There are two sprints held on Dubai World Cup night, one on the "dirt" and one on the turf. The $2 million Dubai Golden Shaheen (G1) is the feature sprint event on the card, contested at 1200 meters (about 6 furlongs) around one turn of the Tapeta main track. Top American hope The Factor was sent off as the 2-1 favorite in the field of 12, off his wins in the Malibu (G1) and San Carlos (G2) both at Santa Anita. In to challenge him included 5-2 second choice and defending champion Rocket Man, winner of the Kranji Stakes in Singapore, and 7-1 third choice Lucky Nine, winner of the Queen's Silver Jubilee Cup (G1) at Sha Tin last out.

Jockey Felix Coetzee sent Rocket Man to the lead and he led the field through quick fractions of 23.83 and 46.54 while pressed by Giant Ryan. Rocket Man led to mid-stretch through 5/8 in 58.38,. but 8-1 Krypton Factor who stalked the pace 4th early, passed the pacesetter to win by 2 1/4 lengths in 1:10.79. It was another 2 lengths back to Lucky Nine third, while favorite The Factor raced near the back of the field early and could not recover, checking in sixth. 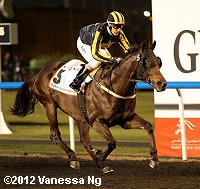 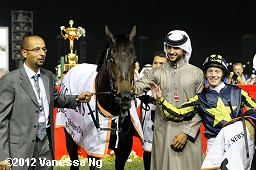 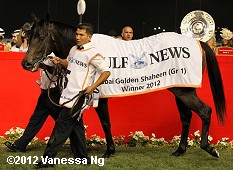 Left: Krypton Factor in the winner's enclosure. Trainer Fawzi Nass said, "He had never faced competition as tough as this, but we still felt confident going into the race. We knew there would be a lot of pace, so thought it would be best to sit off it. Then Kieren angled him out and that was that. We may go to Singapore next and we'll be thinking about Royal Ascot as well depending on how things go."

Right: Krypton Factor heads back to the barn wearing his winner's blanket. Jockey Kieren Fallon said, "This horse has continued to improve all through the Dubai World Cup Carnival, and I knew he was in good form. He was always going well for me tonight and I'd love to ride him at Royal Ascot." 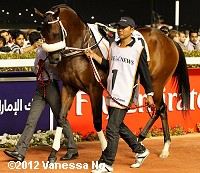 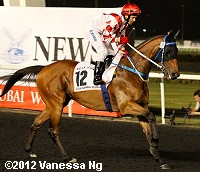 Left: Second place finisher Rocket Man in the walking ring. Jockey Felix Coetzee said, "He's such a professional. Going to the start he was composed. He knows exactly what's going on. I really wanted to get a good start. He flew out so fast and he landed in front of them and he was going well in front. The American horse (Giant Ryan) pressed him, which wasn't ideal but he never stopped."

Right: Third place finisher Lucky Nine warms up before the race. Jockey Brett Prebble said, "A super run but it was very hard to make up ground on that track. It seemed to be spongy underneath but he ran absolutely as well as he could." 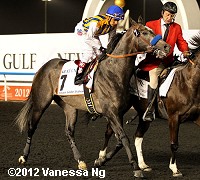 Beaten favorite and sixth place finisher The Factor in the post parade. Jockey Rafael Bejarano said, "My horse had all the opportunity to get on the lead or pretty close. He was too relaxed. My horse never showed me anything. He was really tired the whole race."

The $1 million Al Quoz Sprint (G1) is contested at 1000 meters (about 5 furlongs) on the turf straightaway at Meydan. A field of 15 older horses went to post with 7-year-old mare Ortensia sent off as the 5-2 favorite off consecutive wins in the Begona Belle at Flemington and the Winterbottom (G1) at Ascot in Australia. In to challenge her included 4-1 second choice Regally Ready, winner of the Breeders' Cup Turf Sprint (G1) but 13th in the Meydan Sprint last out, and 6-1 Sole Power, off a close second in the Meydan Sprint.

11-1 Addictive Dream and 36-1 Monsieur Joe battled for the lead exiting the chute through an opening quarter of 24.12. On the main part of the course, Monsieur Joe held the lead through a half in 46.08, but Ortensia, on the far outside after breaking slowly out of the 10 hole, closed with a rush to win by 1 1/4 lengths over Sole Power in 57.98. It was just a neck back to Joy and Fun third. 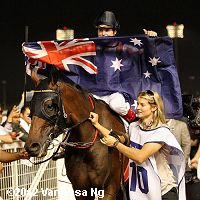 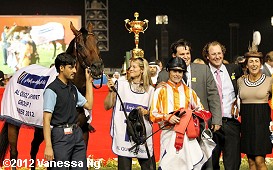 Left: Jockey Craig Williams celebrates with the Australian flag as Ortensia heads to the winner's enclosure. Williams said, "I have had 20 rides on the mare for four wins – she has been unlucky in a few but she was brilliant today. I knew her strengths and I knew her weaknesses. This was not a surprise, I know her ability. The race didn't pan out exactly but I was able to get her into the open so she could use her ability. She will go to Royal Ascot."

Right: Ortensia with her happy connections in the winner's enclosure. Trainer Paul Messara said, "I had my heart in my mouth. I can't believe she has won it. I jumped so high when she hit the line I lost my phone! At the 400m I was sweating bullets because I thought she would be a lot closer but Craig knew what he was doing. He knows her so well. She goes to England in 7 days and she is going to run in the King's Stand Stakes at Royal Ascot (possibly facing fellow Australian Black Caviar) over the same distance." 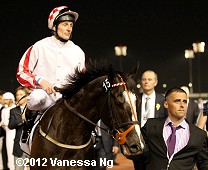 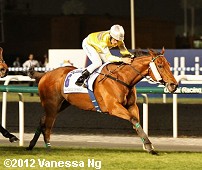 Left: Second place finisher Sole Power in the walking ring before the race. Jockey John Murtagh said, "I thought I had it won. The Australian mare just flew past me."

Right: Third place finisher Joy And Fun on the rail at the finish. Jockey Brett Doyle said, "He missed the start then I had to hustle him forward. I led at about the 50 metres and had no extra late on. If I hadn't missed the start, I'd have gotten second."