The $1 million Godolphin Mile (G2) on Dubai World Cup night featured a field of 12 older horses go 1600 meters (about 1 mile) around one turn of the Tapeta synthetic track at Meydan Racecourse in Dubai. African Story, winner of the Burj Nahaar (G3) after finishing a close third in the Firebreak (G3), the two local preps for this race, was sent off as the 3-5 favorite over 6-1 second choice Western Aristocrat, third in the Hollywood Derby (G1) last out after winning the Jamaica Handicap (G1) at Belmont Park, and 9-1 third choice Red Jazz, unraced since finishing second in the Lennox Stakes (G2) in July at Goodwood.

Jockey Silvestre De Sousa sent 13-1 Do It All to the lead exiting the chute and he was soon joined by Red Jazz, as the pair contested the pace through opening fractions of 25.54 and 48.93. On the turn, Do It All tired and dropped back, while jockey Frankie Dettori sent favorite African Story to challenge Red Jazz through 3/4 in 1:13.03. African Story quickly opened up on the field, cruising under the line 4 lengths in front of late-running 23-1 Viscount Nelson in 1:37.52 over the fast Tapeta track. It was another 1 3/4 lengths back to pacesetter Red Jazz third. 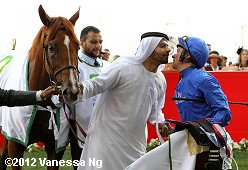 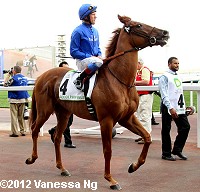 Left: African Story in the winner's enclosure with trainer Saeed bin Suroor and jockey Frankie Dettori celebrating with a kiss. Suroor, winning his eighth Godolphin Mile said, ôIĺve always said this was our best chance of the night. I was really pleased how he looked coming into the race. There are lots of options open to him and he is likely to come back to England."

Right: African Story heads out to the track before the race. Jockey Frankie Dettori, celebrating his seventh Godolphin Mile win said, "It was a push-button result for me. He had won his prep well and had a good draw." 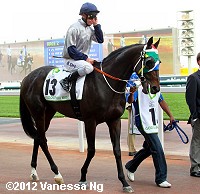 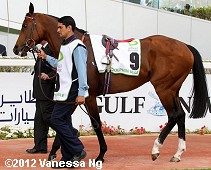 Left: Second place finisher Viscount Nelson heads out to the track. Jockey Kevin Shea said, ôNever going to beat the winner, so finishing second was as good as a win. Really excited about the run.ö

Right: Third place finisher Red Jazz in the walking ring. Trainer Charlie Hills said, "He ran a great race after a long lay-off, lack of match fitness just told. We'll get him home and go from there, it's only the beginning of the year, he's in the Lockinge and the BMW in Hong Kong so we'll have a look." 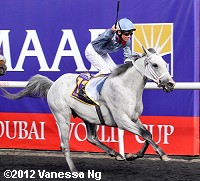 The first race on Dubai World Cup night is the $250,000 Dubai Kahayla Classic (G1), a 2000 meter (about 1 1/4 mile) trip over the Tapeta track for Purebred Arabian horses. Albar Lotois was loose on the lead through fractions of 28.53, 55.75, and 1:22.56 over the fast Tapeta while stalked by Fryvolous and Dariya. Entering the lane, Dariya took over the lead briefly, getting the mile in 1:50.46, but the race set up for the closers. The only American-bred in the field, TM Fred Texas, was 8th early but closed strongly and finished 1 1/4 lengths in front of Seraphin du Paon in 2:17.13. It was another 3/4 length back to Timadit Al Mels third. 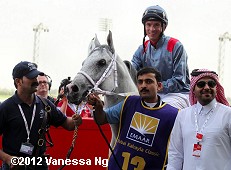 To the right is TM Fred Texas in the winner's enclosure. Jockey Adrie de Vries said, ôI was a bit concerned about the draw but I was able to get him settled nicely behind Richard Hills (aboard Versac Py) from there, I was never really concerned. He is a bit long in his coat, but it wasnĺt too hot today, so he didnĺt lose too much energy. This horse only came to Qatar a month ago from America and I was chuffed to ride him and to win this race again.ö Trainer Ron Martino added, ôI knew he would beat these if he was in good enough shape. Hats off to my assistant, Hector Castellano, he has been here six weeks with the horse in his hands. I expected to win. Heĺs just all horse, a classy animal who gives 110 per cent.ö