On Saturday night, the Breeders Crown Open races for older horses were contested at Mohawk Racetrack. Racing conditions were ideal, with clear skies, a dry fast track, and cool temperatures as night fell, with a very light tailwind through the homestretch. Each race was carded at the standard 1 mile distance, two turns around the 7/8 mile track at Campbellville, Ontario. 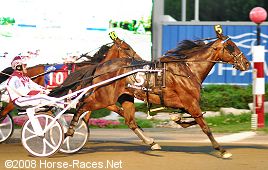 Kicking off the Breeders Crown races was the $638,580 Open Trot. Elimination winner Enough Talk was sent off as the 3-5 favorite in the field of 10 over Classic Trot winner Corleone Kosmos at 3-1, who finished in front in this race last year but was disqualified to second for breaking stride in the final yards. Enough Talk was quickest away and got the initial quarter in 27 seconds before 9-2 Arch Madness and driver Brian Sears settled in front of him for the backstretch trip. Arch Madness got the half in 55 2/5 and 3/4 in 1:23 4/5, leading the field into the stretch. Corleone Kosmos and driver John Campbell, who sat in midpack fifth early, came out for the drive and closed well, getting up to win by a length in 1:51 4/5. It was another 1 1/4 lengths back to 9-1 Digital Image third, while favorite Enough Talk faded late to finish fourth. 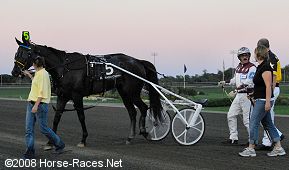 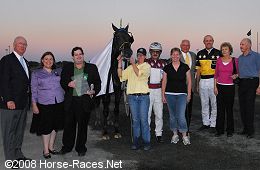 Left: Corleone Kosmos heads to the winner's circle after the race. Last year he broke stride right before the finish and was disqualified from first to second. Winning driver John Campbell said, "He just didn’t keep his mind on his work right through the wire last year. It was disappointing. But a little bit of redemption. He came back and finished the job off tonight. I was fortunate enough to get cover going around the last turn following Enough Talk, and then when I tipped him out, he did the rest. He has won some races on the front but he’s better coming at horses. I think that was the key to the race, being able to follow Enough Talk going around the last turn."

Right: The connections pose with the trophy in the winner's circle. Owner Bryan Owen said, "Much better than losing. Redemption is sweet. He got the total perfect trip for him, and when he got out at the top of the stretch I thought this is our race to lose! It took 30 years to win a Breeders Crown. Boy, that is one expensive trophy." 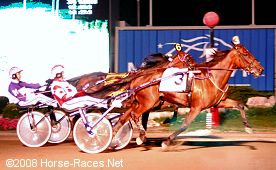 In the $266,075 Open Mare Trot, Conway Hall Stakes winner Falls for You was sent off as the 9-10 favorite in the field of 10 over elimination winner and 2-1 second choice Brigham Dream, and 7-1 third choice Bruschette, third in the Conway Hall then second in the elimination. At the start, the heavy favorite Falls for You broke stride which took her out of contention immediately. 20-1 Susies Magic opened up a 1 1/2 length lead on the clubhouse turn, getting the quarter in 27 3/5 before Bruschette took over on the backstretch. Bruschette with driver Ron Pierce got the half in 56 3/5 and 3/4 in 1:25 3/5. Brigham Dream, who raced back in sixth early with driver Luc Ouellette, came out wide into the lane to pass tiring horses, getting to the front at the 3/16 pole and was all-out to hold off Susies Magic by just 1/2 a length in 1:53 2/5. It was another 4 lengths back to 56-1 Exotic Destination third, while favorite Falls for You trailed the field the whole way and finished last, beaten 32 lengths. 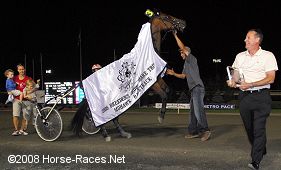 Brigham Dream wasn't very cooperative with the winner's circle photos. Winning driver Luc Ouellette said, "She's a lady isn't she? In the past she'd make a quick break and I would just have to twist the lines a bit and that would get her back to trotting. She did it on me again tonight but I got her back trotting, and we got a win." Winning trainer Nick Vandenplas added, "I’ve been with her since she was born, raised her, weaned her, and trained her. It sure will be sad to see her leave." She will race for new owner Mike Gulotta's Deo Volente Farm in the near future, and Ouellette will retain the drive. 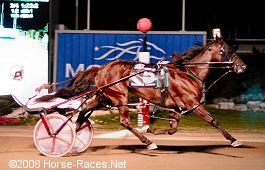 A field of ten distaffers contested the $352,815 Open Mare Pace. My Little Dragon, winner of the Artiscape and the Classic Distaff at Meadowlands, was sent off as the 8-5 choice despite being winless at Mohawk in 7 tries. In to challenge her included 2-1 second choice Southwind Madonna, winner of the elimination last week, and 9-2 third choice Tidewaterdragonfly, winner of the Roses Are Red Stakes at Mohawk in June but fourth in the elimination for this race. 23-1 Hana Hanover opened up a 1 1/4 length lead on the clubhouse turn with Southwind Madonna giving chase, through a quarter of 26 4/5, before Southwind Madonna took over the lead on the backstretch, getting the half in 55 1/5 and 3/4 in 1:23 2/5. Turning for home, Southwind Madonna tired and dropped from contention, as My Little Dragon, who had stalked the pace out wide in third the whole way with driver Brian Sears, passed the pacesetter at the 3/16 pole. She opened up through the stretch to an impressive 2 1/4 length victory over late-running 5-1 Darlins Delight in 1:50 1/5. It was another 5 1/2 lengths back to Hana Hanover third. 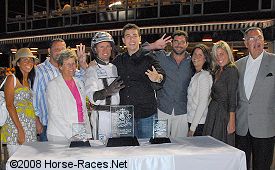 The trophy presentation with all the winning connections celebrating My Little Dragon's third Breeders Crown win. Winning driver Brian Sears said, "She’s a great mare, no question about it. It's her third Breeders Crown. She's raced with the best all her life. It's a great effort. She's just a great mare, it speaks for itself. I knew she could handle it, she's been razor-sharp. She doesn't mind the first over occasionally. At the head of the lane I kicked the (ear) plugs and she was gone." Trainer Mike Vanderkemp added, "It's always a pleasure to have her around. She's such a great horse and she proved that tonight. It's funny, she's very lazy, Brian will tell you that, but the last six weeks she's been very aggressive in the warm-up which is not like her, and she's been racing good so hopefully she stays that way." 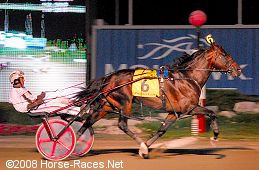 Closing out the Breeders Crown Open Divisions for 2008 was the $532,150 Open Pace. As expected, Mister Big was sent off as the 2-5 choice, entering the race off a five race winning streak including the Haughton and U.S. Pacing Championship at the Meadowlands and then the Canadian Pacing Derby at Mohawk last time out. In to challenge him were 3-1 second choice Artistic Fella, winner of the Classic Pace at the Meadowlands but sixth last out in the Canadian Pacing Derby, and 11-1 third choice Western Shore, second in the Canadian Pacing Derby. Driver Tim Tetrick behind Artistic Fella went to the front immediately and set the pace of 26, 54, and 1:22 1/5 while as many as 2 lengths ahead of 27-1 Tigerama in second. Entering the stretch, Mister Big and driver Brian Sears, who had settled in fourth out wide most of the way, closed the gap and took over the lead at the 1/8 pole. Mister Big drew off late to win by 3 1/2 lengths over Artistic Fella in 1:50. It was another 3/4 length back to 29-1 Kenneth J third. 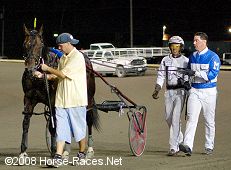 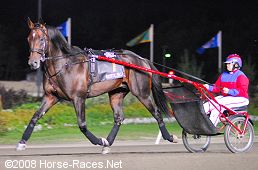 Left: Mister Big returns after the race with driver Brian Sears and trainer Virgil Morgan Jr. following him. Joe Muscara, Jr, son of winning owner Joe Muscara said, "My dad has owned over 300 horses in his life and he says this is the one that has the whole package. He has everything -- he’s fast, he’s tough, he’s smart and you can race him any way you want. We put a huge base of training under him this winter and this is only his ninth race (this year) so he’s as sharp as he’s ever been. You think maybe he will throw a bad race in and he never does. As long as he’s happy and healthy we will keep racing him, and bring him back next year; my dad’s 84 and likes to watch him race."

On to the 2008 Metro Pace, She's a Great Lady, and Simcoe Stakes also on the card.