The fall Breeders Crown card settles the year-end championships for the 2 and 3-year-old divisions, with eight races contested at Meadowlands Racetrack on Saturday night, each at the standard 1 mile distance. With temperatures in the mid 30's and no wind, the track was fast and conditions were ideal for harness racing's biggest night, with $4.7 million in purses up for grabs, with most of the races drawing the maximum field size of ten. A crowd of 10,254 was on hand at the East Rutherford oval. 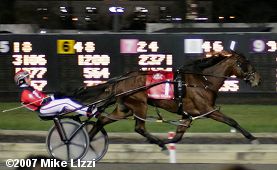 Kicking off the Breeders Crown races was the $650,000 Two-Year-Old Filly Pace. A field of 8 lined up behind the starter with Chancey Lady sent off as the 11-10 favorite over 2-1 A and G'sconfusion. Chancey Lady was wide on the first turn then took over the lead on the backstretch getting the half in 56 seconds while being stalked by 9-2 third choice Stylish Artist. However, in the stretch she tired badly and faded to finish a disappointing ninth, as Stylish Artist took over the lead inside the 1/8 pole to win by 1 1/2 lengths over 18-1 longshot Up From Bethann in a time of 1:53. It was just a head back to 8-1 Dragonfest in third. 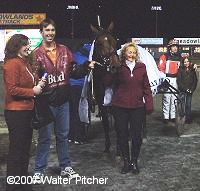 Winning driver George Brennan said, "Everything just worked out perfect. It's tough to map out any trip, but this is how I mapped it out. Try to seat everyone, I knew Mark (driver MacDonald) would come and we would get a good trip. I was lucky to get a seam up the inside and finish it off. She's a quality filly and it's a heck of a way to finish the season" 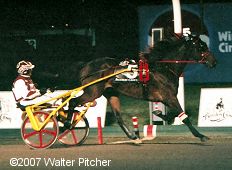 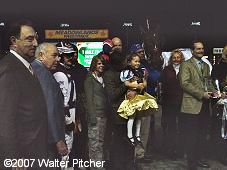 Her driver John Campbell, who became the first driver to reach $250 million in earnings, said "She came to her first baby race with exceptional ability. She takes huge steps with her gait. There's no waste of motion. Her manners are good. I wouldn't ask for more as a driver, and I'm just very fortunate to get to drive her. She's the best two-year-old I've driven, male or female. She's head and shoulders above any two-year-old trotter I've been associated with." Trainer Kevin Lare added, "It's just been a great ride, words can't explain it. We've had a blast. We're having fun with it, and we just hope to repeat next year." 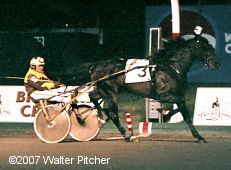 The $650,000 Two-Year-Old Colt and Gelding Trot featured a field of ten, with Deweycheatumnhowe sent off as the 3-5 favorite over 6-5 second choice Lear Jetta. Deweycheatumnhowe was parked wide on the first turn but got to the pylons on the backstretch while setting fractions of 28 4/5, 57 1/5, and 1:28 1/5. When asked by driver-trainer Ray Schnittker, he opened up a 2 3/4 length lead in mid stretch and easily held off late-running 29-1 longshot Celebrity Secret to win by a length in 1:57 2/5. It was another 2 lengths back to Lear Jetta in third. 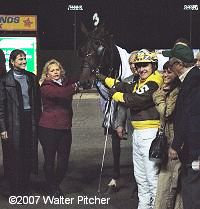 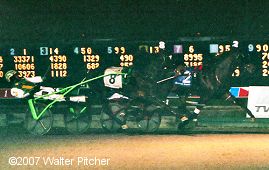 The $650,000 Two-Year-Old Colt and Gelding Pace also saw ten line up behind the starter, with Sand Shooter sent off as the even-money favorite over 2-1 Santanna Blue Chip. Santanna Blue Chip led the field around the clubhouse turn getting the quarter in 27 4/5 but was soon passed by Sand Shooter on the backstretch, who got the half in 55 3/5 and 3/4 in 1:24 1/5. Sand Shooter looked homefree, opening up a 1 1/4 length lead in mid stretch, but Santanna Blue Chip fought back to get up by a nose in 1:51 3/5. It was 1 1/4 lengths back to 6-1 Robert's Rage in third. 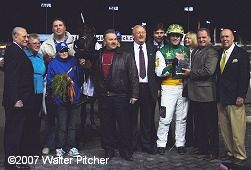 Winning driver and co-owner Jody Jamieson said, "I was anxious that's for sure. I was trying to buy my way out of the two-hole at the head of the lane and George (Brennan) still had some pace left and I had to wiggle out of there. He had kind of an eventful week. He fell down training this week, so he is just kind of living the Shark Gesture dream from last year and you know he raced huge again. (Roberts Rage) was all over my back on the last turn and you know Mark (MacDonald) did the right thing. I figured he'd come up first up on the favorite. He drove the horse smart and ended up third." 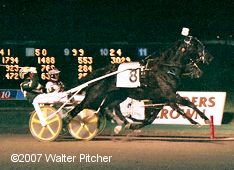 The $500,000 Three-Year-Old Filly Trot saw two well-matched fillies at short odds, 7-5 Pampered Princess and 2-1 Falls For You, in a field of ten. The race looked like it belonged to Pampered Princess, who led the field most of the way through fractions of 59 and 1:28 1/5. When asked by driver John Campbell she opened up a 1 1/2 length lead in mid stretch, but 50-1 longshot Southwind Serena, who had stalked her in second the whole way, angled out to pass and wore her down late to pull off the upset by 1/2 a length in 1:55 2/5. It was another 3 lengths back to Falls For You in third. 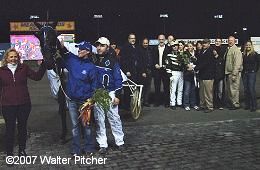 Winning driver Yannick Gingras said, "We didn't have to use her too much early. As soon as I crossed over I knew Pampered Princess was behind me, John (Campbell) was moving her to the front so I was trying to take it easy on the fractions. I didn't think I was going to win it, but you know I was hoping to be second or third that way. With the fractions I knew it was going to be a sprint. At the top of the stretch I felt pretty confident. I was waiting for as long as I could. I was waiting for Pampered Princess to get tired a little bit because she was trotting really strong at the top of the stretch but half way down the stretch she was coming back to me a little bit so that's when I made the move." 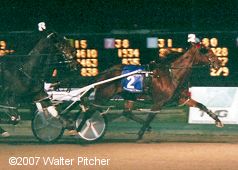 The $500,000 Three-Year-Old Filly Pace featured a full field of ten including 4-5 favorite Southwind Tempo. 7-2 second choice Artcotic took over the lead entering the backstretch and set fractions of 55 2/5 and 1:23 while favorite Southwind Tempo sat just behind her in second. Southwind Tempo came out wide on the far turn to pass, drawing even with the pacesetter in mid-stretch but tired late eventually finishing fifth. Artcotic was all out o hold off the late move of 32-1 longshot Real Velocity to get the victory by a neck in 1:51 2/5. It was another length back to 51-1 Elusive Prey in third. 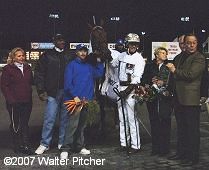 Winning driver Brian Sears said, "They were coming from everywhere. This filly was really game to the wire. I thought myself she might be done at the head of the lane but she kept on digging. She really impressed me tonight. She did what I really though she could do. I used her hard getting to the front and she was super." 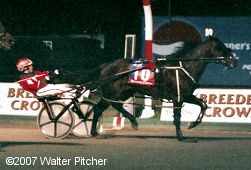 The $555,000 Three-Year-Old Colt and Gelding Pace featured North America Cup and Little Brown Jug winner Tell All taking on Cane Pace and Messenger Pace winner Always A Virgin, each going off at short odds of 8-5. Always A Virgin led most of the way with Tell All close up in second through a half in 53 2/3 and 3/4 in 1:21 2/5. However, the two favorites tired from their pace battle, setting the stage for an upset. 43-1 Artist's View, who was double-parked on the far turn, took over the lead in mid stretch and held off 16-1 Watta Hotshot by a neck for the win in 1:50 4/5. It was another 2 1/4 lengths back to 42-1 Forensic Z Tam in third. Tell All was eighth and Always A Virgin ninth. 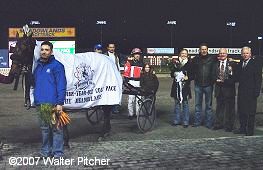 Winning trainer George Brennan said, "I had a decent enough cover to get me through the middle to last turn, then I had to go wide with him. It was the same spot I had last week (in the elimination) and you know, funny enough, he was going to win that race last week but I just hit him the wrong way with the whip and he didn't like it and made a break. We were just hoping for a good draw, which we didn't get, and Buzz (trainer Sholty) made a little change with his shoes and he was real good tonight. It was a dogfight to the wire, but it was a good horse race. Putting it all together and for him to still be around in November, that's a great tribute to the trainer and the horse himself; just keeping himself fit." 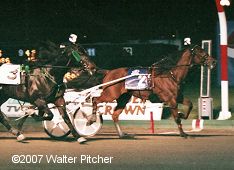 Closing out the Breeders Crown for 2007 was the $610,000 Three-Year-Old Colt and Gelding Trot, with Donato Hanover sent off as the 7-10 favorite over 2-1 Arch Madness. Donato Hanover led the field down the backstretch through a half in 56 2/5 and 3/4 in 1:24 4/5, while Arch Madness was parked wide in fourth early. Arch Madness was wide on both turns but closed well through the lane to win by a neck over 9-2 Flirtin Man in 1:52 4/5. Pacesetter and favorite Donato Hanover faded late to finish 1 1/4 lengths back in third. 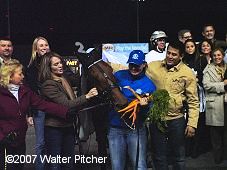 Winning driver Brian Sears said, "It was pretty much the same scenario as last week. I knew I was going to come first up. My horse is just razor sharp. Trond (Smedshammer) has just done a super job and everyone involved with the horse has done a great job. When I pulled him he just couldn't wait to get along side of (Donato Hanover). I just tried to tight rein him a little bit, but he came down the lane and just really raced incredibly tough. He's razor sharp and he was really game tonight." Trainer Trond Smedshammer added, "I'm just stunned. I can't describe this horse. I never expected him to be that good, even last week. I honestly didn't really think he could do it again. He's going to have off now for seven to eight weeks, and then he'll start training again for next season. He won't race until May the earliest."