Saratoga Race Course may have earned the moniker "Graveyard of Favorites" but on Saturday night, that title belonged to The Meadowlands in New Jersey, during the 2004 Breeders Crown Open events. In the four Crown races on the card, not a single favorite hit the board, including two at odds-on. Clearly it was a night of upsets and a crowd of 15,148 was on hand to try and cash in on the big pay-offs.

In the $552,500 Breeders Crown Open Pace, nine lined up behind the gate after Mini Me was scratched sick earlier in the day. Multiple stakes winner Four Starzzz Shark was bet down to prohibitive 1-10 favoritism, with show wagering canceled. When the field got underway, 12-1 shot Royal Mattjesty was sent to the front by driver John Campbell, and he set a blistering pace of 26 1/5, 52 1/5, and a track-record 3/4 mile time of 1:19 3/5. The favorite settled in fourth, just two lengths off the pace but parked out wide around the far turn, trying valiantly to keep up as driver Mike Lachance expected the pace to back up to him in the stretch. That didn't happen. Through the lane, 21-1 shot Boulder Creek with Ron Pierce came on strong, catching the pacesetter inside the 1/8 pole and won going away by 2 1/4 lengths in 1:48 1/5. It was a dead heat for second between Royal Mattjesty and late closer Peruvian Hanover, while Four Starzzz Shark flattened in the stretch and finished seventh. Obviously bridge-jumping was in order, as the winner paid $43.60 to win but a whopping $147.80 to place. 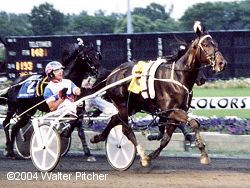 Boulder Creek out front in the Pace. Winning driver Ron Pierce said, "We weren't racing for a check; we were racing to win," said Pierce. "We were in a real sweet spot (behind Royal Mattjesty] and the horse felt real good. I was kind of licking my chop, but I wasn't sure what Mike (Lachance with Four Starzzz Shark) was up to back there, and I turned for home, we had some room. The horse had plenty of pace. Like I said I don't know what happened to Mike."

Winning trainer Mark Silva said, "This is the first time we drew halfway decent. And we were going to take a shot from there. He's a beautiful horse. He always draws badly so he hasn't gotten a chance to shine. I'm really proud of him winning this race tonight. He finally got a chance to shine like he deserves. He always races well. He stays in the race. I'm awfully happy." 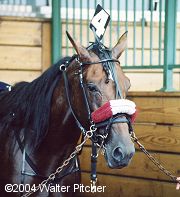 Beaten favorite Four Starzzz Shark in the paddock before the race. His driver Mike Lachance said, "I don't know what happened. It may have been the pace going to the half in 52. He was having a very tough time keeping up. There was just too much pace today. I don't know what was wrong, but he was very hyper today. Maybe he has the touch of a cold. He didn't score down well at all. I couldn't get him calmed down; he was just too much on the iron."

In the $250,000 Breeders Crown Mare Trot, a race that had gone on hiatus for several years but was reintroduced for this year's running, a field of seven top distaffers lined up behind the gate for the traditional mile lap around the Meadowlands track. As expected, Stroke Play was set off at odds of 1-5, off her six-race winning streak, and as in the last race, show wagering was canceled. Instead, 13.60-1 shot Armbro Affair took over the lead around the first turn after a quarter in 28 1/5, then held off the late bids of 8-1 shot Lost Lady One at 18-1 Gypsy Balance to win by a neck in 1:54 1/5 over the fast track, giving driver Ron Pierce two wins in a row. Stroke Play just didn't have it today, settling back in sixth early on and then showing no rally through the stretch. 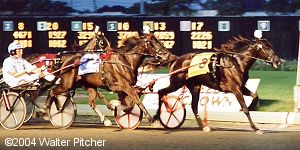 A tight finish with Armbro Affair a neck in front of Lost Lady One with Gypsy Balance just behind. Winning driver Ron Pierce said, "Bob (trainer Bob McIntosh) told me she going to get a lot better for the race. I had a lot of confidence in her. I raced her at Lexington and a couple other times last year and I really liked her. She beat the best of them a couple times. So I was kind of high on her coming into this race. I just kind of moseyed on back to the top. I didn't really have to chase her. She did it on her own. We no sooner got to the top and here comes Cat (Manzi with Lost Lady One) so I had to start her up again. I used her three times before the 5/8, and then we had to hold them off to the wire."

Trainer Bob McIntosh said, "I had a real good feeling tonight. With these trotting mares, you've just got to aim them at certain events and sometimes it works out, and sometimes it doesn't. But tonight it worked out. Ron gave her a great drive and the mare was sharp. Everything worked out right. I just had a strange suspicion she would come up with a big effort."

Brian Sears, driver of beaten favorite Stroke Play, said, "I liked where I was at, but they didn't come home any. "She had trouble keeping up on the last turn, so I didn't like my chances in there."

The $300,000 Breeders Crown Mare Pace featured a large field of eleven, including such luminaries as Bunny Lake and defending champion Eternal Camnation. This was a much more contentious field, with favored Burning Point sent off at a lukewarm 3-1, and only four of the 11 going off at double digits. However, it was one of those four who would steal the day, as 20.5-1 shot Always Cam rallied from fifth early off the quick early pace of Burning Point to win going away by 1 3/4 lengths over 5.60-1 shot Bunny Lake. It was another 1 3/4 lengths back to 5-1 shot Loyal Opposition. The final time was a stakes-record 1:49 2/5. Burning Point faded badly in the final furlong to finish ninth, beaten 7 1/2 lengths, despite holding the lead at the top of the stretch. 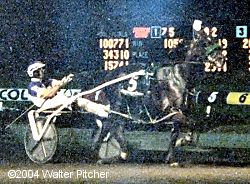 Always Cam alone at the finish. Winning driver David Miller said, "She really hasn't been the luckiest horse, for me anyway. She's gotten a lot stronger, matured a lot. I figured with the big field, I'd be out the whole way and I ended up being a lot closer. She felt good the last turn. She kicked home; she always gives a good effort. We got the jump on Bunny Lake. She was pacing strong through the stretch. I felt pretty confident 10 feet from the wire." 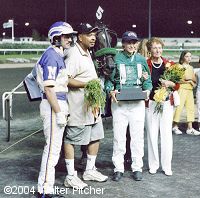 Capping off the evening of upsets was the richest race on the card, the $800,000 Breeders Crown Open Trot. A field of ten went to post in this event, including 1.90-1 favorite and two-time Open Trot winner Fools Goal. However, the race had the wildest stretch run of the night. 9-1 shot War Paint looked home free at the midpoint of the stretch, 1 1/2 lengths clear of 4-1 shot H P Paque after 3/4 in 1:23, but War Paint broke stride at about the 3/16 pole, forcing driver John Campbell to take him inside the pylons. He eventually finished ninth. Meanwhile, 9-2 shot Elegant Man was rallying well down the center of the track and was up to second by the 1/8 pole and had the lead for a moment when he too broke stride, leading to a sixth place finish. With this "luck" H P Paque trotted home to an easy 1-length victory in 1:52 2/5 over 9-2 shot Legendary Lover K. It was another 1 3/4 lengths back to 55-1 shot Bebop, who finished with broken equipment, and 2 1/2 lengths more back to favored Fool's Goal. 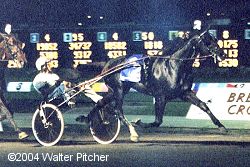 H P Paque winning the Trot. Winning driver Brian Sears said, "He's a really handy horse. He's got high speed on both ends of it. I just stepped him out of there. We got a good trip; it just worked out. We were going pretty good at the final turn, around the turn, I see John's (Campbell with pacesetter War Paint who broke in the stretch) get a little rough. It definitely looked like I was going to get out. I was fortunate enough not to get tangled up with John when he did go off stride. The horse fired home good." 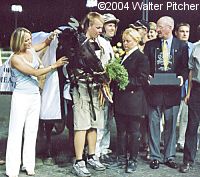 The happy connections in the winner's circle. H P Paque was very interested in getting those carrots. Winning trainer Trond Smedshammer said, "That one made up for the night. At least Brian listens when I tell him what to do. I told him that's absolutely the trip that this horse needs. I said not to move him and he didn't. It was exactly the trip he needed to win that race."