On Saturday night, the Breeders Crown Open races for older horses were contested at Mohawk Racetrack in Campbellville. Racing conditions were ideal, with a dry fast track and cool temperatures as night fell, with almost no wind. 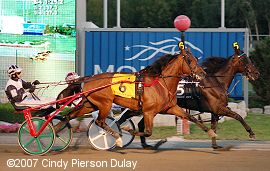 Kicking off the Breeders Crown races was the $784,080 Open Trot. Nat Ray winner Corleone Kosmos was sent off as the even-money favorite in the field of seven over 2-1 second choice Equinox Bi, runner-up in the Nat Ray after shipping over from Italy. Corleone Kosmos was sent to the front soon after the start by driver John Campbell, and he set the pace of 27 3/5, 57 3/5, and 1:25 2/5 while as many as 2 1/2 lengths clear of the balance of the field. 65-1 longest shot Muscles Marinara and Equinox Bi stalked him down the long backstretch. Entering the lane, Muscles Marinara faded from contention as Equinox Bi quickly closed the gap. Corleone Kosmos dug in and held off Equinox Bi by a margin of just 1/4 length in a track-record tying 1:52 for the mile trip over the fast track. It was a long 6 lengths back to 5-2 third choice Vivid Photo in third. However, Corleone Kosmos broke stride with about 40 yards to go, and finished the race off-stride. After reviewing the video of the stretch run, the judges disqualified him to second for a lapped on break, handing the win to Equinox Bi. 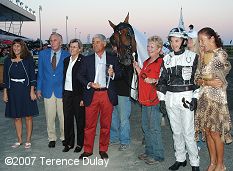 The connections pose with the trophy in the winner's circle. Winning owner Mauro Biasuzzi said, "This horse has the potential to be as great as Varenne. He is even better on the front, you can't pass him on the front but I never tell the driver how to drive. I have driven him myself, but I am an amateur driver and respect the horse, I have never hit him with a whip. He will stand stud in Italy as he did when he was off a year ago. But Italians would rather breed to a mediocre American stallion than a good Italian-bred horse." Biasuzzi is undefeated in 4 Breeders Crown starters, his previous 3 being Nalda Hanover, Jean Bi, and Personal Banner (the dam of Equinox Bi). He added, "Every Breeders Crown we've raced, we've won. It's a good record. We were lucky in the stretch, but the horse was good. He raced very good. The first turn, it was very good for Trevor (Ritchie, driver) to go inside. The horse was strong." 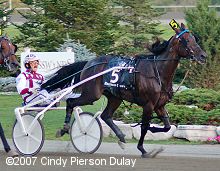 Corleone Kosmos breaks stride shortly before the finish. Darren McCall, trainer of beaten favorite Corleone Kosmos said of the break, "I could see it was going to happen a 100 yards before. He just lost his trot. The track is real hard and his feet were stinging him. It is a real bad way to lose any race, let alone the Breeders Crown." Driver John Campbell added, "He just rolled off. He did that some last year, but not so far this year, until now. It just happened at an inopportune time." 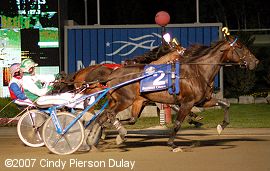 In the $270,000 Open Mare Trot, elimination runner-up Passionate Glide was sent off as the 9-5 favorite in a field of ten over defending champion Mystical Sunshine at 5-2, winner of her elimination heat last weekend. 18-1 shot Birminghim was sent to the front by driver Jody Jamieson and she set a pace of 27 3/5 and 56 3/5 while as many as 1 3/4 lengths clear of the field. 9-2 Snazzy Millie stalked her most of the way down the backstretch. After 3/4 in 1:25 3/5, Birminghim faded from contention as Passionate Glide, who had raced in fourth early, came out wide on the turn to take over the lead in mid-stretch. However, Mystical Sunshine closed with a rush to nail her at the line, getting the victory by just 1/2 a length in 1:54 2/5. It was another 1/2 length back to Snazzy Millie in third. 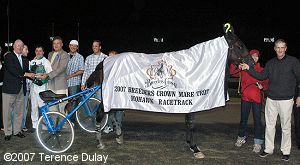 Mysitcal Sunshine in the winner's circle. Winning driver Daniel Dube said, "We got a very good trip and she closed remarkably well in the stretch. I was able to come second over and had good cover. I didn't want to use her too early. We were able to get free in the stretch and she was the best coming home." Trainer Chris Ryder added, It is just a tremendous thrill to win the Breeders Crown with her. I've won two of them and she has won both of them, and she will always have a place in our hearts. She's a hard driving mare and has overcome a lot of problems. She probably will not be making too many more starts. I think she is going to sell at Harrisburg this fall. She's been great for the owners. Mr. (Sidney) Korn has been great and although we lost Mr. (Alvin) Jacobson (who died earlier this year), it was great to win for some nice people." Korn added, "It's very emotional for me. It hurts to see her win this way and Alvin wasn't here to see it. He was the one who picked this horse out and he loved her. I hope that in some way he knows what happened. I think we'll put her in foal somewhere next year. I think she's had enough." 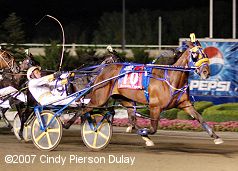 A field of nine contested the $392,400 Open Mare Pace, with elimination winner Ideal Weather sent off as the lukewarm 5-2 favorite over 3-1 Armbro Dancer and 4-1 Darlins Delight. Driver Ron Pierce sent Armbro Dancer to the lead right away and she set a pace of 26 3/5, 55 2/5, and 1:23 3/5 while Ideal Weather settled 1 3/4 lengths behind saving ground along the pylons. However, the fast pace up front set the race up for the closers. Armbro Dancer and Ideal Weather both faded in the lane, while 9-1 Moving Pictures, wide throughout, came out widest of all down the stretch, getting to the front and holding off 17-1 Double Dream N to get the upset win by a length in 1:51 2/5. It was another 1 3/4 lengths back to 15-1 Free in third. Favorite Ideal Weather finished seventh. 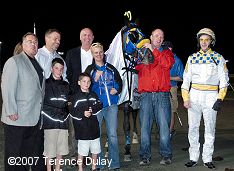 Moving Pictures in the winner's circle. Winning trainer Casie Coleman, celebrating her first Crown win, said, "I've been in the Breeders Crown three times before and have never won it, and it seems like we always get the ten-hole. This is just an unbelievable feeling and she raced great tonight. The mare never gets an easy trip. She hasn't missed a check all year long but has never had an easy time of it. She's a very lazy mare who really doesn't like to train. She's had an abscessed tooth all year that we've been working on, and other than that, she's been okay." Driver Mark MacDonald added, "I had to take a shot with her. In these races you rarely get a good shot, and with the mares being this tough, it was imperative that I moved her when I did. She's got a great late kick and coming off that last turn, I was still last and just hoping for a good check. I've always wanted to win a Breeders Crown before and to do so now, well, it's just an unbelievable feeling." 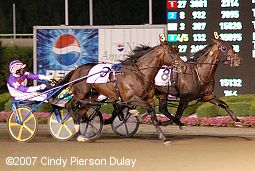 Closing out the Breeders Crown Open Divisions for 2007 was the $540,000 Open Pace. Eight top older pacers lined up behind the starter, with Canadian Pacing Derby winner Lis Mara sent off as the 4-5 favorite over Artistic Fella and Mister Big, each sent off at 3-1. Artistic Fella, breaking from post 8, was wide around the first turn but took the lead right away, setting fractions of 26 1/5, 54 3/5, and 1:22 2/5 while as many as 1 3/4 lengths clear of 8-1 Boulder Creek in second. Driver David Miller asked Mister Big for run having stalked the pace in third the whole way. Mister Big closed with a rush but Artistic Fella held him off at the line by just a nose, in 1:49 2/5. It was another 1 3/4 lengths back to 28-1 outsider Zooka in third, while favorite Lis Mara was fourth. 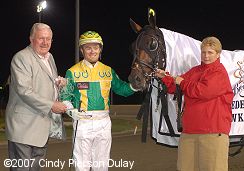 Artistic Fella's connections with his trophy. Winning driver Tim Tetrick said, "It was a very tight finish, but I'm sure glad we got there first. It was good for this horse to go back and race in some Opens and get his confidence level back up. It's obviously paid off for him, because he was razor sharp tonight. This horse was very strong throughout the mile and I kept waiting and waiting for a bunch of horses to come at him, but that never really happened until right at the end, when we had to battle Mister Big. It was a great race. My dream was to become a driver and compete at the highest level, and that's happening now, so I'm just riding the wave while I can. It's great." Winning trainer Steve Elliott added, "I have such a good team and good horses, that's what you need to win these kind of races. He's always been a good horse but it is tough to jump from three to four, though Mister Big has done it as well. It's a deep crop and he fits in well with them." 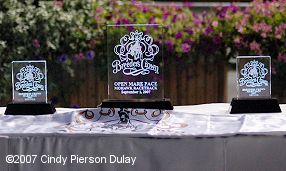 The trophies and winner's blanket for the Open Mare Trot. Each race had the same trophies which are a large slab of etched crystal with a lighted base. The winner also got a special lead shank.