The fall Breeders Crown card settles the year-end championships for the 2 and 3-year-old harness divisions, with eight races contested at Woodbine on Saturday night. Steady showers mixed with ice pellets fell most of the evening with a stiff headwind through the homestretch and chilly temperatures in the 30's and windchill below freezing. As expected, most of the races drew the maximum field size of ten. A notable absence from this year's Crown is driver John Campbell, who suffered a broken leg in a spill during the running of an elimination race last weekend. 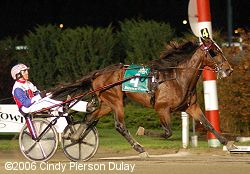 Kicking off the Breeders Crown races was the $683,100 Two-Year-Old Colt Trot. Elimination winner Donato Hanover was sent off as the 3-5 favorite off an outstanding 7 for 8 record going into the race, with Laddie sent off as the 3-1 second choice in the field of ten. 11-1 shot Mythical Lindy battled up front with 114-1 outsider Stunt Man Hall through fractions of 28, 57, and 1:26, while Donato Hanover was unhurried back in seventh taking a wide trip throughout. Driver Ron Pierce asked the favorite for run on the far turn and Donato Hanover responded, taking over the lead inside the 1/4 pole and drawing away to win by 4 lengths in 1:56 over 24-1 Relentless Duke and 21-1 Adrian Chip. 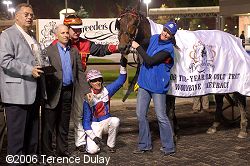 Winning driver Ron Pierce said, "I just wanted the race to set up and I was going to float him up there and ask him to go turning for home, and that's what we did. He's a beautiful colt, just gorgeous. I never even let him trot tonight; he's got real nice manners." Asked about an incident on the turn when Adrian Chip drifted out on him, Pierce added, "I had a big grip on him and wanted to float him up there. He threw a step at me and I had to gather him, but he didn't mean anything by it."

The $569,250 Three-Year-Old Filly Trot saw a field of ten line up behind the starter, with Passionate Glide sent off as the 3-10 favorite off a record of 13 wins in 14 starts this year. In to challenge was 3-1 second choice Pure Ivory, with the rest of the field at double digit odds. 20-1 longshot Susies Magic led the field around the clubhouse turn through a quarter in 27 4/5, then Pure Ivory took over the lead midway down the backstretch, getting the half in 56 4/5. Passionate Glide and driver Ron Pierce stalked the pace in second most of the way. At the top of the stretch, Passionate Glide took over the lead and looked to be home free, but early pacesetters Susies Magic and Pure Ivory came on again. In a blanket finish, Susies Magic prevailed in a stunning upset by a head over Pure Ivory, with Passionate Glide a neck back in third, in a time of 1:55 4/5. 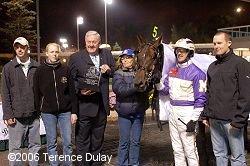 Winning driver David Miller said, "She had trot along the last turn. I turned for home and she felt real well. I tried to angle to the outside and had no room. I got some space, popped her plugs and went right on. I was very surprised." Trainer Tony O'Sullivan added, "I was just happy she was relaxed. Halfway through the lane, she looked like she was traveling as good as anybody. I thought she went a huge mile last week; I thought if we could get her a little quieter she might have a chance." Ron Pierce, driver of beaten favorite Passionate Glide said, "I think she flipped her palate. She definitely wasn't herself tonight. I had to chase her to the top, and when I asked her for some in the stretch she didn't respond. I saw the others coming on the outside and said ‘Uh-oh,' there was nothing she could do." 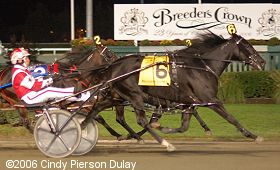 The $683,100 Two-Year-Old Filly Pace saw runaway elimination winner Little Miss Dragon sent off as the 7-5 favorite over 2-1 Cabana Fever, winner of the slower elimination race. 10-1 outsider Hana Hanover led the field around the clubhouse turn through a quarter in 27 seconds before 5-1 third choice Southwind Rio took over the lead midway down the backstretch through a half in 55 2/5. On the far turn, Southwind Rio broke stride and fell out of contention, allowing Little Miss Dragon, who had stalked the pace the whole way, to take over the lead after 3/4 in 1:22 4/5. Cabana Fever had raced back in sixth early and was closing well, taking over the lead from the favorite at the 1/8 pole However, 13-1 shot Calgary Hanover, sixth early, came on late on the outside to win in the final strides to pull off the 1/4 length upset in 1:53.2 over Little Miss Dragon, with Cabana Fever a nose back in third. 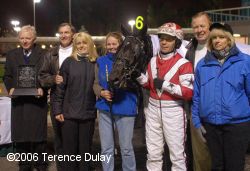 Winning driver Mike Lachance said, "I was about seventh on the rail. A couple fillies got tangled up ahead of me; as soon as they gave me some room, (Calgary Hanover) was flying again. They raced pretty hard up front; with weather like tonight if you use them too hard early they have to come back at the end. I knew if she had a good trip, she was going to get some money; I knew she could come home good." Trainer Don Swick added, "This is great. You couldn't thank Mike Lachance enough, he's just a wizard. This is a dreadfully lazy filly, and from the first time he drove her he made her want to race. I believed all week that with the right trip she could win. It was a pipe dream, but here we are." 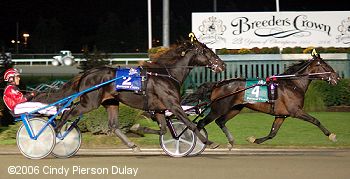 The $569,250 Three-Year-Old Colt Trot saw a classic battle between 3-5 favorite Glidemaster, winner of 2/3 of the Triple Crown, and local hero Majestic Son, the 2-1 second choice with the winner likely to take Horse of the Year honors in Canada. 92-1 outsider Berto Primo was quickest away and led briefly through the first quarter in a slow 29 1/5 into the headwind, before being passed by 7-1 third choice Here Comes Herbie on the backstretch through a half in 57 3/5. Majestic Son stalked the pace in second, while favorite Glidemaster sat in mid-pack fifth down the backstretch. Turning for home, driver Trevor Ritchie and Majestic Son took over the lead and were joined by Glidemaster through 3/4 in 1:24 3/5. The pair battled head to head through the stretch, but Majestic Son dug in late to prevail by 3/4 length in a time of 1:54 2/5. It was a long 2 lengths back to Here Comes Herbie in third. 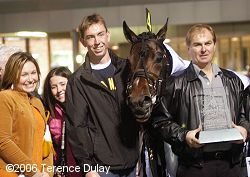 Winning driver Trevor Ritchie said, "I was thinking that I hope I have a big-time horse. He's proved it before, but Glidemaster has never been that close to him at the head of the lane, so I knew it was going to be a battle. They're both champions; we're just fortunate to come out on top." George Brennan, driver of beaten favorite Glidemaster replacing the injured John Campbell, said, "I've never driven this horse before, but to me he was not trotting 100 per cent. He seemed a little sore behind when the speed picked up in the lane and I had to steady him. I'm not saying that's what got him beat. Not to take anything away from the winner, but if this horse had been 100 per cent, I think we would have beat him. He still went good and I'm happy." 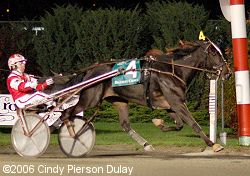 The $683,100 Two-Year-Old Filly Trot saw yet another odds-on favorite, as the undefeated Pampered Princess was sent off at 1-2 over 3-1 second choice Possess The Magic, who was second to Pampered Princess in the elimination. 71-1 outsider Sheer Soul led the pack into the backstretch through a slow quarter of 29 seconds, before Possess the Magic took over after a half in 59 3/5, while Pampered Princess sat back in fourth parked wide on the turn. Driver Brian Sears asked Pampered Princess for her best entering the stretch, as the two favorites hooked up after 3/4 in 1:27 4/5. Pampered Princes poked her head in front at the 1/8 pole but Possess The Magic found something late and pulled away to win by 1 3/4 lengths in 1:57 2/5. It was another 2 lengths back to 16-1 Adelaide Hall in third. 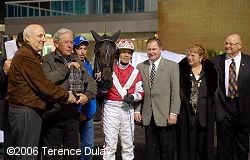 Winning driver Mike Lachance said, "Honestly, I didn't think I could beat (Pampered Princess), but we got away with a half in :59.3 and it was just a sprint in the stretch. She was good and strong tonight. We couldn't do anything with her at the beginning of the year, but now we can do everything we want." Trainer Ron Gurfein added, "I always thought she was as good (as Pampered Princess). I really thought we had a good chance to win it. It's very special." 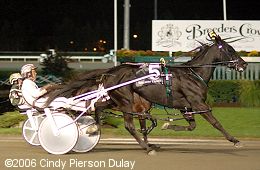 The $569, 250 Three-Year-Old Filly Pace saw two well-matched entrants in even-money favorite My Little Dragon and 7-5 second choice Darlins Delight. 12-1 Arts Temptress led the pack first time past the stands through a quarter in 28 2/5, then Darlins Delight took over the lead entering the backstretch. Loose on the lead by as many as 1 1/4 lengths, she set fractions of 56 2/5 and 1:24 3/5, and looked home free at the quarter pole. However, My Little Dragon, who had raced in fourth early, came out wide on the turn and the pair hooked up inside the 1/8 pole. My Little Dragon dug in late to pull ahead by 3/4 lengths at the line to win in 1:52 3/5. It was a long 6 lengths back to Arts Temptress in third. 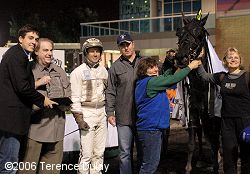 Winning trainer Noel Daley said, "She deserved it. She's had an up-and-down year, but she's been no worse than second. She tries hard. Once we put her on Lasix (in late September) she's been strong." Owner Adam Victor Jr. added, "It feels amazing. She had her problems all year, but to see her win back-to-back Crowns is just amazing. It has been our goal all along and we thought she had one of the greatest two-year-old years a filly could have; and combined years put her with the greatest. You will see her race as an older mare." 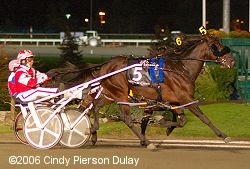 The $683,100 Two-Year-Old Colt Pace featured a well-matched field of nine, with only three entrants going off at double digit odds. Kenneth J was the lukewarm 5-2 choice over 3-1 Olay Olay and 4-1 Artzina. 9-1 Laughing Art was quickest away and got the first quarter in 28 1/5 while 1 1 /2 lengths clear of Olay Olay in second. Entering the backstretch, Olay Olay took over the lead by just a head with 6-1 Charley Barley stalking him in second through a half in 56 1/5. Rounding the far turn, favorite Kenneth J, who raced out very wide down the backstretch, took over the lead and pulled away to a 3 length advantage after 3/4 in 1:23 1/5. However, Charley Barley came on again through the stretch, poking his head in front at the line to win in 1:53 3/5. It was another length back to Artzina in third. 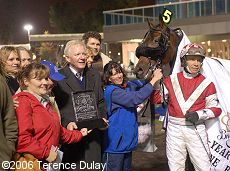 Winning driver Mike Lachance said, "I knew I would have a clear shot in the stretch. I didn't know how much fight he would have in the stretch, but he fought enough." Lachance won three Crown events tonight, increasing his Breeders Crown total to 26 trophies with the victory. Only John Campbell, with 41, has more titles. He added, "I was hoping I could win one, but not three," 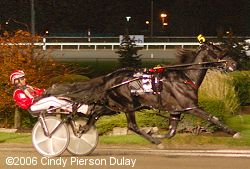 Closing out the Breeders Crown for 2006 was the richest race on the card, the $694,485 Three-Year-Old Colt Pace. Shark Gesture was sent off as the lukewarm 3-1 favorite over 7-2 Artistic Fella and 4-1 Total Truth. Shark Gesture was fastest away and was loose on the lead through a quarter in 28 4/5 and a half in 57 1/5. Turning for home, 9-2 Dave Panlone came out wide and took the short lead getting 3/4 in 1:24. The pair battled briefly, but Shark Gesture battled back in mid-stretch and drew off to win by 1 1/2 lengths over late-charging 9-1 Mister Big who just got up for second. It was another 2 lengths back to Dave Panlone who tired late to finish third. 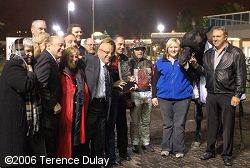 Winning trainer Ervin Miller said, "It was a really rough week. To get him to come back was very special. Everybody was scared of the front end tonight because of the wind; but this big, old colt doesn't care about the wind; he's tough. He sure showed up tonight." In last week's elimination race, Shark Gesture fell as the field crossed the finish line after being interfered with by Total Truth.