On Saturday night, the Breeders Crown Open races for older horses were contested at Mohawk Racetrack in Campbellville. Favorites were the order of the evening for the estimated crowd of 9,300, as odds-on choices won three of the four championship events run in ideal conditions, a dry fast track with cool temperatures as night fell, and a slight headwind in the stretch.

Kicking off the Crown events, the $250,000 (all purses in US dollars) Breeders Crown Open Mare Trot saw a field of eight line up behind the gate, with Peaceful Way sent off as the 2-5 favorite. 5-2 second choice and defending champion Housethatruthbuilt was quickest away at the start, and she got the first quarter in 27.3 entering the backstretch. With a half mile to go, 8-1 shot Windylane Hanover took over the lead by 1 3/4 lengths. Entering the far turn, driver Trevor Ritchie asked Peaceful Way for run and got it. The heavy favorite quickly shot to the front on the turn, getting 3/4 in 1:24.4, and was 2 lengths clear with a furlong to go. 25-1 longshot Mystical Sunshine, unhurried in eighth early, rallied strongly through the stretch but was no match for Peaceful Way, who finished the mile in 1:53.1, the margin of victory 1 1/4 lengths. It was just 1/4 length back to Housethatruthbuilt in third. 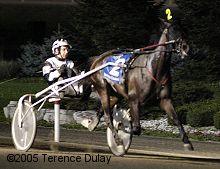 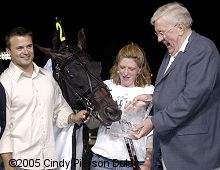 Peaceful Way savors the taste of victory, or at least the taste of her trophy. Winning trainer and co-owner Dave Tingley said, "I'm speechless right now. It's probably the most nervous I've been watching a race. I guess just because this race has eluded us two years in a row. Trevor did a great job. He was patient. She's a great horse, just an amazing mare. She came into this race fresh and healthy. Now that this race is over, we can look forward to, hopefully, the Maple Leaf Trot. But you know just to get the Breeders Crown under her belt is a great accomplishment."

The $331,500 Breeders Crown Open Mare Pace yielded the only "upset" of the night. Burning Point was bet down to 9-10 favoritism in the field of eleven. After rounding the clubhouse turn, driver Kevin Wallis sent Burning Point to the front, and she battled with 5.25-1 fourth choice Glowing Report through 3/4 in 1:22.3. Burning Point held on to a slim lead in mid stretch, but inside the final 1/8 of a mile, 5-1 third choice Loyal Opposition, who raced well back early on, had closed with a rush through the lane and blew right by the favorite to win by 1 3/4 lengths in a time of 1:51 over Glowing Report, who edged 3/4 lengths ahead of Burning Point in the last strides to get the place spot. 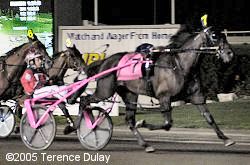 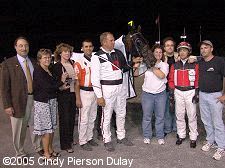 The happy connections pose with Loyal Opposition in the winner's circle. Winning driver George Brennan said, "She has hit a couple of bumps, but she really went a good race last week, first up, with a good back half and only got beat less than two lengths. I was pretty confident. The trip worked out and things went her way. I thought she could win this race."

A field of ten older males lined up behind the gate in the $500,000 Breeders Crown Open Pace. Defending champion Boulder Creek was the 9-10 favorite over 6-1 second choice Ponder. Driver Brian Sears settled Boulder Creek in fourth behind the early pace of Town Champion through 3/4 in 1:22. Turning for home, Boulder Creek took an outside path and circled the leaders, grabbing the lead in upper stretch. In the final furlong, Boulder Creek held off the late charge of 23-1 longshot Georgia Pacific to win his second Open Pace in a row, finishing a length in front in a time of 1:49.1. It was another 1/4 length back to 22-1 shot Mypanmar in third. Second place finisher Georgia Pacific became a millionaire with his earnings from this race. 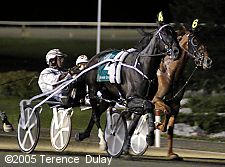 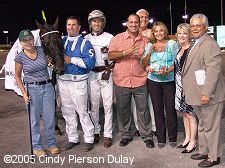 Boulder Creek's connections celebrate his repeat win in the Breeders Crown Open Pace. Winning trainer Mark Silva said, He has become very good in the last month in a half, he has learned how to be a champion, whether it is training or racing, he has just become comfortable with who he is and what he is supposed to do. Tremendously happy with Brian’s drives this year, he has been outstanding. I have complete confidence in him and whatever he decides during the mile is fine. I had no idea how it was going to go but we got a great trip. He's won the Haughton, the Pacing Championship, the Classic final (all at Meadowlands) and we have been fortunate that he has kept in going right through to the Breeders Crown."

The highlight race of the evening was the $800,000 Breeders Crown Open Trot. Just seven showed up in this event, with Mr Muscleman sent off as the 7-10 favorite. With Ron Pierce in the sulky, Mr Muscleman threw down the gauntlet and surged to the front, settling blistering fractions of 26.3 and 54.4 with the field 1 1/4 lengths behind. After 3/4 in 1:23, 5-1 second choice Sand Vic came up alongside to challenge, but Mr Muscleman had another gear left. At the top of the lane, the favorite accelerated yet again to a 4 3/4 length advantage at the 1/8 pole and finished 5 1/2 lengths at the line, completing the distance in a new track record time of 1:52, one second faster than the previous mark. 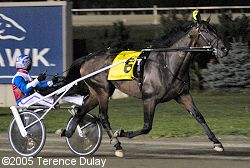 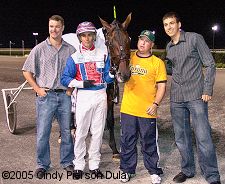 Mr. Muscleman in the winner's circle with driver Ron Pierce and his happy owner and trainer. Winning driver Ron Pierce said, "You never can plan ahead (about going to the front) in races like this because you never know what everybody else is going to be doing. So I kind of made up my mind when the gate was picking up speed. He felt real good (when Sand Vic challenged approaching the far turn). I just sat there. I hadn't even called on him. I looked back and saw there was a big gap behind us just before we straightened up. So I pulled the plugs, yelled at him a little bit and chased him on. Never did touch him with the whip, I don't think. He did it all by himself." Asked about a possible matchup against Mare Trot winner Peaceful Way in the Maple Leaf Trot, driver Ron Pierce said, "I don't think that mare wants any part of this horse." 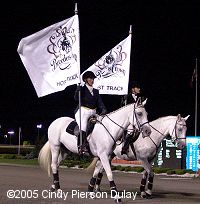 As usual, the girls on white horses led the post parade with the Breeders' Crown banners. 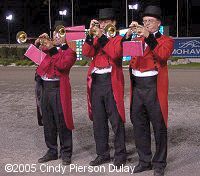 The Bugle Boys entertained the crowd with their playing before the call to the post.