The Breeders Crown older horse races were the feature event on Saturday night at Mohawk, but there were also 4 rich stakes races on the undercard for the younger divisions. Like the Breeders Crown races, all of the stakes events were contested at 1 mile around 2 turns of the fast, banked 7/8-mile oval. The weather was perfect for a night of harness racing, with no wind, clear skies, and cool temperatures. 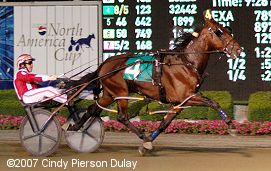 The $1 million Metro Pace is one of the richest races in North America for 2-year-old pacing males. A field of ten lined up behind the starter in this year's renewal, with elimination winner Somebeachsomewhere sent off as the 7-4 favorite over 5-2 Dali and 3-1 Deuce Seelster. When the starting gate pulled away, driver Paul MacDonell did not waste any time getting the favorite to the pylons and on the lead, as Somebeachsomewhere set fractions of 26 3/5, 54 2/5, and 1:21 4/5 while staying at least 1 1/4 lengths clear of 16-1 outsider Santanna Blue Chip in second. Entering the lane, MacDonell asked Somebeachsomewhere for his best and got it, as the favorite opened up a 2 1/4-length lead in mid stretch. 7-2 third choice Moon Beam, who had raced in fifth early, put in a late rally but was no match for Somebeachsomewhere, who cruised under the line 2 lengths ahead in a new world record time of 1:49 3/5 for 2-year-old pacing males. It was another 1 length back to Santanna Blue Chip in third. 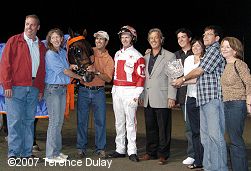 The connections pose with the trophy in the winner's circle. Driver Paul MacDonell, winning his third Metro Pace, said, "I didn't believe (the fractions). The half really shocked me, 54 and a piece. He was just on air doing it, with relative ease. He was so full of himself even going to the 3/4 in 1:21 and a piece. He just had tons. I didn't think he was that much better (than the others, going into tonight). I really didn't. I knew he was a really, really nice colt. I trained him here for Brent (MacGrath) one day and he did what a lot of aged horses probably can't do." Winning trainer Jean-Louis Arsenault added, "It is a dream. I never thought it could happen. It's unbelievable. He's been doing everything perfect. He's done it all. A world record, 1:49 3/5 for two-year-olds in a million dollar pace. Can't ask for anything better." 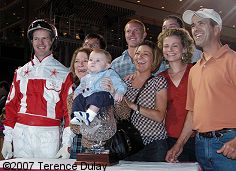 This one was too cute to pass up with the baby sitting on the trophy. 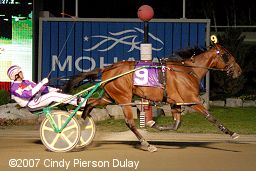 The $782,200 She's A Great Lady Stakes is the filly equivalent of the Metro Pace. Ten 2-year-old fillies lined up behind the gate with elimination and Kentucky Sires Stakes winner Beachy Girl sent off as the 6-5 favorite over 2-1 second choice Thong, winner of the other elimination heat after winning the Eternal Camnation. 26-1 outsider Red In The Face went to the lead first time past the stands and led the field by 2 1/4 lengths around the clubhouse turn through a quarter in 27 2/5. Down the backstretch, driver Tim Tetrick sent Thong to take over the lead and she opened up a 1 1/2-length advantage after a half in 56 seconds. Turning for home, David Miller angled 12-1 shot A and G's Confusion out wide for the drive and drove right past Thong at the quarter pole, getting 3/4 in 1:24 2/5. Through the stretch, A and G's Confusion drew off to win by 2 lengths in a time of 1:51 3/5, a new Mohawk track record for 2-year-old pacing fillies. It was just 1/2 a length back to Red In The Face in third, and 3 more back to beaten favorite Beachy Girl in fourth. 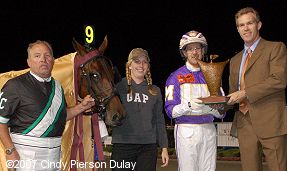 A And Gsconfusion in the winner's circle. Winning driver David Miller said, "I left the gate just trying to fish for a hole, and there was a big two-hole, so I slid in there. It was a moderate pace and I was going along pretty easily. I didn't have to move until I was going into the last turn. She felt good the whole way. When Brian (Sears driving favorite Beachy Girl) came, he was coming slow, so I moved her and she moved with authority. She comes real strong. She was doing it so easily (the record time) kind of surprised me." 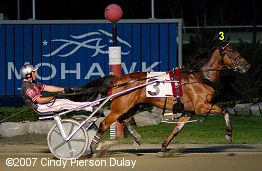 The Simcoe Stakes for 3-year-old trotters was run in two divisions, each with a purse of $138,595. The first division, run early in the evening, saw a field of ten with Arch Madness sent off as the 6-5 favorite off a 25-length victory in a qualifier at Pocono Downs. In to challenge him were 7-2 second choice Photo Maxx, third in the Zwieg Stakes at Tioga Downs last out, and 4-1 third choice Hallo. Hallo led the field around the clubhouse turn through a quarter in 28 1/5 but was son passed by Arch Madness down the backstretch. Arch Madness set fractions of 57 2/5 and 1:27 before drawing away from Hallo to an easy 2 3/4 length win in a final time of 1:55. It was another 1/4 length back to Manfinity in third. Winning driver and trainer Trond Smedshammer said, I didn't really have to use him hard (at the start). I didn't want to rush him out of the gate. He'd made mistakes leaving the gate before. I just wanted to take my time and make my move right past the quarter. He's always had some ability but he's a Balanced Image and they take a little time to learn." Smedshammer said he would go next in the Canadian Trotting Classic. 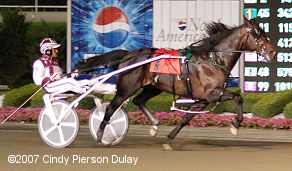 The second division of the Simcoe Stakes closed out the stakes action for the evening, with a field of nine lined up behind the starter. Zwieg stakes winner Flirtin Man was sent off as the 1-2 favorite over 9-4 second choice Laddie, an 18-length winner of a qualifier after finishing third in the Hambletonian. 12-1 Beer Budget led the field by as many as 2 lengths through fractions of 27 3/5, 58, and 1:26 3/5 while being stalked by Flirtin Man the whole way. Entering the stretch, driver John Campbell switched Flirtin Man to the outside as the heavy favorite easily passed the pacesetter, drawing off through the lane to a 3 1/4-length victory in 1:54 4/5. It was another 1/2 length back to Laddie in third. Driver and co-owner John Campbell said, "He's getting much better at getting out of the gate, he had a bit of trouble doing that early in the year. I was close enough to the leaders tonight, and he's a horse that has a real strong brush and can carry his speed very well. He was well in hand and full of trot, he wasn't fully extended tonight. We'll put him in the Canadian Trotting Classic eliminations."