The Breeders Crown older horse races were the feature event on Saturday night at Mohawk, but there were also 4 rich stakes races on the undercard for the younger divisions. Like the Breeders Crown races, all of the stakes events were contested at 1 mile around 2 turns of the fast, banked 7/8-mile oval. The weather was perfect for a night of harness racing, with a slight tailwind through the stretch, clear skies, and cool temperatures. 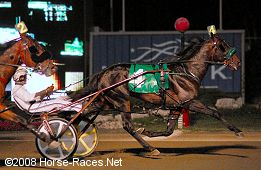 The $1 million Metro Pace is one of the richest races in North America for 2-year-old pacers. A full field of ten lined up behind the starting gate, with elimination winner Annieswesterncard sent off as the 2-1 favorite. In to challenge the son of Western Hanover included 5-2 second choice Major In Art, winner of the Woodrow Wilson at the Meadowlands, and 3-1 third choice Well Said, second to Annieswesterncard in the eliminations after winning condition races at Meadowlands and Mohawk. At the start, Major in Art was quickest away from post 4 opening up a 1 1/2 length lead over 7-2 fourth choice Nebupanezzar on the clubhouse turn through a quarter in 26 4/5. Down the backstretch, favorite Annieswesterncard, wide on the clubhouse turn, took over the front end getting the half in 55 2/5 and 3/4 in 1:22 4/5 with Well Said stalking him in second to his outside. At the top of the lane, Annieswesterncard held a 3/4 length advantage but Major In Art, who had settled in third down the backstretch, came on again, closing with a rush to get up by 3/4 length over Nebupanezzar on the far outside in 1:51 2/5. It was another 1 1/4 lengths back to favorite Annieswesterncard third. 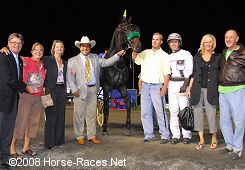 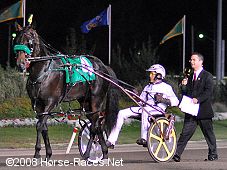 Left: Major in Art and his connections pose with the trophy in the winner's circle. Winning driver Brian Sears said, "He did it on raw talent in the Wilson. He did it on his manners tonight. I got the trip I needed. When I called on him, he was good. He was good in the hole, relaxed good, so I can't take anything away from him. It was a very competitive field. They were doing some racing and it worked out. He's a big strong colt. He's just learning every start." Owner Ernie Martinez of Major In Art Stable said, "The colt has been good since day 1. We just didn't find out how good until later on. He shows class."

Right: Major In Art and Brian Sears return after the race while being interviewed for TV. 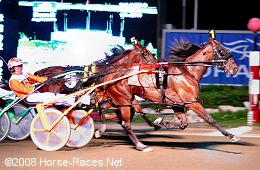 The filly counterpart of the Metro Pace is the $672,000 She's A Great Lady Stakes, for 2-year-old pacing fillies. A field of nine went, with Right Right sent off as the 5-4 favorite coming off a nose defeat in her elimination heat. Pennsylvania Sires Stakes winner Racing Star was the 3-1 second choice over 4-1 third choice Backstreet Sweetie, who defeated Right Right in the eliminations after winning the Whenuwishuponastar at Mohawk. 11-1 Notjustaprettyface was quickest away through a quarter of 27 seconds before Backstreet Sweetie took over the lead down the backstretch through a half in 55 2/5. However, with 3/8 remaining, Backstreet Sweetie broke stride badly and came to a stop, allowing Racing Star, who sat second the whole way, to inherit the lead on the turn through 3/4 in 1:25. Right Right, who sat sixth out wide throughout, found another gear through the stretch and ran right by Racing Star at the 1/8 pole and was all out to hold off 19-1 Break The News on the inside for the 3/4 length victory in 1:53 4/5. It was another 1/4 length back to Racing Star third. 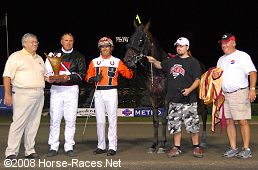 Right Right and her connections in the winner's circle. Winning driver Andy Miller said, "I just didn't want to rush her too much early. I wanted to get away fifth or sixth and work out a nice second-over or third-over trip. Her best game is finishing, so I didn't want to use her up early. I just let her pace on the end of it. It worked out great. We got a great trip and at the top of the lane there was plenty of room and she took off. She's getting smarter about it and a little more manageable. She puts out a good effort every time." 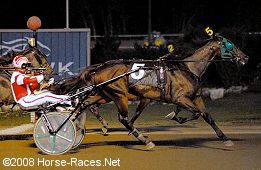 The Simcoe Stakes for 3-year-old trotters was run in two divisions, each with a purse of $132,327. The first division saw just six entered (after 1 scratch), with Don Giovanni, 6th in an allowance last time out. sent off as the 5-4 favorite over 5-2 second choice Smoking Gun, exiting a third in the Zweig Stakes at Tioga Downs. Don Giovanni was loose on the lead the whole way through fractions of 28 3/5, 58, and 1:27 2/7 while as many as 2 lengths clear of the field led by 38-1 longest shot Eternal Elation. Don Giovanni continued to lead to the 1/8 pole, but Smoking Gun, who was fourth early, came on late to just catch the pacesetting favorite at the line by 1/4 length in 1:56 3/5. It was another length back to 3-1 third choice Guida Muscle. Winning driver Luc Ouellette said, "He has matured a little bit and he's a little more aggressive now. At the gate I think he would have liked to take me out of there and possibly get involved, but everything turned out well. We got lucky that there weren't too many horses in the race and I didn't have to come first up with him. I don't think that's his kind of trip. We were able to sit until halfway around the last turn, and just pull out. Even then, John (Campbell, with Guida Muscle) was in and out a couple times, so he had a bit of a target there." 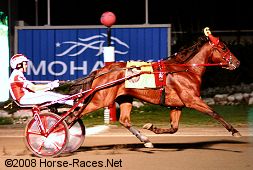 The second division of the Simcoe closed out the stakes action on Saturday night, with a field of seven entered. Canadian Breeders and Ontario Sires Stakes winner Define The World was sent off as the 2-5 choice over 3-1 Atomic Hall, third in the Colonial at Chester last out. Driver Paul MacDonell sent the favorite to the lead immediately and he clicked off fractions of 28, 56 4/5, and 1:26 1/5 while 2 lengths clear of 11-1 McCarron in second. Turning for home, MacDonell asked Define The World for run and got it, as he quickly opened up a 4 length lead at the 1/8 pole. 10-1 third choice Nureyev, fourth early, came on late but was left with too much ground to make up, as Define The World cruised under the line 1 3/4 lengths in front in 1:54 4/5. It was another 2 lengths back to McCarron third. Winning driver Paul MacDonell said, "It's not his best race (on the front end). He likes to come off cover and he's really got a lot of trot off cover, but when you're bet 2-5 it's pretty hard not race him that way. As it turned out he was pretty good and pretty professional about it, and was able to win easy. He's a strong colt. He trots so easily, his gait isn't an effort for him, and he doesn't seem to get tired late in the mile. He had a lot of trot tonight."

On to the 2008 Breeders Crown open races also on the card.