The richest harness race this week was run at Mohawk Racetrack in Campbellville, Ontario on Saturday night, as a field of 9 older pacers contested the $702,000 Canadian Pacing Derby. U.S. Pacing Championship winner Mister Big was sent off as the even-money favorite, coming into the race off a four race winning streak which also includes the Haughton Pace. In to challenge the Virgil Morgan Jr. trainee included Classic Pace winner Artistic Fella at 6-5, second to Mister Big in the U.S. Pacing Championship last time out, and 11-1 third choice Western Shore, winner of the only elimination heat for this race.

Western Shore was off quickly and led the field after the first quarter mile of 27 seconds, with 16-1 Won The West and 39-1 Eagle Luck up close to the lead. Down the backstretch, Artistic Fella, who took the turn wide, took over the lead at the half in 54 1/5, while favorite Mister Big sat back in fifth staying wide throughout. Turning for home, Won The West moved up to a 3/4 length advantage, getting the 3/4 mile in 1:21 4/5 as Artistic Fella began to tire. However, Mister Big closed with a rush on the outside to win going away by 1 3/4 lengths in a time of 1:50 for the mile. It was another 1 1/4 lengths back to Western Shore third. However, Won The West was disqualified from second to fourth for going inside two consecutive pylons, moving Western Shore to second and fourth place finisher Eagle Luck to third. 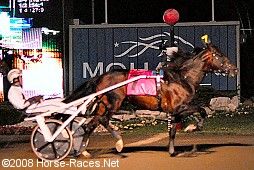 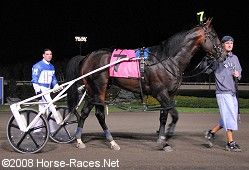 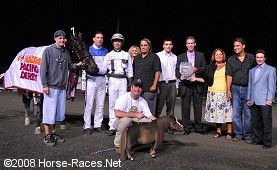 Right: Mister Big shares the winner's circle with Thumbelina, the world's smallest horse. Driver Brian Sears, winning his third Canadian Pacing Derby in a row, said, "It just played out right in my hand, the way the race unfolded. My horse put out a great effort and it just worked out perfect. I just didn't want to get in too big of a hurry back there and rush him at any time. I know he likes to close and he could probably pick them up, the way they were battling. It just worked out perfect." 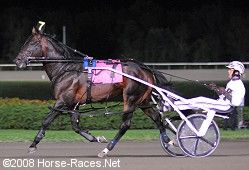 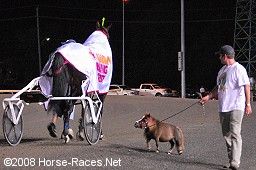 Right: Thumbelina watches Mister Big as he heads back to the barn after the race. 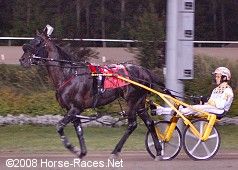 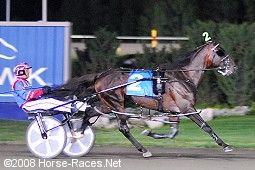 Left: Second place finisher Western Shore in the post parade. 11-1 second choice Western Shore contested the pace the whole way in third with driver Mark Macdonald, but could not improve position, finishing third but moving up to second on the disqualification. The Ervin Miller trained son of Western Hanover improved his record to 4 wins, 6 seconds, and 2 thirds in 19 starts so far this year.

Right: Third place finisher Eagle Luck warms up before the race. The 39-1 longshot saved ground around both turns with driver Sylvain Filion back in fourth, then entered the stretch in fifth, passing the tiring Artistic Fella late to get fourth, but moved up to third on the disqualification. The Gregg McNair trained son of Camluck improved his record to 2 wins, 0 seconds, and 4 thirds in 14 starts so far this year. 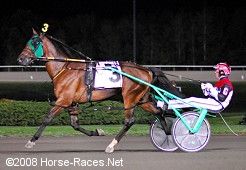 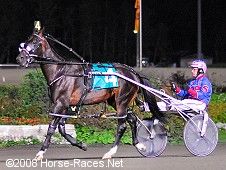 Left: Won the West who finished second but was disqualified to fourth for going inside two pylons during the stretch run.

Right: Artistic Fella was second favorite by only a narrow margin at odds of 1.15-1 but finished a disappointing sixth, fading the the stretch. 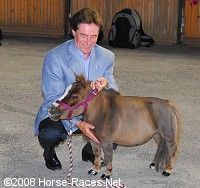 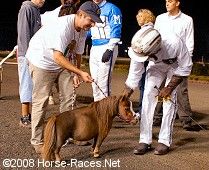 Left: The big star of the night was the tiny Thumbelina, only 17 1/2 inches tall and 57 pounds, the world's smallest horse. Here she is with retired Hall of Fame jockey Sandy Hawley in the winner's circle. The 7-year-old mare tours to raise money for charity and often visits children's hospitals, schools, and shelters. 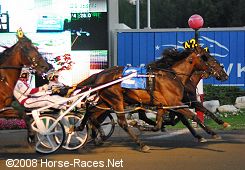 The undercard featured two divisions of the Eternal Camnation Stakes for 2-year-old pacing fillies, with each division running for a purse of $141,800. In the first division, 9-5 second choice In The Game (#2) sat in fourth parked off the pylons behind the pace set by 13-1 Bet On Luck, then came on late between horses to get the win by a neck in 1:55 4/5. Bet On Luck dead-heated for place with 7-1 Break The News, while 8-5 favorite Treasure Keeper broke stride early and finished last.
Results chart Race 3

Winning driver John Campbell said, "She's got a couple of issues with her gait; we've got to get her a little smoother so she's handier when she gets in tough. That'll hurt her if she doesn't, but she's got lots of go to her and she's very game, so she does have the tools to work with. Nifty's (trainer Richard Norman) just got to make some adjustments on her. I don't think it's the track or anything like that. It's just a learning curve for these young fillies, learning how to pace fast. I was concerned about keeping her pacing around that last turn. She got a little bumpy and rough there – I was more worried about just keeping her pacing at that point, but once she got in the lane and straightened up she kicked home real strong." 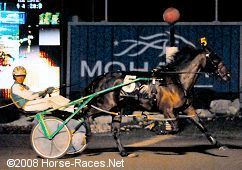 In the second division of the Eternal Camnation Stakes, 7-5 favorite Terroronthebeach did not disappoint, opening up a 2 1/4 length lead on the clubhouse turn and never looking back, cruising to a 1 1/4 length victory in gate-to-wire style in a time of 1:54 3/5. 2-1 second choice West Of L A was second, 1/2 length ahead of 7-1 She's a Fan third.
Results chart Race 9

Winning driver Jody Jamieson said, "I wasn't sure how she'd respond against the top fillies tonight. It was unfortunate (that) she made a break last week. I let her float to the lead and she relaxed good. When I asked her, she really paced hard."