The $2 million TVG Breeders' Cup Mile (G1) featured a field of 13 older horses going 1 mile around 2 turns of the turf course. Fourstardave (G1) winner and Woodbine Mile (G1) runner-up Got Stormy was sent off as the even-money favorite in the field of 13. In to challenger her included 7-2 second choice Uni, winner of the First Lady (G1), and 4-1 third choice Circus Maximus, winner of the Prix du Moulin de Longchamp (G1). 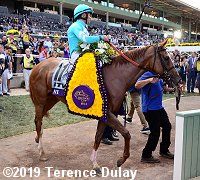 Left: Uni in the winner's circle. Winning trainer Chad Brown said, " She broke right with the first pack and then they ran away from her. Joel did exactly what we planned, which was to break as well as you can and let her find herself in the first turn. Luckily Without Parole moved to the rail for us and we were in the two path and sort of raced as a team down the backside. I just loved where my spot was. Yes, the Turf seems to be very firm, but when they threw that fraction up, I absolutely loved where we were."

Right: The trophy presentation for the Mile. Winning owner Sol Kumin said, "We were really worried about the lack of pace, and Joel did a perfect job, trying to get her over, seeing a little bit of ground in the first turn. I thought he got her going at the perfect time, and the other filly ran unbelievably, Got Stormy. And to watch those two fillies throw down in a race like this, it's one of the ones you'll remember. We'll bring her back next year. The partnership talked earlier this year. It was a no-brainer to bring her back. We talked about potentially trying to go to Ascot, after the race Tepin went to, whether it's a good distance, obviously what you saw." 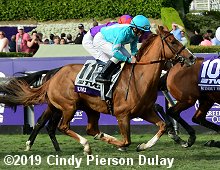 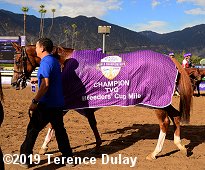 Left: Uni in 10th about 8 lengths off the pace first time by. Winning jockey Joel Rosario said, "We had a perfect trip. The speed got away from me a little on the backstretch, but she was comfortable and in a good spot so I just sat still with her.  I asked her at the three-eighths pole and she gave me a strong run.  That's when I knew we would win. But when we got alongside of her (Got Stormy), she fought back a little. For a minute I thought oh-oh, because she's a very nice filly who beat us this summer. But, my filly still had more left and we pulled cleared her in the last sixteenth."

Right Uni heads back to the barn after the race. Brown added, "Last year after she won the Matriarch she was really stiff after the race so we just gave her the time. The partners were great. She laid down one of the fastest final quarters I've ever seen on a flat trip and she paid the price for it. She was just body sore. So we gave her plenty of time. The partners were great about that, so we waited until she was 100 percent and eased her back to training and got her sound and it all worked out. That was the plan." 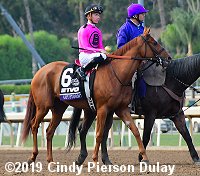 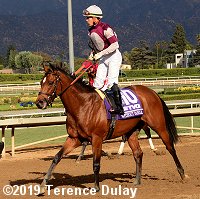 Left: Second place finisher and beaten favorite Got Stormy in the post parade. Trainer Mark Casse said, "Things didn't go as planned in the first turn but I thought Tyler (Gaffalione) did a great job. I thought we might be on the lead or sitting right off of it but it looks like a few others had that idea. So he had to choose to sit back which, is her best race. (Tyler) said he could hear Uni coming and he shot a little early, but she just beat us. I'm proud of her. She's turned out to be a hell of a filly."

Right: Third place finisher Without Parole returns after the race. Trainer Chad Brown said, "I thought he ran terrific. So proud of him. Then again he came to us in outstanding condition and I think he'll improve. If I had a little more time and another piece of work or two and who knows what would have happened today. He could have been a little closer. I think he's going to stretch out. I really do. I spoke to John Gosden whom I have enormous respect for and he thought he would stretch out as well. I was really pleased with the condition I got this horse. It's no surprise because it's John Gosden. He takes great care of his horses."

The horses break from the gate for the Mile. Aidan O'Brien, trainer of 4th place finisher Circus Maximus (9) said, "We lost a bit of ground at the start and I think at the end he was feeling the effects of the long season. He'll be a really nice horse next year."