Keeneland Race Course in Lexington had its "FallStars" opening weekend, which included nine Breeders' Cup Challenge "Win and You're In" stakes events. Conditions were excellent on Saturday for its 5 stakes races, with sunny skies and temperatures in the mid 80's. There were two stakes on Friday, the Darley Alcibiades (G1) and Phoenix Stakes (G2) won by British Idiom and Engage, plus 3 more on Sunday including the Juddmonte Spinster (G1) and Bourbon Stakes won by Blue Prize and Peace Achieved.

The highlight event on Saturday was the $1 million Shadwell Turf Mile (G1) for older horses looking for automatic entry to the Breeders' Cup Mile. A full field of 14 went 1 mile around 2 turns of the Haggin Turf Course with Valid Point sent off as the 2-1 favorite, undefeated in 3 starts including the Secretariat (G1) at Arlington. In to challenge him included two horses at 6-1, Bandua, 3rd in the Arlington Million (G1), and Admission Office, 3rd in the Wise Dan (G2). 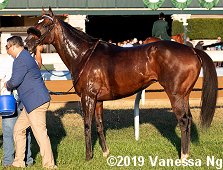 Left: Bowies Hero in the winner's circle after the Shadwell Turf Mile. Josh Flores, assistant to winning trainer Phil D'Amato said, "About a million dollars (purse of Shadwell Turf Mile), compared to $200,000 (for the City of Hope Mile at Santa Anita) We've always had the confidence in this horse. He's had some tough trips. Today, Flavien was able to put him in the right spot and he was able to fly home. It will be nice to walk over – probably (as) one of the favorites – right out of your own barn (at Santa Anita). And to win one at Keeneland is always special."
Right: Bowies Hero heads back to the barn. Winning jockey Flavien Prat said, "I thought I had a good trip. My horse broke well – better than the other day (fifth in the Del Mar Mile). I was able to put myself in the race, was able to tip him out around the turn and get him ready to make his run. And then he got the job done. (The battle between several horses right at the wire) was great. When you win, it's great. When you get beat, it's frustrating. He always gives you everything he has." 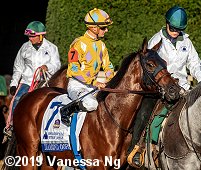 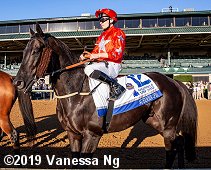 Left: Second place finisher Diamond Oops heads out to the track before the race. Jockey Julien Leparoux said, "We were close to the pace, broke very sharp. Settled nice on the backside. He ran big today. It was a close finish for second and he ran a big race for sure."

Right: Third place finisher Suedois in the post parade. Jockey Jamie Spencer said, "The draw (12 hole) was a big handicap to my horse, probably the difference between winning and losing. He's run good. He's an 8-year-old. The trainer (David O'Meara) has done well with him." 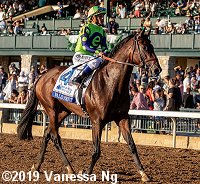 Left: Tenth place finisher and beaten favorite Valid Point returns after the race. Jockey Javier Castellano said, "I tried to find room and get a spot in the race. Turning for home, I tried looking for a seam. I tried to get a jump but it was a lot of traffic. It was a big step up today for a young horse. I think he ran huge in the Secretariat. We tried to step up a little bit and maybe get lucky but it was a tough race. I'm not disappointed, I think he's a good horse. Sometimes you have to test the waters a little bit."

Right: The horses break from the gate for the Shadwell Turf Mile. 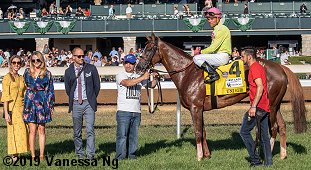 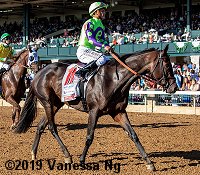 Left: Uni heads to the winner's circle. Whit Beckman, assistant to winning trainer Chad Brown said, "It's another addition to her tremendous career as a miler. She's real solid when she's put at this distance and she's gone to multiple tracks and has shown that kick." Winning jockey Joel Rosario said, "At some point I thought (Rushing Fall) would have a little more speed than me and I'd be looking to see where she was and probably follow her and she'd put me in a good spot. In the first turn, it looked like they were going pretty good speed, and I just followed Rushing Fall. (Uni) came with a nice run like she always does. She's unbelievable. She has a long stride and she just kept coming."

The $500,000 Claiborne Breeders' Futurity (G1) is a "Win and You're In" race for the Breeders' Cup Juvenile, with a field of 10 two-year-olds going 1 1/16 miles. Debut winner Gouverneur Morris was the 3-2 favorite over 3-1 Tap It To Win, who won at second asking at Saratoga last out, and 7-2 Ajaaweed, another winner in his second attempt at Belmont Park. 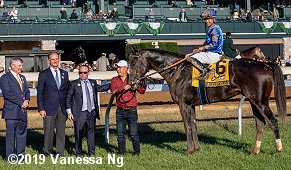 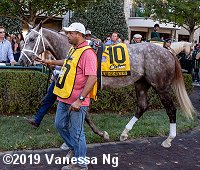 Left: Maxfield in the winner's circle. Winning trainer Brendan Walsh, celebrating his first Grade 1 win, said, "He's a very special horse. I've been around a lot of good horses, and good horses breathe different air. I think this horse is right there. I thought he might take a run or two to break his maiden, but we knew he was a super-talented horse. He overcame a lot the first day we ran him (maiden win at Churchill Downs), and he came out of that race doing so good. To come back in three weeks for a horse that's only run once is a big ask, but he answers every question. Obviously, we'll see how he comes out of this (before a decision on the Breeders' Cup Juvenile), but if you don't bring him, who do you bring? Winning jockey Jose Ortiz said, "He's a very nice horse and he's very smart. He broke slow first time, took dirt and came running at Churchill. Today, he did the same thing. Broke a bit slow, relaxed and when I asked him to go, he was there for me the whole time."

Second place finisher and beaten favorite Gouverneur Morris. Jockey Javier Castellano said, "It was a good trip. Unfortunately, we were kind of wide in the first turn, but that's hard to deal with breaking from the outside post. He broke well enough to get into a good spot. We were just second best today. He earned it and fought for second place, but the winner was the best horse in the race."

The $250,000 Thoroughbred Club of America Stakes (G2) is the Breeders' Cup Challenge race for the Filly and Mare Sprint, contested at 6 furlongs for older fillies and mares. Roamin Rachel Stakes winner Chalon was sent off as the 2-1 favorite in the field of 9 over 4-1 Spiced Perfection, unraced since 4th in the Humana Distaff (G1), and 5-1 Ours to Run, 3rd in the Honorable Miss (G2).

11-2 fourth choice Talk Veuve to Me set the pace of 22.14 and 45.21 while pressed by 11-2 Mis Mischief and stalked by Chalon. Turning for home, Talk Veuve to Me continued to lead through 5f in 57.61 but tired. Spiced Perfection, 6th early under Javier Castellano, came through between horses in the 3 path to win by a head over late-running 11-1 Dawn the Destroyer in 1:10.60. It was another 1 1/2 lengths back to Mis Mischief third. 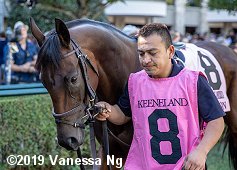 Left: Spiced Perfection in the winner's circle. Winning co-owner Bob Flynn said, "This horse has been great ever since she started racing. Eighteen races now, eight wins and she just never quits. (Guaranteed entry in the Filly and Mare Sprint) sounds great. Sounds wonderful. I've never had one in the Breeders' Cup." Winning jockey Javier Castellano said, "She stumbled really bad coming out of the gate. She recovered pretty quick and we kept tracking the speed. We got through a little, tiny hole at the eighth pole. The filly was very brave to go through that hole and get it done."

Right: Fourth place finisher and beaten favorite Chalon in the paddock before the race.

The $200,000 Woodford Stakes (G3) Presented by Keeneland Select featured a field of 9 older horses sprinting 5 1/2 furlongs on the turf but is not a Challenge event. Kentucky Downs Turf Sprint (G3) fourth place finisher Imprimis was the 7-5 favorite over 5-2 Leinster, winner of the Troy Stakes (G3), and 4-1 Extravagant Kid, winner of the Da Hoss at Colonial Downs.

Jockey Leandro Goncalves sent 30-1 Satellite Storm to the lead through fractions of 21.18 and 44.21 while pressed by 21-1 Fareeq and stalked by Extravagant Kid and Leinster. Turning for home, Leinster gained the lead through 5f in 55.74 but 15-2 Stubbins, last early under Joel Rosario, rallied late to win by 3/4 length in a new course record 1:01.44, just 9/100 second faster than the previous mark. It was another 1 1/2 lengths back to favorite Imprimis third. 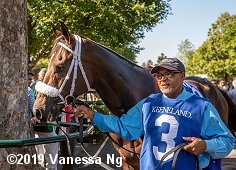 Left: Stubbins in the winner's circle. Winning jockey Joel Rosario said, "Today, it looked like there was good speed in front. There was good speed at Kentucky Downs, too, but it was a bit different – the horse that won (Legends of War) had a tremendous race. (My horse) came running and was a good second. Today, he came running and put in a good run there at the end. I tried to stay in (on the rail in the turn). I was saving ground and then when I had some room was able to turn him loose."

Right: Third place finisher and beaten favorite Imprimis in the paddock before the race.