The feature race on the first Sunday of the Keeneland fall meet is the $500,000 Juddmonte Spinster Stakes (G1), a Breeders' Cup "Win and You're In" qualifier for the Distaff. Light rain fell however the track remained fast and turf firm with temperatures in the low 70's. A short field of 5 older fillies and mares contested this 1 1/8 mile event, with Elate sent off as the 7-10 favorite off a close second in the Personal Ensign (G1). In to challenge her included 9-5 second choice Dunbar Road, winner of the Mother Goose (G2) and Alabama (G1), and 15-2 third choice Blue Prize, winner of the Summer Colony after finishing 3rd in the Delaware Handicap (G2). 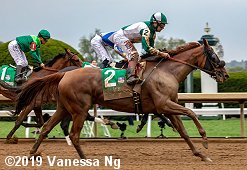 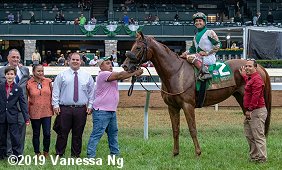 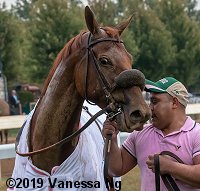 Left: Blue Prize in the winner's circle. Winning trainer Ignacio Correas IV said, "To tell you that I thought I was going to beat Elate, I would be lying. I thought (Blue Prize) was sitting on a great race. She was coming into form. When we went to Saratoga, we were looking to put her in winning mode. We accomplished that (with a victory in the Aug. 18 Summer Colony Stakes). I thought if Joe could relax her and if she had a target, she's going to run big. Elate is a great, great mare."

Right: Blue Prize heads back to the barn. Asked about the Breeders' Cup Distaff, Correas added, "Midnight Bisou is a super filly. Elate is a super filly. There are others. If she gets the trip (in the race), I think she has a shot." 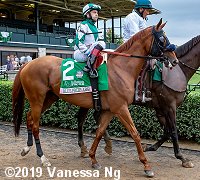 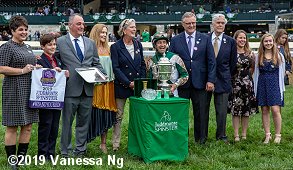 Left: Blue Prize heads out to the track before the race. Winning jockey Joe Bravo said, "Ignacio had her very keen today. He said, ‘Try to keep her quiet. She's ready to go.' After she broke in front, she got back underneath me. There were some really good horses in there, but she was able to (have) a stalking trip and watch them (in front). We've always said she runs great at a target. She listens to me. I really didn't have to do too much. It's fun to be part of a good horse."

Right: The trophy presentation for the Spinster Stakes. 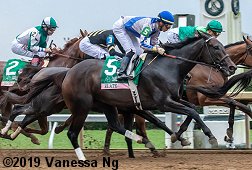 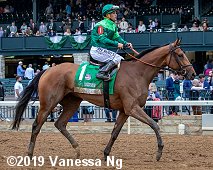 Left: Second place finisher and beaten favorite Elate in 4th place first time by. Jockey Jose Ortiz said, "These mares are very nice. I mean, the winner won the Spinster last year. I've ridden her before. If they run fast, she runs fast. If they run slow, she runs a little slower. But she always finds a way to get to the wire first. About this race, I think I was in a good position the whole way. (Elate) was very comfortable, and we were in a good rhythm. She just got beat."

Right: Third place finisher Dunbar Road returns after the race. Whit Beckman, assistant to trainer Chad Brown said, "She didn't have the easiest post and trip on the inside, but she showed a lot of heart and made the best bid she could. The good news is she's 3 and if all goes well, we'll have her back next year. (The Breeders' Cup) would be a decision that Chad and (owner) Peter (Brant) will figure out." 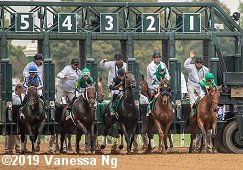 The horses break from the gate for the Spinster.

Immediately before the Spinster, a full field of 14 two-year-olds went to post in the $250,000 Dixiana Bourbon Stakes (G3), a 1 1/16 mile Haggin Turf Course trip and a "Win and You're In" qualifier for the Breeders' Cup Juvenile Turf. Vitalogy was the 9-2 favorite off his 3rd place finish in the Summer Stakes (G1) at Woodbine. In to challenge him included 11-2 second choice Fighting Seabee, winner of the With Anticipation (G3), and 6-1 third choice Gear Jockey, still winless but 2nd in a Saratoga maiden race last out.

Jockey Jose Ortiz sent 7-1 Field Pass to the lead first time by through fractions of 23.20, 47.60 and 1:12.55 while pressed by 9-1 Peace Achieved and stalked by Gear Jockey. Entering the streth Gear Jockey moved up to gain the lead through 1 mile in 1:36.72, but jockey Miguel Mena and Peace Achieved took over inside the 1/16 pole and was all out to hold off deep closing favorite Vitalogy to win by a neck in 1:43.06. It was a length back to Gear Jockey third. 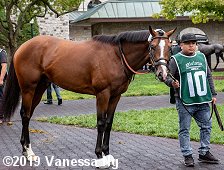 Left: Peace Achieved in the winner's circle. Winning trainer Mark Casse said, "I think he'll like Santa Anita. (Getting into the BC) is great for so many reasons. It's become such a big part of our planning now every year. This is our second (Challenge Series win) this year. It's how we lay out our season. I'm not going to bring him out (to Santa Anita) until maybe a week before. We've had pretty good luck going west and most of the time it's five or six days out (from the race) so we're not going to change that."

Right: Peace Achieved in the paddock. Winning jockey Miguel Mena said, "(Mark Casse) mentioned the inside being a little softer than the outside, so we had a great post position (10 of 14). He came out of there running, and I just stayed a little wider for better ground. He was the best horse today – he's very nice." 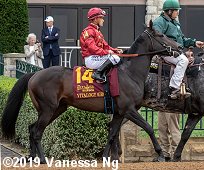 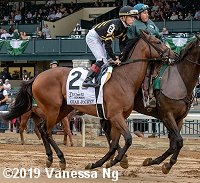 Left: Second place finisher and beaten favorite Vitalogy heads out to the track. Trainer Brendan Walsh said, "From the draw we had, I basically left it up to Javier and what do you do? He was a little wide the whole way, and he traveled a lot farther than the winner. But he ran really good, and the whole objective was to get him into the (Breeders' Cup) Juvenile Turf. I think we probably would get in after today. Maybe we can go there and rectify it." Jockey Javier Castellano added, "He got close to the pace for being 14 wide. I'm very satisfied with the way he did it; in a 14-horse field he gave me a good run. If we had (left the gate) better, we could have won the race. He passed horses."

Right: Third place finisher Gear Jockey in the post parade. Jockey Tyler Gaffalione said, "My horse ran a very good race coming off the maiden, the race where he finished second at Saratoga. He's in good hands with (trainer) Rusty (Arnold) and his team, so we expect great things from him. (The pace) was honest. Everybody was doing it comfortably and we were happy with where we were."

First time by in the Bourbon Stakes showing the entire field.

Kicking off the stakes trio on Sunday was the $250,000 Indian Summer Stakes for two-year-olds sprinting 5 1/2 furlongs on the Haggin turf looking for automatic entry to the Juvenile Turf Sprint. Queen Mary (G2) runner-up and Bolton Landing Stakes winner Kimari was the 11-10 favorite in the field of 9 over 7-2 Chimney Rock, 2nd in the Kentucky Downs Juvenile Turf Sprint, and 4-1 Mystic Lancelot, 9th in the Summer Stakes (G1).

Jockey Gabriel Saez sent 10-1 Fast Scene to the lead down the backstretch through fractions of 21.74 and 45.22 while pressed by 45-1 Johnny Unleashed and stalked by 26-1 Rockcrest. Entering the lane, Fast Scene tired allowing Rockcrest to open up a 2 length lead through 5f in 57.06 but the fast early pace set the race up for the closers. Kimari, last early under Mike Smith, circled the field 7 wide into the lane and rallied to win by 1/2 a length over fellow deep closer Chimney Rock in 1:03.03. It was another 2 lengths back to 64-1 longest shot Axiomo third. 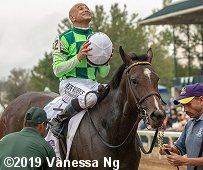 Left: Kimari in the winner's circle. Winning trainer Wesley Ward said, "She broke well in the (Queen Mary at Royal Ascot) and that's the only race she broke well in. That's really what I was concerned about. Julio Garcia has been breezing her from behind horses, knowing today that she'd probably break slow. Julio has been sitting back and coming around horses with her and kind of been teaching her to rate. I really didn't think she was going to be that far back but thank God (jockey Mike Smith is) a cool sitter and a go-getter, and he rode a beautiful race. Everything came through today and we're looking forward to Breeders' Cup."

Right: Jockey Mike Smith celebrates aboard Kimari after the race. Smith said, "Wesley told me although she's extremely fast, she breaks horrible every time. Being in the 2 hole, I thought, ‘Wow, that could be bad.' But he said she'll be OK if that happens. ‘Don't worry about it. Just ride her with confidence.' I take my hat off to him. I did exactly what he told me to do. I rode her with a lot of confidence. When we came off the top of the turn, I just had to show her the stick a little and she just took off."