The feature race on Opening Day of the Keeneland fall meet is the $400,000 Darley Alcibiades Stakes (G1), a Breeders' Cup "Win and You're In" qualifier for the Juvenile Fillies. Conditions were excellent with sunny skies and temperatures in the mid 70's. A field of 11 two-year-old fillies went to post in this 1 1/16 mile event, with Alandra sent off as the 2-1 favorite off her debut win at Saratoga on September 1. In to challenge her included 9-4 second choice Perfect Alibi, winner of the Adirondack (G2) and Spinaway (G1), and 7-2 third choice British Idiom, a debut winner at Saratoga on August 15.

Jockey Tyler Baze sent 65-1 longest shot Spitefulness to the lead first time by and she set fractions of 23.73, 47.27, and 1:13.11 while pressed by 9-1 Sequin and stalked by British Idiom and 36-1 Gone Glimmering. Turning for home, jockey Javier Castellano sent British Idiom 4 wide and she swept to the lead through 1 mile in 1:39.27. Kept to task by Castellano, British Idiom drew off late to win by 6 1/2 lengths over late-running Perfect Alibi in 1:45.80. It was another 3 lengths back to deep closing favorite Alandra third. 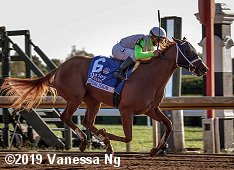 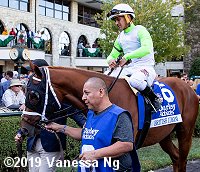 Left: British Idiom in the winner's circle. Winning trainer Brad Cox said, "We were pointing for the Pocahontas (G2) at Churchill, but the week before she came down with a little bug. Nothing major, but (I) just wasn't happy with her bloodwork so we gave her a little time. She's a real laid-back filly. She's a really nice filly that's full of class. She never gets worked up. She does whatever you want in the mornings. She's a good-sized filly, too, and obviously capable of getting around two turns. As long as she comes out of this in good shape, we'll look at (the Breeders' Cup Juvenile Fillies)."

Right: British Idiom in the paddock. Winning jockey Javier Castellano said, "I think good horses can do that. She broke good and got good position. She pulled a little bit, but I liked the way she did it on the backside. She relaxed, kept tracking the horses, and I liked the way she finished. She's a good filly. She's improved and stepped up in class. Credit to Mr. Brad on the way he trained her. Made me look good today." 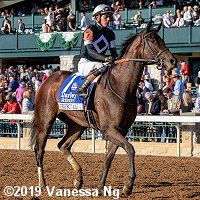 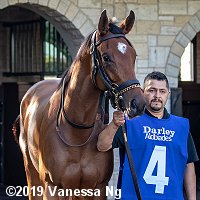 Left: Second place finisher Perfect Alibi returns after the race. Jockey Jose Ortiz said, "Perfect, clean trip, just second best. I was following Javier (Castellano on the winner) but he was still in a good position passing the three-eighths pole and I was already asking my filly to go. It took her a while to get going but when she did I wasn't able to keep up with the winner." Trainer Mark Casse added, "She ran well for her first time going two turns. I think she earned a (chance) in the Breeders' Cup (Juvenile Fillies). She sure didn't embarrass us today."

Right: Third place finisher and beaten favorite Alandra in the paddock. Jockey Joel Rosario said, "She broke a little slow. This is her first time going two turns and only her second start. She came running. She put in a good effort."

Kicking off the Keeneland fall stakes program is the $250,000 Stoll Keenon Ogden Phoenix Stakes (G2) at 6 furlongs, and a "Win and You're In" qualifier for the Breeders' Cup Sprint. Last year's winner Promises Fulfilled was sent off as the 9-5 favorite in the field of 9 off a 6th place finish in the Forego (G1). In to challenge him included 7-2 second choice Recruiting Ready, an allowance winner after finishing 6th in the Bing Crosby (G1), and 4-1 third choice Whitmore, last year's runner-up in both the Phoenix (G2) and Breeders' Cup Sprint (G1), but 8th last out in the True North (G2).

Jockey Luis Saez sent Promises Fulfilled to the front exiting the chute through an opening qaurter of 22.22 before 84-1 longest shot Zipp on By took over on the far turn through a half in 45.43. Turning for home, 46-1 Lexitonian, who pressed the early pace in 3rd, moved up to lead through 5f in 57.69 but 19-2 Engage, 7th early under Jose Ortiz, rwllied 5 wide and outfinished Whitmore to win by 1/2 a length in 1:10.21. It was a nose back to Lexitonian third, while Promises Fulfilled faded to 6th. 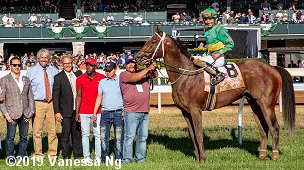 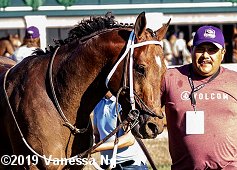 Left: Engage in the winner's circle. Winning trainer Steve Asmussen said, "We're very pleased with the outcome. It's great to see this horse dig in. Quality field, rush to the wire and he found enough. He's always been a quality horse. Belmont Futurity (G3) winner as a 2-year-old, fresh horse, very sound horse. Loved the opportunity for him. We felt good about our chances when we saw him over the race track here at Keeneland. This is a big win."

Right: Engage heads back to the barn after the race. Winning jockey Jose Ortiz said, "He's a very game horse. I know him very well and I appreciate the opportunity they gave me to ride him back. (The race unfolded) very good. I was expecting an honest pace, but they weren't going that fast so I was able to lay close. The last sixteenth, he felt some horses coming – he pins his ears back and keeps going." 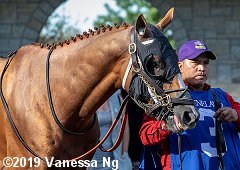 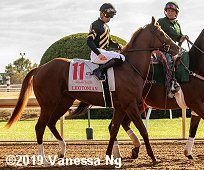 Left: Second place finisher Whitmore in the paddock. Trainer Ron Moquett said, "I think the (slightly slow) pace might have affected him a little. He has not run in a while and I was glad to get him back in action. If the race had been a little faster earlier, then (leaving the gate) that far back would not have affected him at all. Breeders' Cup is still a possibility."

Right: Third place finisher Lexitonian in the post parade. Jockey Adam Beschizza said, "I was (on) the underdog in the race, but it was his first time taking on elders and he showed his grit. That's the way he likes to do it. He's a solid horse. He's just probably getting to the end of his 3-year-old campaign now. Things are going to get harder for him but he showed his all. True heart there. He ran huge." 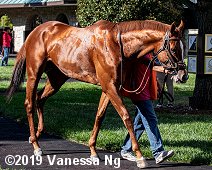 Left: Sixth place finisher and beaten favorite Promises Fulfilled in the paddock. Trainer Dale Romans said, "(Jockey) Luis (Saez) said he was switching leads a couple times. I don't know (what happened). We'll figure it out. He said he thought he was traveling good early and that he had a lot of horse. I don't know. We've got a Win and You're in (from the John Nerud). We'll just have to figure something out over the next 30 days. Everything is still on the table (between the Sprint and Dirt Mile)."

Right: Down the stretch in the Stoll Keenon Ogden Phoenix Stakes with Engage rallying in the center.