The feature race at Del Mar on Saturday was the $300,000 Bing Crosby Stakes (G1) for older horses sprinting 6 furlongs on the main track and is a Breeders' Cup Challenge "Win and You're In" qualifier for the Sprint. Conditions were excellent with clear skies and temperatures in the mid 70's, with the main track fast and the Jimmy Durante turf course firm. Recruiting Ready was sent off as the 8-5 favorite in the field of 7 off his close third in the True North (G2). In to challenge him included 9-2 second choice Cistron, second in the Triple Bend (G2) after winning the Kona Gold (G2), and 19-4 third choice Jalen Journey, second in the Smile Sprint (G3).

Jockey Victor Espinoza sent Cistron to the lead exiting the chute through fractions of 22.10 and 45.16 while pressed by 5-1 fourth choice Desert Law and stalked by Recruiting Ready. Turning for home, Cistron continued to lead through 5f in 57.31. Desert Law tried to close the gap late but Cistron held him off to win by 1/2 a length in 1:09.95. It ws another 2 1/4 lengths back to Jalen Journey third, while favorite Recruiting Ready tired late to finish 6th. 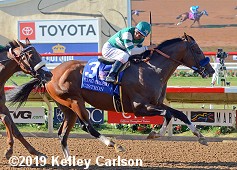 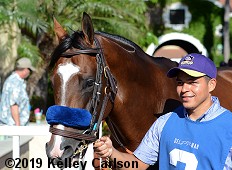 Left: Cistron in the winner's circle. Winning trainer John Sadler said, "The way we were drawn, we knew we'd have to go to the front. It looked like there was a lot of speed in the race, but we didn't really have a choice to change our style. Once he got away and got in the clear he gets energy from that. He had a super work over this track, a bullet, and he showed up for the big race today. We've got so many moveable parts (versatile horses) I'm not sure what's next, but if he runs again here it will be in the Pat O'Brien."

Right: Cistron in the paddock. Winning jockey Victor Espinoza said, "We were comfortable up there. He was running well on the lead. I wanted to save something for the stretch and I was able to. I didn't get a lot of pressure up front and that helped. At the finish I still had lots of horse. He's an amazing horse. I was thinking about that (getting injured a year ago) today. Life is interesting, isn't it? How things happen; how they unfold. One thing I learned early in my career, you don't give up. You don't ever give up. And when I win a race, I enjoy it so much. Each win is special." 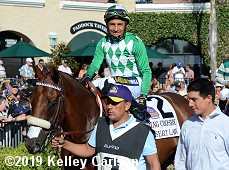 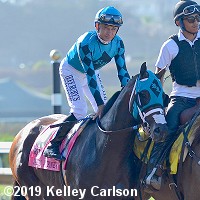 Left: Second place finisher Desert Law in the paddock. Jockey Rafael Bejarano said, "He ran a beautiful race. He tried hard. You know, they worked him quick the other day, close to this race (bullet :47 1/5 on July 22). Maybe too fast too close. I wish I would have worked him."

Right: Third place finisher Jalen Journey in the post parade. Jockey Mike Smith said, "He just got a little tired at the end. Right up until then, I thought I was on a winner." 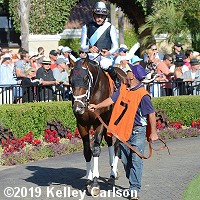 Sixth place finisher and beaten favorite Recruiting Ready in the paddock before the race. The Stanley Hough trainee has a record of 7 wins, 3 seconds, and 5 thirds in 22 starts, earning $652,636 for owner Sagamore Farm. 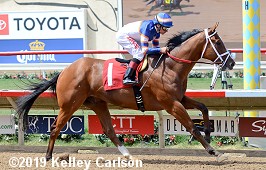 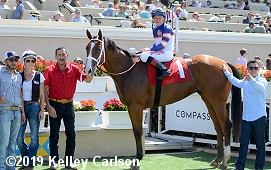 A field of 5 California-bred/sired 3-year-olds contested the $150,000 Real Good Deal Stakes over 7 furlongs on the main track. Jockey Joe Talamo sent 7-10 favorite Cruel Intention to lead through fractions of 21.91 and 44.62 while pressed by 2-1 second choice Lieutenant Dan and stalked by 13-2 Posterize. Entering the stretch, Cruel Intention continued to lead through 3/4 in 1:10.28 but Lieutenant Dan and jockey Drayden Van Dyke came through on the inside to win going away by 3 lengths over late-running 26-1 longest shot Oliver in 1:23.67. It was a neck back to Cruel Intention third.

Winning trainer Steve Miyadi said, "The turf to dirt (switch) was because that's the Golden State series; the cutback (in distance) meant that I didn't have to train him as hard and I'm always worried about his weight, so that was a blessing in disguise. We trained him lightly, had one good workout eight or nine days ago, and here we are. He'll come back in the fall for the Cary Grant." Jockey Drayden Van Dyke added, "We were going a little fast in the beginning, but he was comfortable. And good horses can do that. The key with him is to get him to switch leads properly. I was on him for his most recent work and we were working on that. Today he did it perfectly."