A full field of 14 older horses contested the $1 million Breeders' Cup Turf Sprint (G1) going about 6 1/2 furlongs on the downhill turf chute at Santa Anita. Eddie D Stakes (G3) winner Unbridled's Note was sent off as the 9-2 favorite over 11-2 second choice California Flag, winner of this race in 2009 and coming off a win in the San Simeon Handicap (G3), and 6-1 third choice Bridgetown, winner of both the Troy and the Woodford (G3).

14-1 Starspangledbanner was quickest away and opened a 1 1/2 length lead down the hill through fast fractions of 21.11 and 42.39 while stalked by 31-1- Chosen Miracle and 9-1 Reneesgotzip. After crossing the main track, Starspangledbanner continued to lead through 5/8 in 1:05.36 before tiring, as 7-1 Mizdirection, 10th early, charged on the far outside to win by 1/2 a length over favorite Unbridled's Note in 1:11.39. It was another 1 1/4 lenths back to Reneesgotzip third. 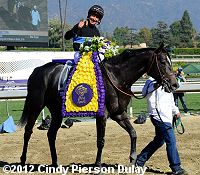 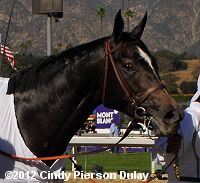 Left: Mizdirection heads to the winner's circle. Winning co-owner, sports talk show host Jim Rome said, "The great thing about this horse is she is so honest and so tough. And like everybody said in a race like that coming down that hill where it's a free for all you hope to get a good break, a good racing lock. But at the end of the day I had concerns as to whether or not she was good enough. She was so tough and honest. I wasn't concerned on who was on the other either side. We wanted to get her in and get her out clean. We're all in love with the horse. It's great to see her run like that and make up the ground she did, it feels great." Right: Mizdirection heads back to the barn after the race. Trainer Mike Puype said, "We had talked and Alex (Solis Jr., co-owner) pushed me a month ago, he said all the good colts out here in California were getting hurt and we need to do start thinking about this race and that's all I needed to get her in gear. She was wide.  She lost ground. She ran like a true champion to lose that much ground and still beat a field as talented as this" Jockey Mike Smith added, "She broke really well and then the race was on. She gathered herself up and hit the dirt (cross-over) running. I think that was a big key, a lot of times they hit the dirt and scramble, she got the dirt and she was in her best stride at the wire, to be honest, she could have went a mile today. 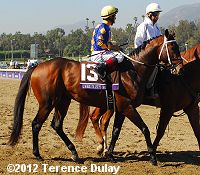 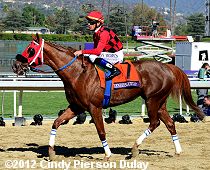 Left: Second place finisher and beaten favorite Unbridled's Note in the post parade. Jockey Corey Nakatani said, "The race set up just the way we thought it would.  I was able to get first run on a lot of the horse, but I couldn't catch the winner.  He ran a tremendous race.  He didn't deserve to lose. All we can ask for them is to do their best – and that's what he did."

Right: Third place finisher Reneezgotzip returns after the race. Jockey Garrett Gomez said, "She broke well, put me in a good spot, tracked well, crossed the dirt well. Peter (trainer Miller) jiggled the idea of trying her on the turf, and when I worked her a half-mile on the turf here a couple of weeks ago she lit up my face." 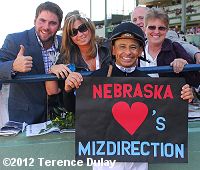 Mike Smith poses with some fans from Nebraska after the race. The same lady had two other signs for the day: Groupie Doll (winner of the Filly and Mare Sprint) and Mucho Macho Man (2nd in the Classic). Hope she bet the same as her signs!