The longest race on Breeders' Cup weekend is the $500,000 Breeders' Cup Marathon (G2), a 1 3/4 mile test around 3 turns of the Santa Anita Park oval. Jockey Club Gold Cup (G1) fourth place finisher Atigun was sent off as the 3-1 favorite in the field of 13, over 7-2 second choice Fame and Glory, fifth in the QIPCO Jockey Club Cup (G3) last out, and 6-1 Commander, winner of the Premier Handicap (G3) at Hastings Park. 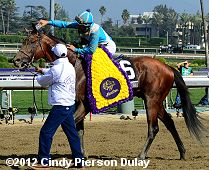 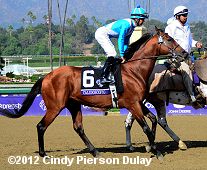 Left: Calidoscopio gets some water on his head as he parades after the race. Jockey Aaron Gryder, celebrating his first Breeders' Cup win, said, "After the first mile he started getting stronger as we went along and by the time we got to the 1/4 pole he was advancing so quickly I felt if he gave that same turn of foot that I had seen on the DVD he was going to be able to run 'em down, and I thank the connections. I don't speak any Spanish and they don't speak any English and it came together in a nice way and we have had a lot of laughs and I've had some great translators."

Right: Calidoscopio in the post parade. Translator John Fulton, speaking on behalf of trainer Guillermo Frankel, said, "To begin with, he started as a veterinarian and is known to be one of the best care taking trainers in our industry in Argentina. He always gives them the time they need and kept the horse sound by his knowledge as a veterinarian and in trying to prevent injuries coming up. If he needs time, he gives it, and he has allowed this horse to stay strong and mature and get better, he has been good for a long time he didn't have to get better and he says the main thing that makes him good is his heart." 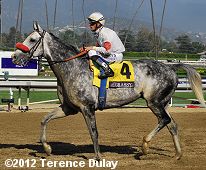 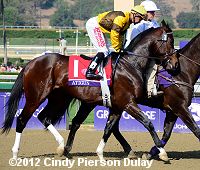 Left: Second place finisher Grassy returns after the race. Jockey Garrett Gomez said, “I rode him several times on the turf when he was with (trainer Christophe) Clement in New York. The question was would he handle the dirt. I thought he would get the 1 3/4 and get over the dirt OK, but didn’t know how he would handle the dirt coming back and hitting him in the face. He handled it fine and this gives him some new options."

Right: Third place finisher and beaten favorite Atigun in the post parade. Jockey Mike Smith said, “I was in good shape on the backside the second time around; I thought I was going to be doing well. My horse ran a big race, but (Calidoscopio and Grassy) got me on the outside, The winner was so far out I saw him, but had he been in a little closer, it would have given my a horse a little bit more fight.” Trainer Ken McPeek added, “He tried real hard. Mike said he hung in the last 1/8 mile.”