The first of two grass events on Friday was the $1 million Breeders' Cup Juvenile Fillies Turf (G1), for 2-year-old fillies going 1 mile on the turf at Santa Anita. Like all juvenile races at the 2012 Championships, all race-day medications are prohibited. Sky Lantern was sent off as the 5-2 favorite in the full field of 14, off her win in the Moyglare Stud (G1) in Ireland. In to challenge her included 7-2 second choice Spring Venture, winner of the Natalma (G2) and Mazarine (G3) at Woodbine, and 6-1 third choice Watsdachances, winner of the P.G. Johnson and Miss Grillo (G3). 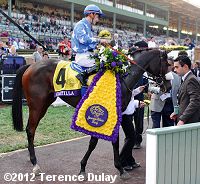 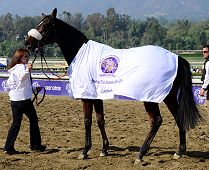 Left: Flotilla in the winner's circle. Thierry Delegue, representing owner Sheikh Mohammed Al Thani said, "I don't know if she would like the tight turns, but the tight turns help her to relax and we felt she might be better on fast ground. I wouldn't say it was a long term target. We were happy with our race in Longchamp, she was a little bit unlucky, but the way she won was quite impressive and she was keen on coming to America, so we decided we should have a try."

Right: Flotilla heads back to the barn in her winner's blanket. Jockey Christophe Lemaire said, "The first thing was to relax her may be in the middle of the field and she was still a little bit on the bridle because of the slow pace, but she was racing very well, so I was not worried in the last turn because I knew she would be able to react very well down the stretch." 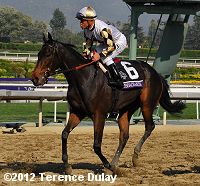 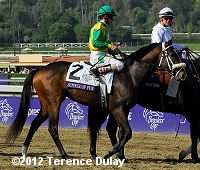 Left: Second place finisher Watsdachances returns after the race. Jockey Javier Castellano said, “We had a great trip. She ran really hard.  She was tracking behind the leaders, and when I asked her to go, she put in her run.  There are no excuses.  She was second-best today.  Sometimes that’s just the way it is.” Trainer Chad Brown added, “I thought she ran great. I thought Javier gave her a good ride and he got the running room he needed turning for home. She was second-best. I was real proud of the way she ran.”

Right: Third place finisher Summer of Fun in the post parade. Trainer George Weaver said, “I knew she was better than 40-1. She finished third in her last start at Keeneland and we knew we had to step our game up. I wasn’t surprised that she finished third and wouldn’t have been surprised if she won. She will continue to get better.” 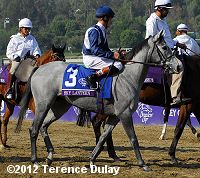 Eighth place finisher and beaten favorite Sky Lantern in the post parade. Jockey Richard Hughes said, “I had plenty of horse.  Just nowhere to go. Usually in these kind of races, something will open up, but today there was no hole at all.”