A field of just 9 older horses went to post in the $1 million Breeders' Cup Dirt Mile (G1), a 1 mile trip around one turn of the main track at Santa Anita Park. Emcee was sent off as the 5-2 favorite off his win in the Forego (G1) ar Saratoga. In to challenge him included 3-1 second choice Shackleford, second in the Kelso (G2) last out, and 9-2 third choice Jersey Town, winner of the Kelso after finishing third in the Forego. 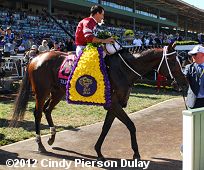 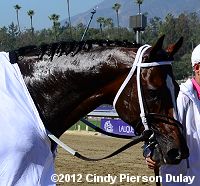 Left: Tapizar in the winner's circle. Owner-breeder Ron Winchell said, "The key was we shipped him out here, he worked over the surface a couple of times and he worked way better than he was going at Belmont and we thought it was definitely worth a shot at this point. This race we knew we were going to run differently because when he ran in the Breeders' Cup Mile last year, the plan was to restrain him and not let him have too much speed and that proved to be ineffective with his style of running, so the plan today was to let him be a free-running horse, to go out there and let him be on the lead or off the lead and hopefully have something left coming home."

Right: Tapizar heads back to the barn after the race. Jockey Corey Nakatani said, "This never gets old. Winning a race on Breeders' Cup day is special; it's special just to get the chance to compete. It's extremely gratifying. We had a good trip. He got away in good order. Last time (6th in the Kelso), he just didn't handle the track. I told Steve (Asmussen) to go on to the Breeders' Cup, and I'm glad he did." 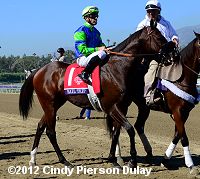 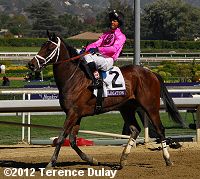 Left: Second place finisher Rail Trip in the post parade. Jockey Jose Valdivia Jr. said, "Considering the way this track has been playing for speed, I thought he ran a great race. When Shackleford missed the break, I think that changed the whole complexion of the race. When I got through at the head of the stretch, I had a lot of horse, but we were just second best today. It is a credit to Ron Ellis that he gets this horse back after two years and he still has his number."

Right: Third place finisher Delegation returns after the race. Trainer Mark Casse said, "I thought he ran great. Patrick said he was trying to get out, but he had a good trip." Jockey Patrick Husbands added, "I had so much horse and I was coming on the rail. I was begging for a little break. When I finally got it, it was too late. He showed up like a champion. He ran a big race." 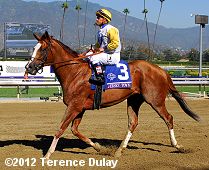 Sixth place finisher and beaten favorite Emcee returns after the race. Jockey Alan Garcia said, "He broke good and I saw that Shackleford stumbled out of the gate, so I said 'let me take a chance.' We fell into the lead and he gave me all he could. Just no luck today."