The $2 million Grey Goose Breeders' Cup Juvenile (G1) features 2-year-old colts and geldings going 1 1/16 miles on the main track, and often decides the early favorite for the next Kentucky Derby. Under the new Breeders' Cup rules, no race-day medications are permitted in the juvenile races. Shanghai Bobby, undefeated in 4 starts was sent off as the 6-5 favorite in the field of 9 off wns in the Hopeful (G2) and the Champagne (G1). In to challenge him included 5-2 second choice Power Broker, winner of the FrontRunner Stakes (G1), and 8-1 Title Contender, off a maiden win last out at Santa Anita. 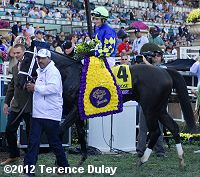 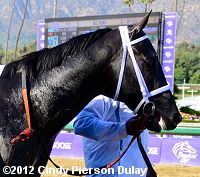 Left: Shanghai Bobby in the winner's circle. Trainer Todd Pletcher said, "It's great to have an undefeated 2-year-old and go all the way from April to November; it's pretty hard to do. It's a real feather in his cap. He's got everything you want. He's fast and he's courageous. He's handled everything we've thrown at him, from 4 1/2 furlongs to 1 1/16 miles. He just keeps coming. I was concerned about the fractions. That was our strategy, to be aggressive, the way the track was playing. We didn't want to get shuffled back."

Right: Shanghai Bobby heads back to the barn. 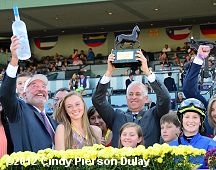 Jack Wolf founder of Starlight Racing, trainer Todd Pletcher, and jockey Rosie Napravnik celebrate at the trophy presentation. Napravnik said, "We were in a great spot. As a matter of fact, down the backside, I was having déjŕ vu of the Kentucky Oaks (win aboard Believe You Can) and being in that golden spot. He outran (Title Contender) way too early because once he gets to the lead, he gets a little bit lost. I was worried at that point, because he just came to a walk. I was hoping those horses would come up to him sooner than later. They did, and he kicked on again. He's a terrific horse." 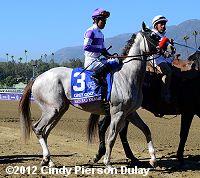 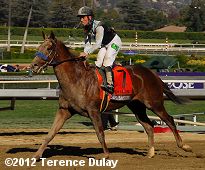 Left: Second place finisher He's Had Enough in the post parade. Trainer Doug O'Neill said, "To overcome all that trouble, he ran dynamite. Right to the end, I was still thinking he was going to get there. He got beat by a nice horse." Jockey Mario Gutierrez added, "He ran very good, but we did get shut off twice on each turn."

Right: Third place finisher Capo Bastone returns after the race. Trainer John Sadler said, "He ducked out a little on the first turn. We lost ground, and that may have made all the difference He got a little further back than the trip we thought we were going to get. But he ran a great race."