There were 9 races on Day 2 of the 2012 Breeders' Cup World Championships. Of these, one of the more highly anticipated was the $2 million Breeders' Cup Mile (G1) for older horses going 1 mile on the turf, despite the absence of European star miler Frankel. Wise Dan was sent off as the 9-5 favorite off a three race winning streak, including two Win and You're In races, the Woodbine Mile (G1) and the Shadwell Mile (G1). In to challenge him included 2-1 second choice Excelebration, winner of the QIPCO Queen Elizabeth II (G1) and the Prix Jacques le Marois (G1), and 11-2 third choice Moonlight Cloud, off his win in the Prix du Moulin de Longchamp (G1). 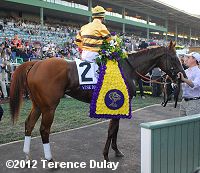 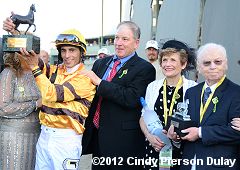 Left: Wise Dan in the winner's circle. Winning owner-breeder Morton Fink said, "You're in the business for forty years, and you know, you can do everything right and have the best of everything and then you get a bad trip and you lose. With this horse, this is crazy to say, it's almost impossible to do that to him. As soon as he sees daylight he's gone and nobody will beat him, nobody! Charlie and I both believe he is entitled to a rest and we haven't gone any farther than that. In this business it's one race at a time, no long-range plans. I'm not going to think about how he would do against Frankel. He's the best horse in the world. He's retired. We're never going to get a chance to run so no point of thinking about that." 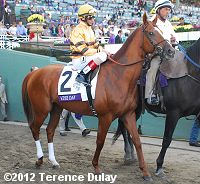 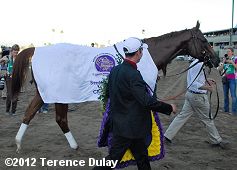 Left: Wise Dan heads out to the track before the race. Trainer Charles Lopresti said, "He is just a super horse, every time I work him, every time I do something with him, he amazes me and I've tried not to work him too often and too fast. At Saratoga, I realized how fast he was when we started to work him on the turf, some of you have seen him work there, so we don't put a lot of works into him in between races. Sometimes you will look at the workouts and maybe they look spotty and people will wonder what's wrong, but he's a phenomenal horse."

Right: Wise Dan returns to the barn in his winner's blanket 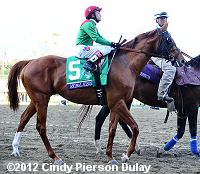 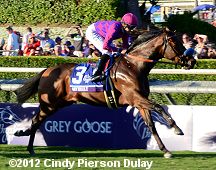 Left: Second place finisher Animal Kingdom in the post parade. Jockey Rafael Bejarano said, "They were going so fast early and I was stuck down inside. I had no choice. Then I had to go in and out of horses. When I finally got to ask him, he gave me a huge kick. I only wish I could have asked him earlier. (Wise Dan) got first jump on me. If it is the other way around, it might have been a different finish." Trainer Graham Motion added, "Seconds are very tough and I have some tough second-place beats in the Breeders' Cup.  I'm thrilled with the way he ran.  If he doesn't get steadied at the top of the stretch, I don't know.  What a great run and what a great horse.  He's a special horse."

Right: Third place finisher Obviously leads first time by. Jockey Joe Talamo said, "We figured to be on the lead and we had an easy lead.  I just wish that (Suggestive Boy) hadn't been out there.  He just put pressure on us.  I don't know if that cost us the race, but we did feel it. He stayed on well."