The $600,000 Mr. D. Stakes (G1) (formerly run as the Arlington Million) celebrated its 38th and final renewal on Saturday afternoon at Arlington International Racecourse near Chicago. The track is conducting its final meeting before being sold to developers by owner Churchill Downs Inc. Conditions were excellent at the historic suburban Chicago oval, with sunny skies and temperatures in the high 70's, with the turf rated good. After 2 scratches, a field of 8 older horses contested this 1 1/4 mile trip around two turns. Domestic Spending was sent off as the 2-5 favorite, coming here off a 4 race win streak including the Old Forester Turf Classic (G1) and Manhattan (G1). In to challenge him included 3-1 second choice Armory, 4th in the SkyBet York Stakes (G2) after finishing 3rd in the Prince of Wales's Stakes (G1), and 9-1 third choice Zulu Alpha, 5th in the Arlington Stakes (G3), the main local prep for this event. 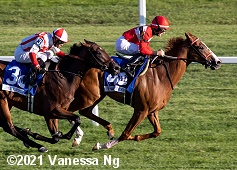 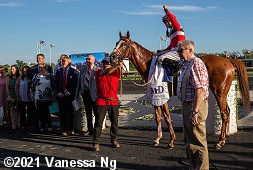 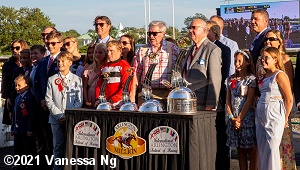 Left: Two Emmys in the winner's circle. Winning owner Randy Wolfe said, "We didn't even know if we were going to run this horse till Tuesday. He'd never run that far (1 1/4 miles) under that weight. I asked (trainer Hugh Robertson) what he thought and he said, 'Let's give him a chance.'"

Right: The trophy presentation for the Mr. D. Stakes. Winning trainer Hugh Robertson said, "I have run graded stakes, but never a Grade 1. It was a really nice win. He got a great ride and he got the slow pace. When he turned for home he was going to hang on for part of the way. I didn't know if he could out kick Domestic Spending, but he did. The horse never gets any respect. I was very happy with ride he got today. All this time, I (finally) win the Million, and it's only a $600,000 race." This was the locally-based Robertson's first and only starter in the historic race. 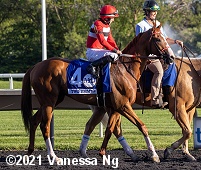 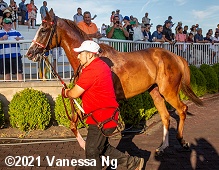 Left: Two Emmys in the post parade. Winning jockey James Graham said, "I knew we were going slow. I thought maybe they were going to jump on me early, but I guess they all bottled themselves up by trying to ride too smart of a race. If they give him any leeway at all, where he can take a deep breath and leave him alone. He was a big price and they said, ‘Well, he's going to come back,' but he doesn't come back. He didn't come back today!"

Right: Two Emmys heads back to the barn. Graham added, "This is home. It is very emotional right now. The Million is the set-piece of the races here in Chicago. It is a shame that is going to be stepped away." Asked which race he would like to win, between the Kentucky Derby and the Arlington Million, he said, "This one. The Arlington Million was my answer." 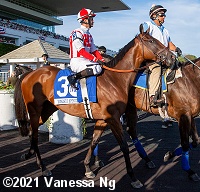 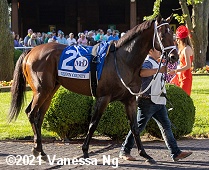 Left: Second place finisher Domestic Spending heads out to the track before the race. Jockey Flavien Prat said, "I had a good trip, but it was a slow pace, Even if I got myself closer it was really hard to make ground on the winner. Around the turn I made a move, but they just ran away from me." 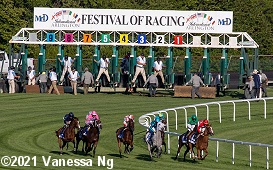 Shortly after the start and first time by in the Mr. D. Stakes with Two Emmys on the lead. 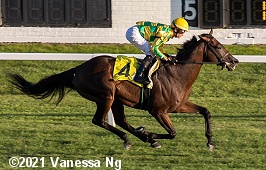 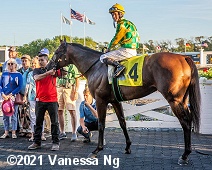 On to the Beverly D. won by Santa Barbara
On to the Bruce D. Stakes won by Point Me By