The distaff counterpart to the Mr. D. Stakes is the $400,000 Beverly D Stakes (G1). After 2 scratches a short field of 5 older fillies and mares contested this 1 3/16 mile trip over the Arlington turf on Saturday. Santa Barbara was sent off as the even-money choice off her Belmont Oaks Invitational (G1) win after finishing a close second in the Pretty Polly (G1) in Ireland. In to challenge her included 11-10 second choice Mean Mary, winner of the Gallorette (G3) and New York Stakes (G2), and 11-2 third choice Lemista, 8th in the Diana (G1) after finishing a close second in the Beaugay (G3).

Jockey Luis Saez sent Mean Mary to the front first time by and she set fractions of 24.57, 49.34, and 1:13.33 while pressed by 14-1 Naval Laughter and stalked by Santa Barbara. Turning for home, jockey Ryan Moore moved Santa Barbara out 2 wide for room and she swept to the front through 1 mile in 1:37.14. Kept to task by Moore, Santa Barbara drew off to win by 3 lengths over Mean Mary in 1:54.55. It was a neck back to Lemista third. 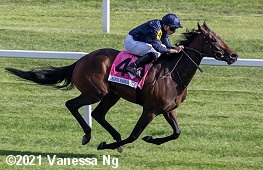 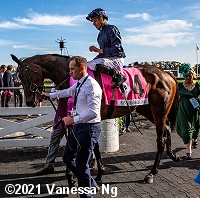 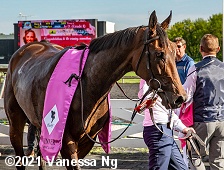 Left: Santa Barbara heads to the winner's circle. Winning jockey Ryan Moore said, "She was always a filly I had a high opinion of. She was very comfortable. Very straightforward today. She took me there too easy, really. She was just coasting the last furlong."

Right: Santa Barbara heads back to the barn after the race. 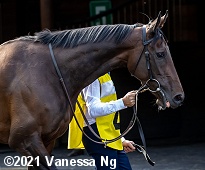 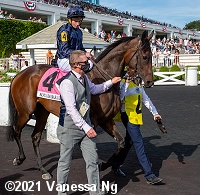 Left: Santa Barbara in the paddock before the race. Moore added, "She won the Belmont race very comfortably. The family has a lot of speed, and it suits them coming to flat, tight, fast-turn tracks."

Right: Santa Barbara heads out for the post parade. Trainer Aidan O'Brien said earlier in the week that she will run in the Breeders' Cup Filly and Mare Turf at Del Mar. 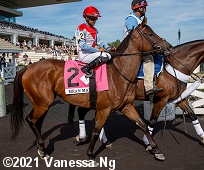 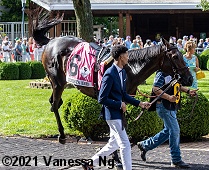 Left: Second place finisher Mean Mary heads out to the track before the race. Trainer Graham Motion said, "she hit the gate pretty hard, and it took a little of the sting out of her. It's not her being bad. She just anticipates the gate. She really banged it, and that just takes some of the wind out of her sails. But that's her game – she jumps the gate. Very frustrating."

Right: Third place finisher Lemista gets frisky in the walking ring. Jockey Flavien Prat said, "I was traveling super and was in a good position. When they picked it up [around the far turn] she asked me to get a breather, I think, and just couldn't really keep up with them. But she regrouped and finished well."

The entire field pass the stands first time by with Mean Mary in the lead and Santa Barbara mid-pack. 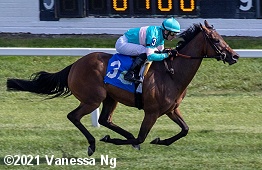 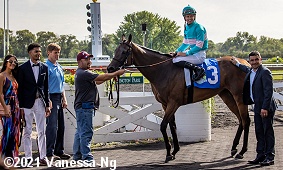 The first of the four graded stakes on the card was the $100,000 Pucker Up Stakes (G3) for three-year-old fillies going 1 1/8 miles on the inner turf. Boiling Springs Stakes winner Shantisara was sent off as the 9-5 favorite in the field of 7 over 2-1 second choice Oyster Box, 4th in the Regret (G3), and 5-2 third choice Flown, third in the Regret before finishing a close second in the Hatoof Stakes.

Jockey James Graham sent 21-1 Spritz to the lead first time by through fractions of 24.83, 49.52, and 1:13.43 while pressed by Oyster Box and stalked by 47-1 Time for Glory and 17-2 Shesa Mystery. Turning for home Shantisara, 5th early, came through between horses to gain the lead through 1 mile in 1:40.89. Kept to task by Flavien Prat, Shantisara drew off late to win by 3 lengths over Oyster Box in 1:51.91. It was another 2 lengths back to late-running Flown third. 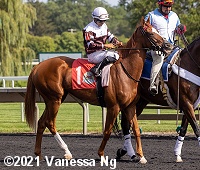 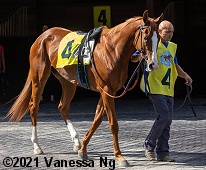 Right: Third place finisher Flown in the paddock before the race. The Brendan Walsh trainee improved her record to 1 win, 4 seconds, and 2 thirds in 8 starts, earning $211,670 for owner Heider Family Stables. 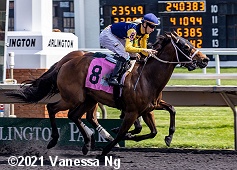 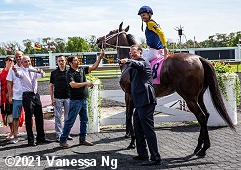 The $75,000 Addison Cammack Memorial Stakes featured a field of 8 Illinois-bred older horses sprinting 6 furlongs on Polytrack. 7-2 second choice Locamotor set the pace of 22.95 and 46.25 while pressed by 6-5 favorite Richiesinthehouse and stalked by 11-2 What's Up Dude. Turning for home jockey Jareth Loverberry moved Richiesinthehouse to challenge through 5f in 57.96. The pair dueled to the line with Richiesinthehouse prevailing by a neck in 1:10.41. It was another 2 lengths back to 5-1 third choice Devileye third.