The 42nd annual Sovereign Awards, saluting outstanding achievement in Canadian Thoroughbred racing and breeding in 2016, were handed out at a ceremony on Thursday evening at the historic Palais Royale Ballroom in west Toronto facing Lake Ontario. Unlike their U.S. equivalent, the Eclipse Awards, horses must have started at least 3 times in Canada to qualify (2 for juveniles). Winning connections are presented with a trophy which is a replica of English racing great St. Simon, with Woodbine television personality and G98.7 sportscaster Jason Portuondo serving as master of ceremonies. The awards night also served to kick off the year-long celebration of 250 years of horse racing in Canada, the sport (both thoroughbred and harness) predating Confederation by a century. Continuing the positive theme from last year, speeches about politics or industry issues were completely omitted.

The star of the evening was Caren, who was first named Champion Three-Year-Old Filly and then at the end of the evening, was named Canada's Horse of the Year. Campaigned by Robert Marzilli and trained by Mike De Paulo, the daughter of Society's Chairman was second in the Selene (G3) and third in the Woodbine Oaks before reeling off wins in the Bison City, Wonder Where, Ontario Colleen (G3) and Carotene Stakes. She closed out the year with a disappointing 11th place finish in the Mrs. Revere (G2) at Churchill Downs. De Paulo said, “She’s a special filly. Lucky Rob here, it was his second horse. He’s been a great new addition to our team.” Along with the traditional St. Simon statue, Marzilli's family was presented with the Horse of the Year trophy, new this year, which is a round crystal disc with the image of St. Simon etched in the center and her name etched across the bottom.

Perennial winner Mark Casse, who was not in attendance, captured his 6th straight Outstanding Trainer award, off a season where his runners won 97 of 460 starts (17 stakes wins) with $5.6 million in earnings. He was also represented by champion Two-Year-Old Male King and His Court, winner of the Coronation Futurity and Display Stakes, champion Two-Year-Old Filly Victory to Victory, winner of the Natalma (G1), and champion Turf Female Lexie Lou, winner of the Nassau (G2) and Dance Smartly (G2). His daughter Camille accepted all 4 awards on behalf of her father and the respective owners of each horse.

Another multiple winner on the night was owner-breeder Ivan Dalos' Tall Oaks Farm, best known as the breeder of 1997 Belmont Stakes winner Victory Gallop. This year his homebred Amis Gizmo was named champion Three-Year-Old Male off wins in the Plate Trial, Prince of Wales Stakes, and Ontario Derby (G3), and unraced homebred Galloping Ami was named outstanding Broodmare, producer of fellow 2016 champion Amis Gizmo, as well as graded stakes winner Amis Flatter. In addition, he is the breeder of Conquest Enforcer, who was named champion Turf Male off wins in the Mathis Brothers Mile (G2), Charlie Barley, Allied Forces, and Queenston Stakes. Dalos said, “All the horses that I race are all bred by me. I don’t buy horses, everything’s bred. I race them, I sell them, but they’re all bred by me. I’ve worked almost 40 years on my recipe, and I can’t give it away. It’s just too valuable, and I’ve worked too hard for it. Cooking recipes, they don’t like to give away, and breeding recipes, I don’t want to give away.”

Conquest Stables won the Outstanding Owner award off 28 wins in 119 starts with purse earnings of almost $2 million. However, the win was bittersweet in that the stable, owned by Ernie Semersky and Dory Newell of Chicago, dispersed its horses in the fall of 2016. In addition, the stable's Conquest Enforcer won the award for champion Turf Male off wins in the Mathis Brothers Mile (G2) and the Charlie Barley Stakes. Conquest Enforcer now races for new owners Loooch Racing Stables, Imaginary Stables, and Raquel Ritchie and trainer Phil D'Amato based in California.

Frank Stronach's Adena Springs operation took two awards. First, Adena Springs was named Outstanding Breeder for the 11th time, with 47 winners fron 82 starters led by Woodward (G1) and Brooklyn (G2) winner Shaman Ghost. This was the closest race in the balloting, as Stronach "nosed out" Ivan Dalos' Tall Oaks Farm by a single point. He accepted the trophy on stage with his son Andy. Stronach returned to the stage immediately after, when he was presented with the E.P. Taylor Award of Merit for his longtime involvement and commitment to Canadian Thoroughbred racing. He also invited daughter Belinda on stage to announce the $16 million purse for the 2018 Pegasus World Cup, as if it was a surprise despite the news already released a week earlier.

Kayla Pizarro was named outstanding Apprentice Jockey, off a season where she led all apprentices in Canada with 40 wins in 279 mounts, including a stakes win aboard About a Girl in the Miss Royal Gold Stakes. She and older brother Tyler (winner in 2007) are the only brother-sister combination to win the award.

Eurico Rosa da Silva had his best season yet in 2016, leading all riders in Canada with 202 wins in 796 mounts including 21 stakes victories, giving him the nod as Outstanding Jockey for the third time. He won the Woodbine Oaks aboard Neshama and also won the Dominion Day (G3) aboard Melmich, the Mazarine (G3) on Gale Force, and the Highlander (G2) aboard Passion for Action.

In the media categories, Cody Gregory's "Morning Workout" was the Outstanding Photograph, Beverley Smith's "Laurie Silvera's Woodbine Paradise" was given the Outstanding Writing award, and Woodbine Entertainment Group's broadcast of the Woodbine Mile, which aired on TSN, won Outstanding Audio/Visual and Broadcast honors.

Vote totals for the top four finalists for all the awards along with photos for all of the equine winners are below. Votes were cast for the top three choices, 4 points for first, 2 for second, and 1 for third, in each category by voters and the top point getters were named the finalists. The voters are individuals serving in industry positions such as senior racing officials, racing journalists and commentators, as well as provincial representatives of the Breeding and Horsemen's organizations. The judging for the 2016 media categories was performed by the Journalism Professors at Humber College, School of Media Studies & Information Technology, in Toronto, Ontario. 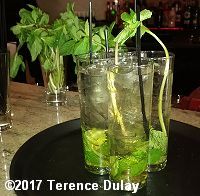 There was lots of candy for the people to take home and unlimited mint juleps too.