The $250,000 Coronation Futurity at Woodbine is the premier race for Canadian-foaled 2-year-olds, and usually influences voting for the Sovereign Awards in the 2-year-old male category as well as determines the early favorite for next year's Queen's Plate. A field of nine went to post in this 1 1/8 mile Tapeta main track test, under clear skies with temperatures in the low 50's. King and His Court was sent off as the 5-2 favorite, winless since breaking his maiden in July and third in his last 3 starts including the Colin Stakes in September and the Grey (G3) in October. In to challenge him included 3-1 second choice Woodbridge, who broke his maiden last time out in his 4th try after finishing third in the Vandal Stakes, and 7-2 third choice Tidal Dancer, still a maiden but second in the Cup and Saucer Stakes on turf last out. 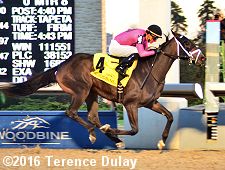 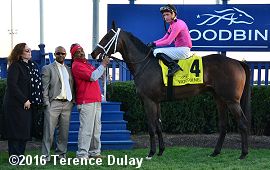 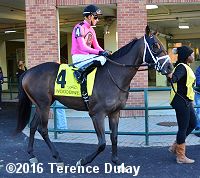 Left: King and His Court in the winner's circle. Kathryn Sullivan, assistant to winning trainer Mark Casse said, "This horse came to us in great order from Mr. Patykewich and we just put on the tack and he ran away. Mr. Barber and Mr. Wachtel know racehorses. They saw a good horse and they made a good buy."

Right: King and His Court returns after the race. Winning jockey Gary Boulanger said, "I had a great trip. Patrick (Husbands aboard State of Honor) and Alan Garcia (Tidal Dancer) were in front of me and I was just tracking them. When Alan made a move in the turn I followed him. He fanned out and I didn't want to split horses and when the rail opened up, I asked him and he was push button. I hit the button and he was gone." 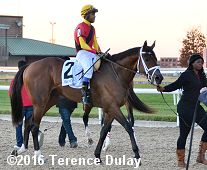 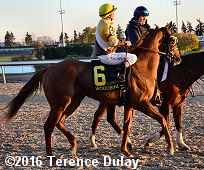 Left: Second place finisher State of Honor returns after the race. The 5-1 fourth choice set the pace under Patrick Husbands but could not hold off the winner. The Mark Casse trainee improved his record to 1 win, 1 second, and 1 third in 6 starts, earning $83,748 for owners-breeders Manfred and Penny Conrad.

Right: Third place finisher and beaten favorite Escondera in the post parade. The 8-1 fifth choice sat 8th 6 lengths off the pace under Eurico Rosa da Silva, then rallied to get third beaten 4 lengths. The Roger Attfield trainee improved his record to 1 win, 1 second, and 1 third in 4 starts, earning $60,417 for owner-breeder Robert G. Harvey. 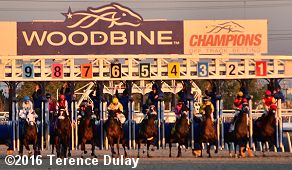