A week before some of the best turf horses in North America meet up over Woodbine Mile weekend, main track sprinters were featured at Woodbine on Sunday afternoon. The feature was the $125,000 Colin Stakes for two-year-olds going 6 furlongs on Tapeta. After an unusually hot summer, conditions were excellent at the west Toronto oval, with partly cloudy skies and temperatures in the low 70's. Honor River was sent off as the 2-1 favorite in the field of 7 off his maiden win at second asking on August 14. In to challenge him included 5-2 second choice Signature Spring, a debut winner on August 20, and 5-1 third choice Junket, winner of his debut then finished second in the Victoria Stakes last out.

Jockey Luis Contreras sent 8-1 Arlen's Prospect to the lead exiting the chute and he set fractions of 22.24 and 45.50 while pressed by 11-2 fourth choice Uncle B and stalked by Junket. Entering the stretch, Arlen's Prospect tired allowing Junket to gain the front through 5/8 in 58.16. However, Signature Spring, 5th early under jockey Rafael Hernandez, came out 4 wide for room and rallied to win by 1 1/4 lengths in 1:10.48. It was another 3/4 length back to 30-1 longest shot King and His Court third. Favorite Honor River failed to rally and finished 6th. 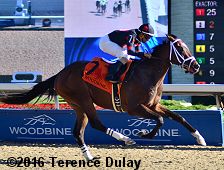 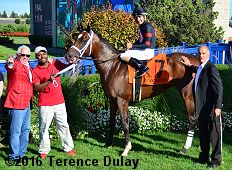 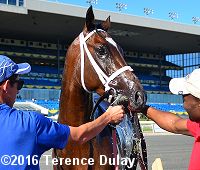 Left: Signature Spring in the winner's circle. Winning trainer Sid Attard said, "(Jockey Rafael Hernandez) is so smart; he knows where to put them. (Signature Spring) showed me something good, the last couple of works. He really finished strong."

Right: Signature Spring gets hosed off after the race. 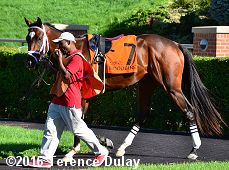 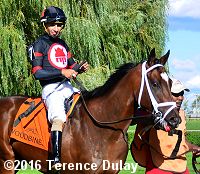 Left: Signature Spring in the paddock before the race. He improved his record to 2 wins in 2 starts, earning $89,955 for owner Norseman Racing Stable.

Right: Signature Spring heads out for the post parade. 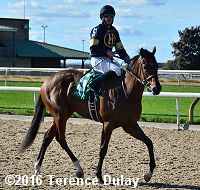 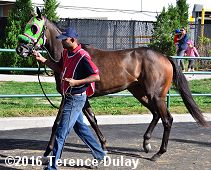 Left: Second place finisher Junket returns after the race. The 4-1 second choice stalked the pace third under Jesse Campbell, gained the lead in the stretch but failed to hold off the winner. The Nick Gonzalez trainee improved his record to 1 win and 2 seconds in 3 starts, earning $53,706 for owners Horse'n Around Racing Stable and Martha Gonzalez.

Right: Third place finisher King and His Court heads into the paddock before the race. The 30-1 longest shot was last 7 lengths off the pace under Gerry Olguin then rallied 5 wide to get third beaten 2 lengths. Heimproved his record to 1 win, 0 seconds, and 3 thirds in 6 starts, earning $49,600 for owner-trainer Alex Patykewich. 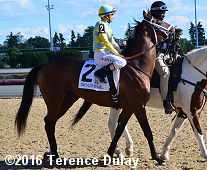 Fifth place finisher and beaten favorite Honor River in the post parade. The 2-1 choice settled in 4th 2 lengths off the pace under Eurico Da Silva but failed to rally finishing 6th beaten 4 1/4 lengths. The Mark Casse trainee has a record of 1 win, 0 seconds, and 1 third in 3 starts, earning $36,848 for owner John Oxley. 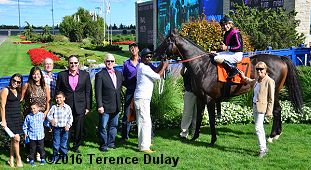 An hour before the Colin, a field of 7 older horses contested the $100,000 Ontario Jockey Club Stakes, also at 6 furlongs on the Tapeta. Stacked Deck was sent off as the 9-5 favorite off his 5th place finish in the Connaught Cup (G2). In to challenge him included 2-1 second choice Puntrooskie, winner of the Bold Venture (G3) last out, and 4-1 third choice and 2015 Canadian champion sprinter Calgary Cat, 5th in the Troy Stakes at Saratoga after finishing third in the Bold Venture. Jockey Rafael Hernandez sent Stacked Deck to the lead exiting the chute and he set fractions of 22.53 and 44.99 while pressed by Puntrooskie and stalked by 15-2 Sweet Grass Creek. Entering the stretch, the threesome continued to hold those positions through 5/8 in 56.76. Kept to task by Hernandez, Stacked Deck edged clear to win by 1 1/2 lengths over Puntrooskie in 1:08.79, just 0.63 seconds off the track record. It was another 2 1/2 lengths back to Sweet Grass Creek third.

Winning trainer Barb Minshall said, "I love him to death, but he's a difficult, difficult horse. But he's been really good in the last month and I'm really, really happy with him." Owner-breeder Bruce Lunsford added, "He's been a great horse for me. I love coming up here. We've had pretty good luck in the last four years up here. I plan to keep coming and I hope I get a few more like this one." Jockey Rafael Hernandez added, "Everything worked good. We got a good post; he broke perfect.  I just let him run in the stretch."