The world's richest race meeting highlighted by the $12 million Dubai World Cup (G1), will be conducted at Meydan Racecourse in Dubai on Saturday. On Wednesday afternoon the post positions were drawn for the main event, which features some of the best older horses in the world going 2000 meters (about 1 1/4 miles), two turns of the 1 1/8 mile dirt track. Due to the COVID-19 pandemic, last year's race night was cancelled so as a result, this year's edition is billed as the 25th anniversary running. However, the event will be run behind closed doors with only essential media, officials, and horsemen in attendance, and another effect of the pandemic is that every race except the main event will be run for reduced purses (see below). There was a moment of silence at the start of the event to honour Sheikh Hamdan bin Rashid al Maktoum who died today at the age of 75. Sheikh Hamdan is the younger brother of Sheikh Mohammed and owned Shadwell Stable as well as serving as the deputy ruler of Dubai.

Post positions for the big race and the undercard races are available below. An online racecard is available from Dubai Racing Club where you can click on each horse's name to get a form summary.

Mystic Guide is the 5-2 favorite (at OddsChecker at time of writing) from post 6 in the field of 14. After winning the Jim Dandy (G1) last year he finished 2nd in the Jockey Club Gold Cup (G1), then came back to win the Razorback Handicap (G3) at Oaklawn. Regular rider Luis Saez gets the call for trainer Mike Stidham. Jesus' Team is the 6-1 second choice. The Jose D'Angelo trainee finished third in the Preakness (G1) then was second in the Breeders' Cup Dirt Mile (G1). He won the Claiming Crown Jewel then was second in the Pegasus World Cup (G1) last out at Gulfstream. Joel Rosario will be in the irons from post 9. Military Law is the 13-2 third choice out of the 5 hole. After winning the Al Maktoum Challenge Round 1 (G2) at Meydan he shipped to Riyadh to finish 6th in the Saudi Cup. Antonio Fresu gets the call for trainer Musabbeh Al Mheiri.

As has been the tradition at the Dubai World Cup, the horse names are drawn randomly and then the drawn horse's representative comes up to draw the post. This year, an Emirates flight attendant randomly chooses a horse statue, with a horse's name hidden on the opposite side. The horse's representative (usually the trainer but could be owner or jockey) then selects one of the miniature trophies, which has the post number hidden. The undercard races were drawn using the standard "double blind" system.

Trainer Salem Bin Ghadayer has two horses entered, Capezzano from post 7 and Hypothetical from the 2 hole. He said, "We couldn't be happier. The draw for both horses is very good and I'm very confident. Hypothetical has class and has shown improvement race by race and he will run a huge race." Jesus' Team drew the 9 for trainer Jose D'Angelo, who said, "When I saw post position 9 I was happy because it's in the middle. He doesn't need to make an aggressive move at the beginning. I like the number 9, and I am very sure [about my horse]. It was a relief. In the Breeders' Cup Mile he had to start from gate 11. He can move fast to find a good spot. So, I like this post position."

Note that the saddlecloth numbers do not correpond to posts, but are instead in order of handicap weights (as is the practice in most of the world). The World Cup goes off at 12:40PM (all times Eastern), while the first race is the $1 million Dubai Kahayla Classic for Purebred Arabians at 7:45AM. The table to the right has all the post times.

Since betting is illegal in the UAE, the international wagering hub is located in South Africa and their rules apply. Since Dubai won't do odds, the morning line odds shown below are from OddsChecker.com at time of writing.

The races will be shown live on TVG in the U.S. and HPI-TV in Canada, as well as at racetracks and simulcast sites. In addition, NBC Sports Network will show the World Cup starting at 12:30pm ET. The locally produced show on Dubai Racing Channel can be viewed live here starting at 7:00am ET. 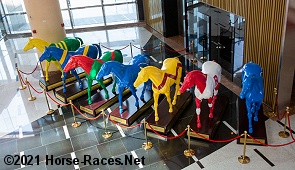 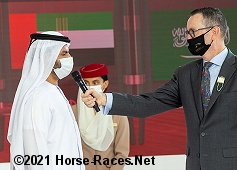 Left: Horse statues in the Meydan lobby painted in the colors of some past Dubai World Cup winners.

Right: Gifts of Gold drew the far outside post 14 and will have Christophe Soumillon aboard. Trainer Saeed bin Suroor said, "He can jump well from the stalls, we'll make the best of what we've got. The horse is doing good though; I'm happy with the way he's training since he came back from Saudi. I'm looking forward to seeing him run well." 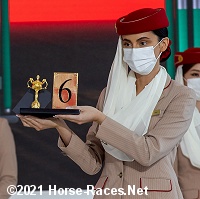 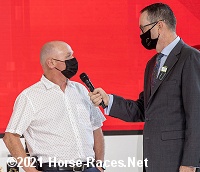 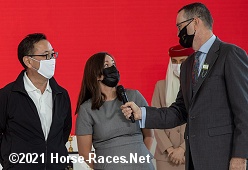 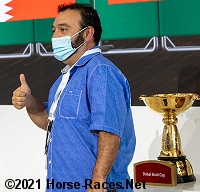 Left: Chuwa Wizard will break from post 3 under jockey Keita Tosaki. Trainer Ryuji Okubo said, "It is a good draw. I didn't want a wide gate because it is close to the first turn."

Right: Sleepy Eyes Todd drew post 10 for jockey Alexis Moreno. Trainer Miguel Angel Silva said, "I am very, very happy. We wanted to be on the outside, 10 is great. I think we're going to be very close to the speed. I am very pleased with where we are. I think we're the one to beat. We can make the lead if we need to, he has won on the lead before. Jockeys have to make a split-second decision,you never know how it's going to unfold." 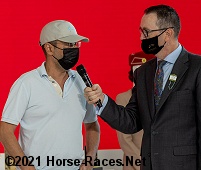 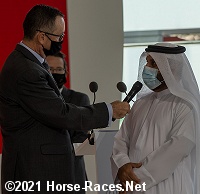 Left: Salute the Soldier will break from post 11. Trainer Fawzi Nass said, "Obviously we would have preferred a lower draw but it is what it is and, in Adrie de Vries, we have a top jockey who will ride his race as he sees fit."

Right: Trainer Musabbeh Al Mheiri drew post 5 for Military Law. He said, "I am very happy with the draw. This is perfect and I just couldn’t have asked for a better position for him to start. If he jumps out well and Antonio Fresu can get him into a good position just off the pace then we have every reason to believe he will be in a good position to contest the finish. He will work for the last time on Thursday and we will have him ready for race day." 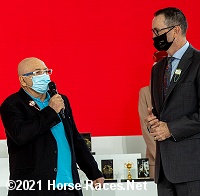 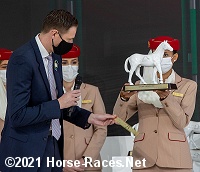 Left: Title Ready's owner Charles Fipke addresses the audience after drawing post 4. Trainer Dallas Stewart said later, "We’d prefer a little more outside, but we are happy with it. Not too bad." New jockey Ryan Moore will be in the irons on Saturday.

Right: One of the horse statues used during the draw process.