The world's richest race meeting and the world's richest horse race, the $10 million Dubai World Cup, will be conducted at Meydan Racecourse in Dubai on Saturday. On Wednesday evening the post positions were drawn for the Dubai World Cup (G1), which features some of the best older horses in the world going 2000 meters (about 1 1/4 miles) on the main Tapeta synthetic track. Post positions for the big race and the undercard races are available below. An online racecard is available from Dubai Racing Club where you can click on each horse's name to get a form summary. AmWest Entertainment has free past performances here. A Form Guide which has past performances for the entire card is also available from Emirates Racing Authority.

This is the very first Dubai World Cup (in 19 runnings) lacking a U.S.-trained entrant. Coolmore representative Ruler of the World is the lukewarm 9-2 favorite, drawing post 12 in the full field of 16, unraced since finishing a close third in the QIPCO Champion Stakes (G1) at Ascot in October. Joseph O'Brien gets the call for trainer and father Aidan. In to challenge him included 5-1 second choice Ron the Greek who drew the outside stall 16. The 2013 Jockey Club Gold Cup (G1) winner was purchased by King Abdullah bin Abdulaziz Sons in December, and won a 1 1/8 mile allowance race at King Abdulaziz Racecourse last out for new trainer Nicholas Bachalard. Jose Lezcano will be in for the ride. Hong Kong representative Military Attack is the 8-1 third choice out of post 8. He comes here off a win in the Hong Kong Gold Cup (G1). Jockey Joao Moreira gets the call on Saturday night for trainer John Moore.

Harry Herbert, racing advisor to Al Shaqab Racing, new partners in Ruler of the World said, "Ideally we would have liked to have been two or three stalls lower, but Joseph O'Brien is a master at getting a good position. He will work it with his father Aidan." Nicholas Bachalard, trainer of Ron the Greek said, "The horse has been training very well. Not much we can do about (the draw). The others don't have to worry now – we've drawn it. There's not much to say. Lezcano has his work cut out for him. It's a long way around (from the outside). We'll look at it, talk about it and figure out a strategy."

Along with the four Group 1 events, there are 2 Group 2 events and a Group 3 race carded. The $2 million UAE Derby (G2) features northern hemisphere 3-year-olds and southern hemisphere 4-year-olds going 1900 meters (1 3/16 miles) on the main Tapeta, worth 100 points to the winner under the Road to the Kentucky Derby. Giovanni Boldini represents Coolmore off his second place finish in the Breeders' Cup Juvenile Turf (G1). The night starts off with the $500,000 Dubai Kahayla Classic (G1) for purebred Arabians, followed by the $1 million Godolphin Mile (G2) at 1600 meters (1 mile) on Tapeta and the $1 million Dubai Gold Cup (G3) at 3200 meters (2 miles) on turf.

The saddlecloth numbers correspond to post positions barring any late scratches. The World Cup goes off at 2:05PM (all times Eastern), while the first race available for American bettors, the $1 million Godolphin Mile (G2) off at 9:10AM. The table to the right has all the post times for the races being simulcast to the US. The first live race at Meydan is the $250,000 Dubai Kahayla Classic for purebred Arabians (post time 8:35AM) and is not available for wagering in the US.

Since betting is illegal in the UAE, the international wagering hub is located in South Africa and their rules apply. Win, exacta, trifecta, superfecta, daily double (Sheema Classic and World Cup), and rolling Pick 3 wagering are the same as the American versions, however, there is no show pool but bets to place pay to third place, like a show bet normally would. Since Dubai won't do odds, the morning line odds shown below are from Equibase's past performance file. 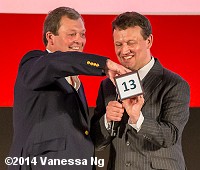 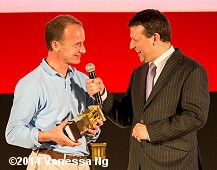 Left: Trainer William Haggas draws post 13 for British runner Mukhadram in the Dubai World Cup. This year, to ensure a "double blind" draw, an Emirates Airline flight attendant would select an Airbus A380 model which had the name of a horse on the bottom. A connection for that horse would come up on stage and select a trophy which would have the post position number on the bottom. Haggas said, "I'd have preferred a low one. We don't have a clue (about the surface) and we won't show it to him until Saturday night. The post will make the jockey's task more difficult, but there's nothing you can do about the draw or the weather – so you just get on with it. It's unfortunate."

Right: Trainer Richard Gibson drew post 4 for Hong Kong based Akeed Mofeed. Gibson said, “All the bad draws had already been taken. The pressure was gone. I’m thrilled with barrier 4. Statistically it’s the best draw in the race which I didn’t know so we can’t be disappointed with that.” 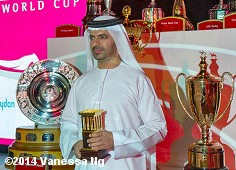 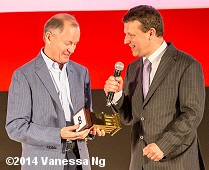 Left: Trainer Saeed bin Suroor in front of the trophies. He drew post 1 for Prince Bishop and post 6 for African Story, both based in Dubai. He said, "(Prince Bishop) has a good turn of foot and the plan will be to take a good early position. Physically the horse is very much better than last year and we are hoping for a good run. Kieren Fallon gets on very well with him. It's simple for (African Story). He can be there, sitting handy in the race and use his speed at the end."

Right: Trainer John Moore drew post 8 for Hong Kong based Military Attack. He said, "Very pleased. Exactly where I wanted to be. He's tactically versatile, so being drawn in the middle gives us options and we can watch the race form around us. There's a lot of Hong Kong interest in the race with two horses in the Dubai World Cup – the world's greatest race. We're looking forward to the challenge."