The final Grade 1 race of the New York racing season is the $300,000 Cigar Mile Handicap (G1), featuring older horses going 1 mile around 1 turn of the Aqueduct main track. Only 6 (with 5 betting interests) went to post before a crowd of 4,512 on a clear but windy Saturday afternoon with temperatures in the low 50's. The 2-horse Godolphin Racing entry of Pyro and Vineyard Haven was sent off as the 6-5 favorite. Forego winner Pyro comes to Aqueduct off a last place effort in the Breeders' Cup Dirt Mile at Santa Anita, while stablemate Vineyard Haven won his last 2 starts, both in Grade 1 company, the King's Bishop at Saratoga and then the DeFrancis Memorial Dash at Laurel. In to challenge them included 2-1 second choice Bribon, exiting a 5th place effort in the Woodbine Mile after winning the Met Mile and Westchester Handicap, and 3-1 third choice Kodiak Kowboy, winner of the Vosburgh Stakes last out after finishing second in the Forego to Pyro.

Vineyard Haven and 7-1 Driven by Success battled for the lead exiting the chute and down the long backstretch through quick fractions of 23.69 and 46.80 over the fast surface, with Kodiak Kowboy and Bribon contesting third about 2 1/2 lengths off the leaders. Entering the stretch, Driven by Success tired and faded to last, allowing Vineyard Haven to continue to lead through 3/4 in 1:11.54. Bribon put in his bid at the 3/16 pole and gained a short lead in mid-stretch, but Kodiak Kowboy came out wide for the drive, passing both Bribon and Vineyard Haven at the 70-yard pole to win by 3/4 length in 1:35.57. Bribon held off co-favorite Vineyard Haven late to earn second place money. 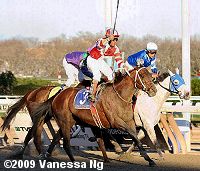 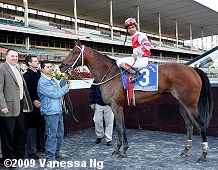 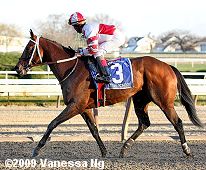 Right: Kodiak Kowboy returns after the race. Tom Ludt, president of winning co-owner Vinery Stables said, "That's three Grade 1's this year. We couldn't be happier. He was a little closer to the pace than normal, but he was just sitting there so comfortably. Shaun rode a great race. He's ridden him well as a 2-year-old, and as a 4-year-old. This horse has been so good for us. Now, he's going home to be a dad." 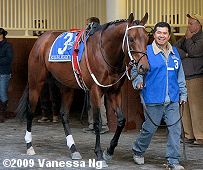 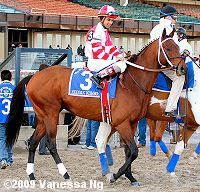 Left: Kodiak Kowboy in the paddock before the race.

Right: Kodiak Kowboy heads out for the post parade. His jockey Shaun Bridgmohan said, "He is such a cool horse. I had such a great trip. I was just very patient with him, and when I asked him, he responded like the professional he's always been. What a nice horse." 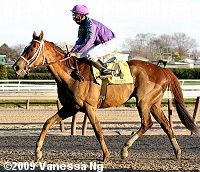 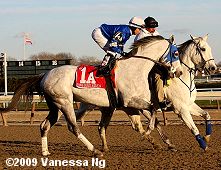 Left: Second place finisher Bribon returns after the race. His trainer Robert Ribaudo said, "He ran great. We were a little concerned because the track seemed to be putting up some slow times, but the track didn't seem to bother him. I certainly won't run him early in Gulfstream. It depends how he comes back. But we need him around for next year." His jockey Rajiv Maragh added, "He ran hard all the way to the wire, and it's unfortunate he didn't win. He ran too good to lose, but there can only be one winner."

Right: Third place finisher and beaten favorite Vineyard Haven in the post parade. His trainer Saeed bin Suroor said, "I like (Vineyard Haven) to be there in front, that's the plan. But the horse is not the same as we saw in his last two races. I talked to Alan and he said he was struggling and when he went to ask him, there was nothing there. I was disappointed with the result." His jockey Alan Garcia added, "My horse just didn't have it like he did last time."

The co-feature on Cigar Mile day was the $300,000 Gazelle Stakes (G1) for three-year-old fillies going 1 1/8 miles on the main track. Last year's champion juvenile filly Stardom Bound was sent off as the lukewarm 2-1 favorite in the field of 8, unraced since finishing third in the Ashland at Keeneland in April. In to challenge her included 9-4 second choice Unrivaled Belle, winner of three straight including the Real Prize last out, and 3-1 third choice Flashing, winner of the Test at Saratoga but third in the Presque Isle Masters and a well-beaten 12th in the Raven Run at Keeneland.

Jockey Richard Migliore sent Flashing to the front soon after the start, setting a pace of 24.24, 48.73, and 1:12.90 with Unrivaled Belle pressing her on the outside around the clubhouse turn and down the backstretch. Favorite Stardom Bound was off slowly and raced back in 6th early. On the far turn, Flashing began to pull away from the field, opening up a 3 length lead at the top of the lane through 1 mile in 1:37.75. Unrivaled Belle couldn't stay with her but was the best of the rest, as Flashing cruised under the line 4 1/4 lengths in front, winning from gate to wire in 1:50.94 over the fast track. It was another 2 1/2 lengths back from Unrivaled Belle to 11-1 Bon Jovi Girl third, while favorite Stardom Bound failed to put in a significant rally and finished a disappointing 5th. 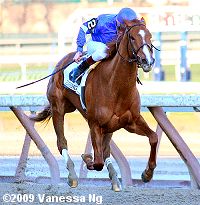 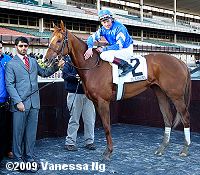 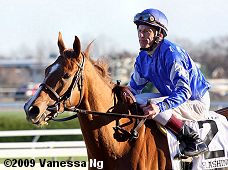 Right: Flashing returns after the race. Rick Mettee, assistant to winning trainer Saeed bin Suroor said, "The race really set up like Richard and Saeed and I thought it would. Making the front with Kent sitting on her flank a little bit, that's the way we thought it would transpire. When they put up the 48 and change, I thought she'd be either first or second after that. When she was able to shake away from that other filly it was great. It was the first time she's run 9 furlongs and maybe that's what she's wanted all along. Saeed was right not wanting to send her out to California. It was the right thing to do to keep her and keep her fresh. She rewarded us today and validated that Grade 1 win up at Saratoga (The Test) and showed it was no fluke." 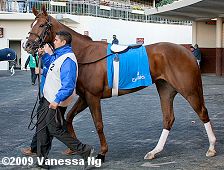 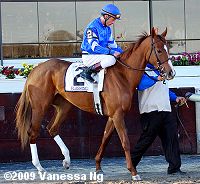 Left: Flashing in the paddock before the race.

Right: Flashing heads out for the post parade. Her jockey Richard Migliore said, "When she gets comfortable and get in a rhythm, she seems like she can run forever. I know everybody was a little concerned that she might go too quick, but she's really settled so well for me in the mornings. As long as you don't get into a fight with her, she kind of tucks herself up and goes on like a little deer. I knew at the 3/8 pole she was going to be very tough. The two times I rode her on conventional dirt I won Grade 1's on her, so obviously I love her." 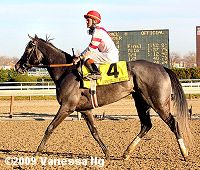 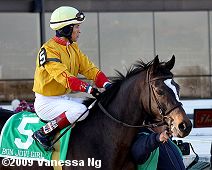 Left: Second place finisher Unrivaled Belle returns after the race. The 9-4 second choice pressed the pace from outside for 3/4 mile under jockey Kent Desormeaux but could not challenge the winner, finishing second beaten 4 1/4 lengths. The Bill Mott trained daughter of Unbridled's Song improved her record to 3 wins and 2 seconds in 5 starts, earning $160,270 for owners and breeders Peter Vegso and Gary Seidler.

Right: Third place finisher Bon Jovi Girl heads out for the post parade. The 11-1 shot was strong out 4 wide on the clubhouse turn then settled in fourth under new jockey Edgar Prado, closed the gap late to finish third beaten 6 3/4 lengths. The daughter of Malibu Moon improved her record to 5 wins, 3 seconds, and 3 thirds in 15 starts, earning $512,443 for owner-trainer Tim Ritchey. 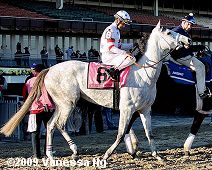 Also n the card were the Remsen and Demoiselle Stakes.