The $400,000 Vosburgh Stakes (G1) originally drew a short field of five older horses to sprint 6 furlongs, but after Peace Chant scratched out, just four made it to the starting gate in this Breeders' Cup Sprint prep. Fabulous Strike, winner of the True North in June and then the Alfred G. Vanderbilt in August, was sent off as the 3-5 favorite. In to challenge him included 5-2 second choice Munnings, exiting two straight third place finishes in the Haskell and the King's Bishop, and 9-2 third choice Kodiak Kowboy, a close second in the Forego last out after finishing third in the Vanderbilt. Vanderbilt runner-up Go Go Shoot completed the field as the 7-1 fourth choice.

Go Go Shoot was hustled to the front along the rail by new jockey Rajiv Maragh and he set a quick pace of 22.33 and 45.38 through the rain while being stalked to his outside by Fabulous Strike the whole way. Entering the stretch, Go Go Shoot tired allowing Fabulous Strike to open up a 2 length advantage in mid stretch through 5 furlongs in 57.45. Kodiak Kowboy, who sat back in fourth early but saved ground on the turn, came through between tiring horses in the final furlong to catch Fabulous Strike in the final strides for the 1/2 length victory in 1:10.08 over the sloppy track. It was another 3 1/2 lengths back to Munnings third, and 8 more to pacesetter Go Go Shoot last. 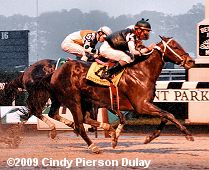 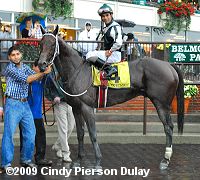 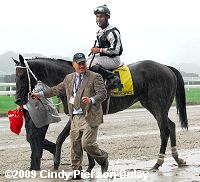 Right: Scott Blasi, assistant to trainer Steve Asmussen, with Kodiak Kowboy after the race. Blasi said, "It set up great for him. There was plenty of speed up front. He's been such a top horse his whole career." 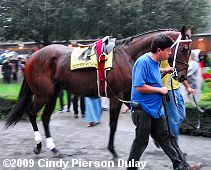 Kodiak Kowboy in the paddock before the race. His jockey Shaun Bridgmohan said, "I was on him when he won the Saratoga Special. He was a pro even back then. When he was transferred to Steve Asmussen's barn, I was excited because I knew I had a shot at getting back on him. Today, when I hit him left-handed, he really dug in gamely." 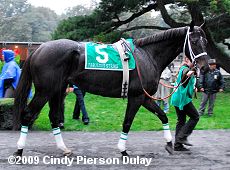 Second place finisher Fabulous Strike in the paddock. His trainer Todd Beattie said, "We're disappointed with the way he broke through the gate. I thought we were home free until Kodiak Cowboy caught him. Kodiak Cowboy is a tough customer. We have been battling with him for quite a long time. It was obvious he ran well today. You cannot knock my horse's effort. He made a good, solid effort. I knew he handled the off going. I was surprised they finished in 1:10. I will have to talk to the owner about the Breeders' Cup." His jockey Ramon Dominguez added, "Tough beat, unfortunately it didn't work out our way today. We had an ideal trip. I sat right off (Go Go Shoot) in front and made the lead with ease when I wanted, I just couldn't hold off the winner." 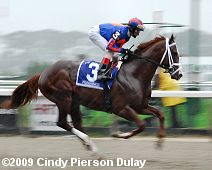 Third place finisher Munnings runs off in the post parade. The 5-2 second choice stalked the pace in third on the outside early under regular rider John Velazquez, stayed wide into the stretch but could not improve position late finishing third beaten 4 lengths. The Todd Pletcher-trained son of Speightstown improved his record to 3 wins, 2 seconds, and 4 thirds in 10 starts with earnings of $617,240.