As the heavy rain continued, the stakes action moved to the now soft turf for the $600,000 Flower Bowl Invitational (G1), a 1 1/4 mile inner turf test for older fillies and mares looking for a trip to the Breeders' Cup Filly and Mare Turf. Beverly D Stakes winner Dynaforce was sent off as the 2-1 favorite in the field of 7, over 5-2 second choice Moneycantbuymelove, third in the Nassau Stakes at Goodwood and making her first American start. 3-1 Pure Clan, third in the Beverly D after winning the Modesty, completed the top three on the toteboard.

14-1 Leamington was sent to the front by jockey Edgar Prado and she dueled for the lead with 10-1 Criticism through fractions of 26.91, 53.81, and 1:20.43 over the soft course. Favorite Dynaforce sat just behind the leaders in third. Entering the stretch, Leamington continued to lead through a mile in a slow 1:46.63 but she soon tired, allowing Criticism to open up a 1 1/2 length lead in mid stretch. Pure Clan came out four wide into the stretch for the drive and closed with a rush to pass Criticism in the final 1/16 to win going away by 2 3/4 lengths in 2:12.43. It was another 1 1/4 lengths back to 27-1 longest shot Queen of Hearts third, while favorite Dynaforce faded late to finish a well-beaten sixth. 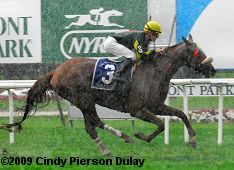 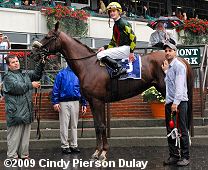 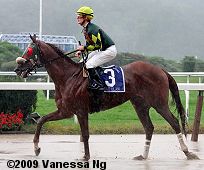 Left: Pure Clan in the winner's circle. Her trainer Robert Holthus said, "She ran a great race. I'm glad it's over. She showed more speed today than normal. She was in the race all the way. Julien had confidence. It's always good to get Grade 1's." 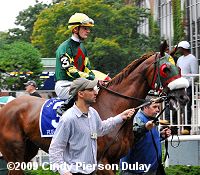 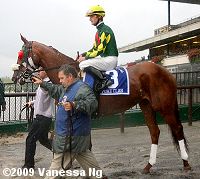 Right: Pure Clan heads out to the track before the race. Her jockey Julien Leparoux said, "She ran well today. We wanted her behind the pace so she would make a big run at the end. The turf course was really soft and she had to work hard at it in the stretch. Still, she got the job done." 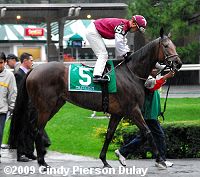 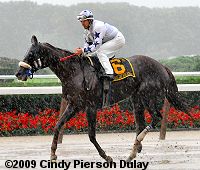 Left: Second place finisher Criticism in the paddock before the race. Her trainer Tom Albertrani said, "We were pleased with her. She came back to her previous races and found her best stride. We were really happy with the way she had been coming into this race since she was training so well. Today, she fired her shot. She is definitely better going longer. We are considering bringing her to the Breeders' Cup Filly and Mare Turf." Her jockey Javier Castellano added, "I'm very satisfied with the way she ran. She was stalking, just like we wanted. Unfortunately, she was second best, but I'm very happy."

Right: Third place finisher Queen of Hearts returns after the race. The 27-1 longest shot settled in midpack fourth early under regular rider Jose Espinoza, accelerated to the front to open a clear lead at the 1/8 pole but was unable to hold off the winner. The James Jerkens-trained daughter of Thunder Gulch improved her record to 2 wins, 1 second, and 3 thirds in 7 starts with earnings of $157,062. 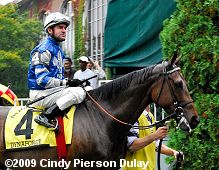 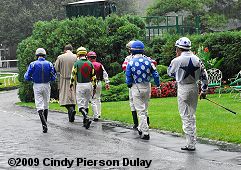 Left: Sixth place finisher and beaten favorite Dynaforce heads out of the paddock before the race. Last year's winner and the 2-1 favorite stalked the pace in third early under jockey Kent Desormeaux, made a mild move at the 1/4 pole but tired late to finish 6th beaten 20 3/4 lengths. The Bill Mott-trained mare has a record of 5 wins, 3 seconds, and 3 thirds in 16 starts with earning $1,086,772.

Right: The jockeys head into the paddock before the race in the pouring rain. The rain did not start until during the post parade for the Beldame, and total of nearly two inches of rain fell during the afternoon. The track rapidly declined from fast dirt and good turf before the Beldame to sloppy and soft afterwards.