The $600,000 Joe Hirsch Turf Classic Invitational (G1) is a major prep for the Breeders' Cup Turf. A field of 6 older horses (down from the originally drawn 9) went to post for this 1 1/2 mile trip over the soft Widener Turf Course, with Gio Ponti sent off as the 4-5 choice, exiting four straight wins, all in Grade 1 company, including the Arlington Million last out. In to challenge him included 5-2 second choice Grand Couturier, winner of the Bowling Green Handicap in his last start, and 6-1 third choice Musketier, a distant 9th in the Sword Dancer at Saratoga after finishing second to Gio Ponti in the Man O'War.

Jockey Robby Albarado sent 44-1 longest shot Interpatation to the front and he set very slow fractions of 26.01, 54.22, 1:22.20, and 1:48.79 over the very soft going through heavy rain, while 9-1 Al Khali sat second, in turn 3 lengths ahead of the rest of the field led by Musketier. Jockey Ramon Dominguez kept favorite Gio Ponti just off the hedge in fourth most of the way. Entering the stretch after 1 1/4 miles in 2:14.59, Dominguez sent Gio Ponti to challenge pacesetter Interpatation. The pair hooked up at the 1/8 pole with Gio Ponti poking a head in front, but Interpatation, aided by the very slow pace, had something in reserve, turning away the heavy favorite and surging ahead to a 1 3/4 length upset in 2:41.22. It was another 1 3/4 lengths back to late-running 7-1 Telling third. Telling was disqualified and placed fourth for interference through the stretch, moving Grand Couturier up to third place money. 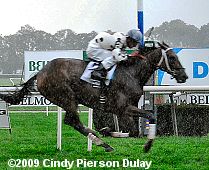 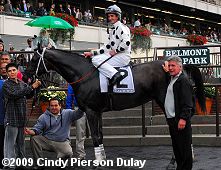 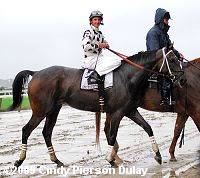 Left: Interpatation in the winner's circle with trainer Robert Barbara at his hip. Barbara said, "It was great! I just loved the way he looked going down the backside. In front of me, over here, he was just galloping on the lead and Robby just said he was having fun doing it. I was waiting for him one day to pick his head up and do it right. He did it right, on the perfect day. This horse made $700,000 the hard way, and now he's over a million in one day! I don't know what's next for him."

Right: Interpatation circles after the race. 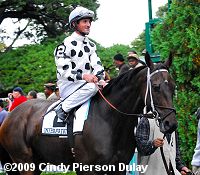 Left: Interpatation heads out of the paddock before the race. His jockey Robby Albarado said, "I had never ridden him before. Bobby said in the paddock, he's a stayer. He said a mile and a half is his distance, he ran his best race here last year, when he was second. I had the intention of being forwardly placed, and I ended up on the lead, galloping, in a canter. At every point, I had plenty of horse. When Gio Ponti ran up to me, I thought, 'Gee, maybe I can get second.' But he didn't get away from me, and my horse hit his stride." 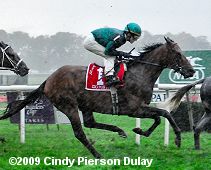 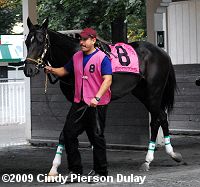 Left: Second place finisher and beaten favorite Gio Ponti goes by the first time shortly after the start. His trainer Christophe Clement said, "Second best in that one, but I thought he ran a very good race, he really tried. The idea is to go from there to the Breeders' Cup, use the race and move on." His jockey Ramon Dominguez added, "He handled the going well. He just got a little tired at the end."

Right: Third place finisher Grand Couturier in the paddock before the race. The 5-2 second choice trailed the field for the first 1 1/4 miles under regular rider Alan Garcia, gained on the turn but was steadied when bumped by Telling, finishing fourth beaten 4 lengths but moved up to third via disqualification. The Robert Ribaudo-trained horse improved his record to 8 wins, 0 seconds, and 6 thirds in 23 starts, earning $1,411,200 for owner Marc Keller.