The feature this weekend at Saratoga Race Course is the $500,000 Sword Dancer Invitational (G1), with a classy field of 10 older horses going 1 1/2 miles around 3 turns of the inner turf course. A crowd of 29,287 was on hand on a sunny Saturday afternoon with temperatures in the mid 80's. Defending champion Grand Couturier was sent off as the 3-1 favorite despite being winless since the Joe Hirsch Turf Classic last September, coming into this race off two straight fifth place finishes in the Monmouth Stakes and the Man O'War Handicap. In to challenge him included 4-1 second choice Americain, making his first start in the United States for new trainer Todd Pletcher after winning the Prix Vicomtesse Vigier at Longchamp last out, and 9-2 third choice Quijano, third in the Man O'War last out after winning the Gran Premio di Milano in Italy.

7-1 Lauro battled on the front end with 6-1 Musketier and Americain through fast fractions of 23.48, 46.80, and 1:11.13 over the firm turf course, while favorite Grand Couturier was unhurried at the back of the field first time past the stands and around the clubhouse turn. Down the backstretch the second time, the pacesetters began to slow down, as Lauro got the mile in 1:36.02 before giving way to Musketier on the far turn. Musketier led the field at the top of the lane through 1 1/4 miles in 2:01.06, but the fast pace had taken its toll has he tired badly through the stretch to finish ninth. 33-1 longest shot Telling, who had raced in midpack 6th for the first 9 furlongs saving ground around all three turns, came out four wide into the lane and passed tiring horses, opening up a 1 1/2 length lead in mid-stretch. 12-1 Better Talk Now, who was 8th early, put in a strong rally of his own but had too much ground to make up, as Telling cruised under the line 2 lengths in front in 2:25.43. It was another length back to 15-1 Brass Hat third. Favorite Quijano rated just off the pace in fourth early, moved up to challenge entering the stretch but tired through the lane to finish a disappointing 6th. 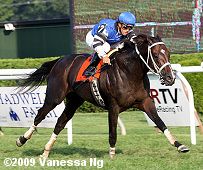 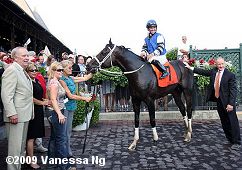 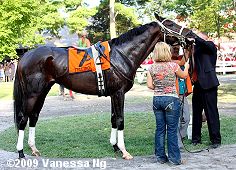 Left: Telling in the winner's circle with trainer Steve Hobby at his hip. Hobby said, "The owner picked it out. We (entered) a small stake (at Arlington Park) and we scratched to run in this. I figured it was the time to try now. For me, it's a great thrill. This is my first time in Saratoga. He was training so well and he really moves up in the mile and a half. We figured if he can't do it now, he'll never do it."

Right: Telling gets saddled in the paddock before the race. 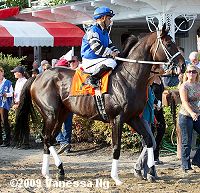 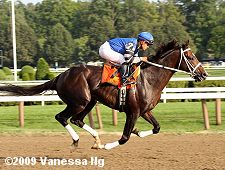 Left: Telling heads out on the track before the race.

Right: Telling runs off in the post parade. His jockey Javier Castellano said, "I give a lot of credit to my agent (Matt Muzikar), he picked the mount. I didn't know anything about him. The last race (Arlington Handicap), he finished fifth and he ran huge. He gave a big run to the jockey the last time, Fernando Jara, I learned a lot from that trip. Today was perfect. He broke sharp and I covered up all the way and tried to wait for one kick. I knew the two best horses in the race always come from behind. I just wanted to make the right move to get the job done. I had the perfect trip; I saved all the ground in the race. I squeezed in between the two horses and when I asked him he kicked in, and opened by two. He finished very good, a lot of power, strong. I'm very surprised at the way he ran a mile and a half and didn't get tired. I had to pull him up on the backside with the other horses. He gave me a good run, I'm very happy." 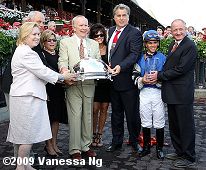 Trophy presentation for the Sword Dancer with owner Alex Lieblong in the center holding the big silver trophy. Lieblong said, "We knew were in tough. We didn't think we were over our heads. I thought coming up here with the jockey colony you have, it wasn't going to be a problem (getting a rider). It's fun having a horse like this, but it's hard to find mile and a half races. Steve (Hobby) does such a wonderful job with the horses." 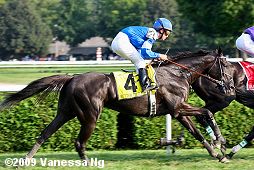 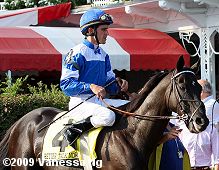 Left: Second place finisher Better Talk Now towards the back of the pack as they pass by for the first time. His trainer Graham Motion sad, "I thought we had a really good shot to get there. He had to come a little wide, but I thought he ran a huge race. It's tough to get beat by a 33-1 shot. He's still right there. I think [the fast pace] helped us. I think that was good for us. He made a good run. I'm thrilled, but I would have loved to win it. He ran a big race."

Right: Better Talk Now heads out for the post parade. His jockey Ramon Dominguez said, "The field was coming back to us. Coming for home, we were going by horses. I thought we were going to get up there, but that other horse kept going. (Better Talk Now) is still a pro. We were just second-best today." 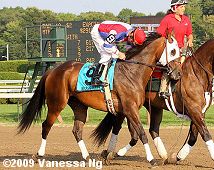 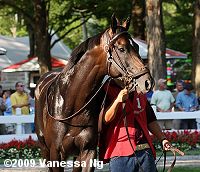 Left: Third place finisher Brass Hat in the post parade. His trainer William "Buff" Bradley said, "I am very pleased. He ran big. He came a little wide. I am happy for the winner; the trainer is a good friend of mine. He got a little scraped up on his back right hind. This horse is very special to us; he's our family's horse." His jockey Calvin Borel added, "He went a little fast up front, but he finished. He ran well. No excuse."

Right: Fifth place finisher and beaten favorite Grand Couturier in the paddock before the race. His trainer Bobby Ribaudo said, "Alan gave him every opportunity. At the top of the stretch I started getting excited. He was beaten a head and a neck for third, so it was hardly a disgrace. It was tremendous being in the position to try for a third straight victory in this race. It was great. Surprisingly, I was kind of relaxed. We'll see how he comes out of this; if he's fine there's no reason we wouldn't look at a race like the Turf Classic." His jockey Alan Garcia added, "He was in good position, the pace was good, everything was good. He just didn't have it at the end."