The $500,000 Man o'War Stakes (G1), a longtime fixture of the Belmont Park fall meeting, was moved to the spring meet last year. This 1 3/8 mile inner turf race was made famous in 1973 when it was used by owner Penny Chenery and trainer Lucien Laurin as the first start on the turf for Triple Crown winner Secretariat. A field of 9 went to post on Saturday afternoon before a crowd of 6,735, with clear skies and temperatures in the high 70's. As expected, Gio Ponti, winner of two straight Grade 1 events, the Frank Kilroe Mile at Santa Anita and the Manhattan Handicap at Belmont, was sent off as the 2-1 favorite. In to challenge the son of Tale of the Cat included 7-2 second choice and California invader Midships, winner of three straight including the Charlie Whittingham last out, and 4-1 third choice Dancing Forever, third in last year's Breeders' Cup Turf and then third in an allowance in his first start of 2009.

26-1 shot Musketier took over the lead from Midships on the clubhouse turn and the pair battled on the pace for the first mile through slow fractions of 25.23, 49.99, 1:13.50, and 1:37.02 over the firm turf course, with 7-1 Marsh Side and 10-1 Quijano stalking them third and fourth respectively. Jockey Ramon Dominguez kept the favored Gio Ponti back in 6th early and well off the rail away from traffic. Entering the stretch, Musketier quickened, getting 1 1/4 miles in 2:00.85 as Midships faded from contention, but Gio Ponti entered the lane 5 wide and was gaining with every stride. Gio Ponti easily passed Musketier at the 1/16 pole and won going away by 1 3/4 lengths in 2:12.56. It was another 1/2 length back from Musketier to Quijano third. 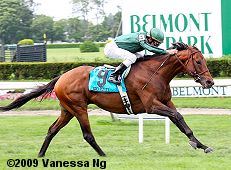 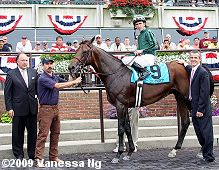 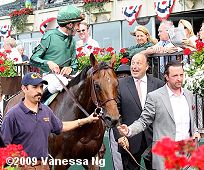 Left: Gio Ponti in the winner's circle with trainer Christophe Clement on the left. Clement said, "You know what, it's nice when they're that good. This is his third Grade 1 in a row, it just confirms that at the moment, I'm afraid, he's got to be the leader of the turf division here. He's just a very nice [horse]. He did not have the best trip, being wide . He was widest of all going in to the first turn, but Ramon gave him a great ride, he did not panic and he still had enough to finish and finished very well. That's the great thing about good horses, they overcome a few things."

Right: Gio Ponti takes his walk down Victory Lane led by Shane Ryan, the President of Castleton Lyons which owns him, and a smiling trainer Christophe Clement. 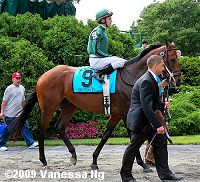 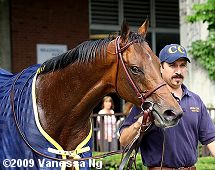 Left: Gio Ponti heads out of the paddock before the race. His jockey Ramon Dominguez said, "I was very concerned about the position I had. I was very happy with the fact that I was close, knowing that they were going very so slow and having my horse so relaxed. I was not happy about the fact that for one thing, I was very wide and also I was in the clear, which is not really ideal for these turf horses, but he was always relaxed and he proved that he's a runner. I was very impressed and very pleased with the way he finished."

Right: Gio Ponti heads back to the barns after the race. The son of Tale of the Cat out of the Alydar dam Chipeta Springs improved his record to 8 wins, 2 seconds, and 0 thirds in 13 starts, earning $1,545,800 for owner Castleton Lyons Farm. Trainer Christophe Clement said he would go next in the Arlington Million (G1) at Arlington Park on August 8th. 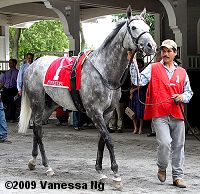 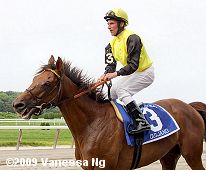 Left: Second place finisher Musketier in the paddock before the race. The 26-1 shot set the pace under jockey Jono Jones taking the ground-saving path the whole way, but was no match for the winner, continuing on gamely to hold second by 1/2 a length but beaten 1 3/4 length. The Roger Attfield trainee improved his record to 6 wins, 5 seconds, and 3 thirds in 31 starts, earning $492,430 for owner Johanna Louise Glen-Teven.

Right: Third place finisher Quijano returns after the race. The 10-1 shot stalked the pace in fourth under regular rider Andrasch Starke, saved ground around the far turn, drifted 4 wide into the stretch, and finished well to pass the tiring Midships at the 3/16 pole to get third place money, beaten 2 1/4 lengths at the line. The Peter Schiergen trainee improved his record to 14 wins, 4 seconds, and 2 thirds in 28 starts, earning $2,330,095 for owner Andreas Jacobs. 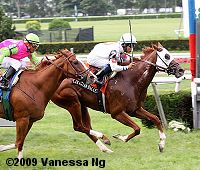 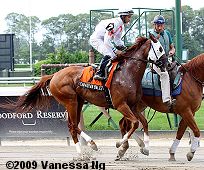 The undercard feature on Man O'War day was the $65,000 Lottsa Talc Stakes for New York bred older fillies and mares sprinting 7 furlongs on the Widener turf course. 2-1 second choice Canadian Ballet and jockey Alan Garcia battled for the lead with 9-1 Weathered for the first half mile through fractions of 23.39 and 46.19, and was all out to hold off the late-running 6-5 favorite Meriwether Jessica in the final strides to get the win by a neck in 1:21.73. It was another 1 1/4 lengths back to 11-1 Karakorum Fugitive and 13-1 Them There Eyes who dead-heated for the show spot. The Linda Rice trainee improved her record to 5 wins, 3 seconds, and 1 third in 13 starts, earning $286,659 for owner Obviously NY Stable.