The $1 million Shadwell Travers Stakes (G1) is the highlight of the Saratoga meeting. Dubbed the "Midsummer Derby", it features the best 3-year-olds of the east coast going the classic trip of 1 1/4 miles on the main track. Overnight rains and showers during the card rendered the track sloppy, and kept the crowd down to just 34,221 on Saturday afternoon. Quality Road was sent off as the 3-2 favorite in the field of seven, coming off three straight wins in the Fountain of Youth, Florida Derby, and the Amsterdam. In to challenge him included 3-1 second choice and Belmont Stakes winner Summer Bird, coming off a 2nd place finish to Rachel Alexandra in the Haskell, and 9-2 third choice Kensei, winner of both the Dwyer and the Jim Dandy, the major local prep for the Travers.

14-1 Our Edge battled for the lead with Kensei through fractions of 23.19 and 46.88, before Kensei took over the lead approaching the far turn through 3/4 in 1:11.12. Summer Bird stalked the pace in third out 4 wide the whole way. Entering the stretch, jockey Kent Desormeaux asked Summer Bird to challenge for the lead as he easily passed the tiring pacesetters through 1 mile in 1:36.61. 17-1 Hold Me Back, last early, put in a strong rally late but was no match for Summer Bird who cruised under the line 3 1/2 lengths in front in a time of 2:02.83 over the sloppy track. It was another 1 1/2 lengths back to favorite Quality Road third. 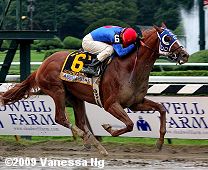 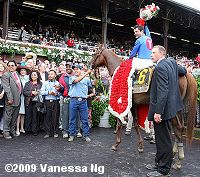 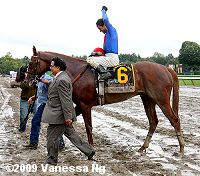 Left: Summer Bird in the winner's circle with trainer Tim Ice at his hip. Ice said, "He proved to us he belonged here. I was asked where he was going to be, and I'm thinking 4 or 5 lengths off the pace. I also said I'd let Kent make that decision. He knows the colt and I left it all up to him. I have confidence in my horse. I'm glad the owners have enough confidence in me to entrust him to me. Whatever you guys want to call him, 'The Other Bird,' he's won the Belmont and the Travers. For him starting his first race in March to be where he's at now could only show what a great horse he is now. I feel like I do (have the best 3-year-old colt). He beat Quality Road today. There was a lot of hype of (Quality Road) going into the Kentucky Derby and nobody seemed to dismiss him coming off that 6 1/2 furlong race. I have a lot of respect for Quality Road and I have a lot of respect for my horse. So maybe he is champion 3-year-old colt right now."

Right: Owner Dr. Kalarikkal Jayaraman leads Summer Bird to the winner's circle. Jayaraman said, "We have utmost confidence in Tim (Ice). He has done a very good job. One of these days he will be in the Hall of Fame." 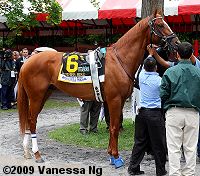 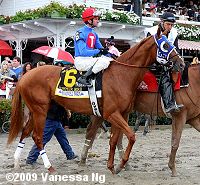 Left: Summer Bird gets saddled in the paddock.

Right: Summer Bird heads out to the track for the post parade. His jockey Kent Desormeaux, winning his first Travers said, "I was rating him. You can only rate a horse who actually wants to go faster; otherwise you're knuckling on him to keep up. That is the ultimate feeling for a jockey, having a horse on his fingertips, being on the bridle, not shoving on his neck, trying to make him keep up. That was the exact situation I was in the Belmont; I mean I was restraining him until inside the 3/8 pole, when I turned him loose. It was deja vu today. With all due respect to (the Haskell), I think this whole camp knows that I don't believe for a second that Summer Bird enjoyed the going that day. He was completely different. It was sealed and very, very, very fast. Today the track is a different track, there's some depth to the material underneath his feet, it acts like a cushion and he enjoys that. I think the real Summer Bird was able to strut his stuff." 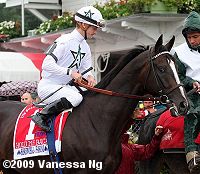 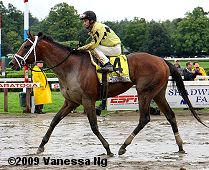 Left: Second place finisher Hold Me Back heads out for the post parade. His trainer Bill Mott said, "He ran great today. I'm thrilled. We were second best but he ran big." His jockey Julien Leparoux added, "He broke well and we dropped back, as was the plan. I had to go a little wider than I wanted to and got caught behind Ramon's horse (Charitable Man) but we didn't check and once he got clear, he put in a big run."

Right: Third place finisher Quality Road returns after the race. His trainer Todd Pletcher said, "I thought he was stuck in a difficult spot from there. He ran well. I thought considering everything he ran a good race." His jockey John Velazquez added, "He bumped me off going into the gate. He didn't break very good. There was nothing I could do, but he came back and got himself back into the race. He handled it pretty well. There was no room for me to go around the far turn. I had to wait for some running room. Once we got some room, he was starting to run again."


The sprinting counterpart to the Travers is the $300,000 NetJets King's Bishop Stakes (G1), a 7 furlong trip for 3-year-olds. Woody Stephens and Tom Fool winner Munnings was sent off as the 9-5 favorite in the field of 9, exiting a third place finish in the Haskell. In to challenge him included 3-1 second choice Big Drama, a close second in the West Virginia Derby last out after winning the Red Legend Stakes, and 4-1 third choice Capt. Candyman Can, second in the Amsterdam last out after winning the Bay Shore and the Matt Winn. 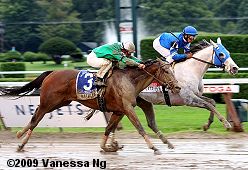 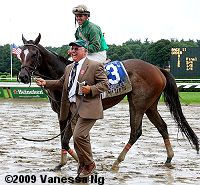 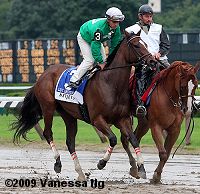 Left: Owner Dr. Joe Rauch leads Capt. Candyman Can to the winner's circle. His trainer Ian Wilkes said, "I thought he was going to go right by Vineyard Haven. Watching it live, I said to Tracy, 'I think there was some contact, I think the other horse came out,' but it was hard to tell until you saw the head-on. I think the stewards made the correct decision. I'll take it any way I can get it. I'm going to enjoy today. Life is good right now."

Right: Capt. Candyman Can in the post parade. His jockey Javier Castellano said, "(Alan Garcia aboard Vineyard Haven) came out and he bumped twice into me and my horse. He hit my horse right in the shoulder and caused him to lose his momentum and he still only got beat by a head. That's what cost me the race today. Without the bump, (Capt. Candyman Can) would definitely have pulled away to win. It was very obvious. You can see my horse was going to go by the other horse. He felt really strong today." 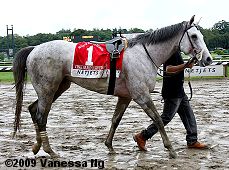 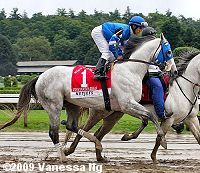 Left: Second place finisher (disqualified from first) Vineyard Haven circles as they wait for the results of the inquiry.

Right: Vineyard Haven in the post parade. His trainer Saeed bin Suroor said, "I'm very proud. I mean, he won the race, it's just too bad it happened like it did. It was just an accident. The jockey tried to keep him straight - he tried to pull him over two or three times. It's just one of those things that happens in races. I'm happy he's back and that he ran well. We'll find another race for him. I'm pleased, but I'd be more pleased if he had actually won." His jockey Alan Garcia added, "He came out of the gate running. Coming for home, he was starting to get a little bit tired and came out at the end. He overreacted when I was trying to bring him back to the inside." 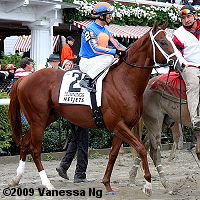