There were two stakes races contested on the turf at Saratoga on Travers day, however, due to overnight rains the other turf races on Saturday afternoon were moved to the main track. A field of seven older fillies and mares went to post in the $200,000 Ballston Spa Handicap (G2), a 1 1/16 mile trip over the Mellon Turf Course. Nassau Stakes winner Rutherienne, who was 3rd in this race last year, was sent off as the 9-5 favorite coming off a close third place finish in the Diana last time out. In to challenge her included De La Rose Stakes winner Cocoa Beach as the 5-2 second choice, and My Princess Jess at 4-1, fifth in the Diana last out after finishing third in the Just A Game.

8-1 Captain's Lover was rushed to the lead by jockey John Velazquez and she set a slow early pace of 25.85, 51.92, and 1:17.22 over the soft going, with Cocoa Beach stalking her a length behind. Entering the stretch, Rutherienne, who was 5th early, moved up to take the lead, getting the mile in 1:47.25. but 24-1 longest shot Salve Germania, last for the opening 3/4 mile, closed with a rush down the center of the course to nail Rutherienne in the final strides to get the win by a head in 1:47.25. It was just 1/2 a length back to My Princess Jess third. 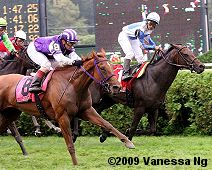 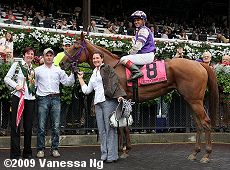 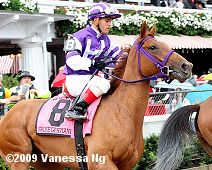 Left: Salve Germania in the winner's circle. Maren Hennig, wife of the groom (accompanying Olga Hickst, wife of trainer Waldemar Hickst) said, "We had always had high hopes for her since she was a yearling because she was well-bred. She was running in long races in Germany and we decided to cut back in distance, but there were no suitable races in Germany. We decided to look in the United States for shorter races and firm ground. We found the shorter race, but the ground wasn't firm today! We were surprised that she acted up like that. I had been leading her every day here and she was very calm."

Right: Salve Germania heads out to the track before the race. Her jockey Javier Castellano said, "In the paddock she was hard to handle. It was her first time in this country, she was a little scared of the people, it was so crowded. In the race she settled beautifully. It was a slow pace and she settled right behind the horses and when asked she kicked very good. (When she ran off in the post parade) I was a little disappointed in the moment. You're looking forward to settling down your horse before the race, when they're acting like that, you start to worry a little bit because you take a lot of energy before the race. After the post parade she settled down beautiful and I think it was the key to the race." 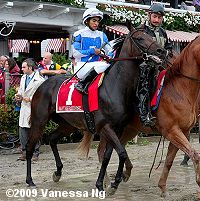 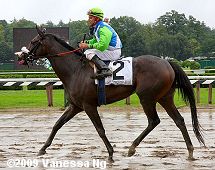 Left: Second place finisher Rutherienne heads out for the post parade. Her trainer Christophe Clement said, "She ran very well. She was just second best on the day. I think she would have been very tough on firm turf." Her jockey Alan Garcia said, "I got beat today, that's all I can say."

Right: Third place finisher My Princess Jess returns after the race. The 4-1 third choice settled in midpack fourth early under jockey Cornelio Velasquez, came out three wide into the stretch and closed well to get third beaten 1/2 a length. The Barclay Tagg trained daughter of Stormy Atlantic improved her record to 5 wins, 3 seconds, and 3 thirds in 14 starts, earning $491,515 for owner Lael Stables (Roy and Gretchen Jackson). 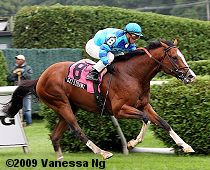 Kicking off the stakes action on Travers Day was the $80,000 Lure Stakes for 3-year-olds going 1 mile on the inner turf course. 7-1 Get Stormy was loose on the lead by as many as 2 lengths through fractions of 24.47, 48.95, and 1:14.22, while being stalked by 6-1 Strike Again the whole way. Through the stretch, 6-1 Mikoshi, who was third early, gained on the pacesetter but Get Stormy held him off by 3/4 length at the line, completing the trip in 1:37.91 over the soft course. It was a long 6 1/2 lengths back to 7-2 second choice Golden Mexico third, while 3-1 favorite Florentino finished a disappointing 7th beaten 18 1/2 lengths. 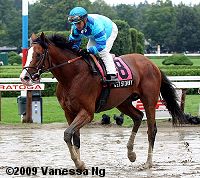 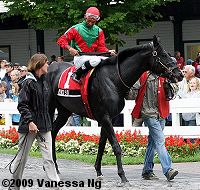 Left: Get Stormy returns after the race.

Right: Second place finisher Mikoshi in the paddock before the race.