The first of three Grade 1 events on Travers Day at Saratoga Race Course is the $300,000 Ballerina Stakes (G1). A field of just five older fillies and mares sprinted 7 furlongs on the main track, with La Brea Stakes winner Indian Blessing sent off as the 6-5 favorite exiting a disappointing fourth place finish in the Desert Stormer Handicap after finishing second in the Dubai Golden Shaheen. In to challenge her included 3-2 second choice Informed Decision, coming into this race off five straight wins including the Humana Distaff at Churchill and the Chicago Handicap at Arlington, and 5-1 third choice Music Note, cutting back to a sprint distance after finishing a distant 10th in the Ogden Phipps Handicap last out.

Indian Blessing battled for the lead with Informed Decision down the backstretch through an opening quarter of 23.13, before Music Note came through on the rail to take over the lead on the far turn through a half in 45.76. Entering the stretch, jockey Rajiv Maragh asked Music Note for run and she accelerated away, opening up a 1 1/2 length advantage on Indian Blessing through 3/4 in 1:09.63, and cruised under the line 5 1/4 lengths in front in a time of 1:22.10 over the sloppy main track. It was a length back from Indian Blessing to Informed Decision third. 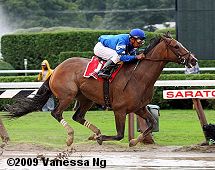 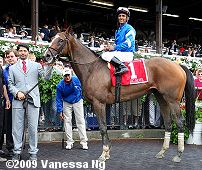 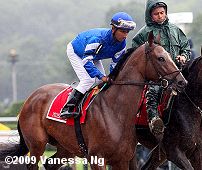 Left: Music Note in the winner's circle with trainer Saeed bin Suroor on the left. Suroor said, "Music Note ran a big race and we are happy with her. She's really healthy and back in exactly the same form she was last year. She's a tough filly and she always tries hard. I talked to the jockey and told him to just sit in behind the lead. He gave her a brilliant ride and she handled the mud really well today. Maybe we'll find a (one turn) race for her (at Belmont). We'll see how she comes back, but so far we're happy."

Right: Music Note in the post parade. Her jockey Rajiv Maragh said, "It was very fortunate that she took me there. She got me there on her own will. I think that was to our advantage at that point where we weren't 8 or 9 lengths out of it. I have been on her a couple of times in the morning and I became familiar with her. When I saw Indian Blessing come alongside of us at the top of the stretch, my filly just started sprinting away." 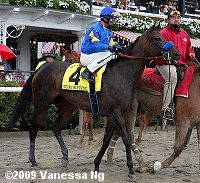 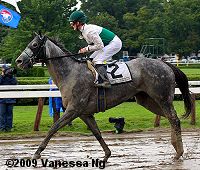 Left: Second place finisher Indian Blessing heads out for the post parade. Her jockey John Velazquez said, "It was a good trip. She broke sharp like she always does. I tried to give her a good chance the first part of the race. It wasn't my plan to get out in front. I planned for second or third and she just happened to do that and the other two horses didn't go so I just happened to be there and she got tired. The other horse just ran better than her today. I think she's just coming back and she's getting better now."

Right: Third place finisher Informed Decision returns after the race. Her trainer Jonathan Sheppard said, "We're a little disappointed. I think the track condition may have been a factor." 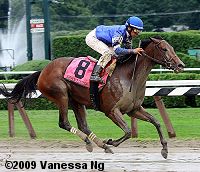 The $100,000 Victory Ride Stakes (G3) featured a field of 9 three-year-old fillies sprinting 6 furlongs on the rain-soaked main track at Saratoga. Sara Louise was sent off as the 2-1 favorite despite being unraced since finishing a distant second behind Rachel Alexandra in the Golden Rod at Churchill Downs in November. In to challenge her included 5-2 second choice Selva, fourth in the Prioress last out, and the 2-horse entry of Femme Fatale winner Bold Union and Test Stakes 6th place finisher All Of Her Twist, coupled in the wagering at 7-2.

Jockey John Velazquez sent Bold Union to the front and she battled for the lead with 18-1 longest shot Juliet's Spirit through quick fractions of 21.95 and 44.81. The pair continued to duel to mid-stretch, getting 5/8 in 56.90, but Sara Louise, who settled in fourth early, came out four wide into the stretch to pass the tiring pacesetters late, drawing clear to win by 2 lengths in 1:09.66. It was just 1/2 length back from Bold Union to Juliet's Spirit third.
Results chart 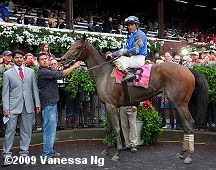 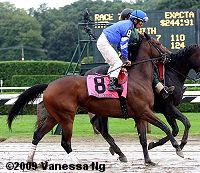 Left: Sara Louise in the winner's circle with trainer Saeed bin Suroor on the left. Suroor said, "When she was in Dubai, she had tiny problems. She had tendon problems in both of her front legs. We gave her time. The filly was doing really well. She was working well. She has tactical speed. I talked to Edgar and he said she can go a mile. The filly has class. (The sloppy track) was a question mark before the race. We couldn't wait too long until September. She needed the race and she'll improve from this race. We'll have to wait on (another meeting with Rachel Alexandra). She's in a different class now. Our filly beat her before. We'll have to wait until the right time."

Right: Sara Louise in the post parade. Her jockey Edgar Prado said, "It was a beautiful trip. She broke real sharp. I was able to get in a little hole and see what kind of speed everyone else had. I kept having to hold her back. I was waiting and waiting and at the top of the stretch, when I finally let her loose she had a nice kick in her. It was a good pace. I was kind of expecting that. It worked out good for me. I was biding my time and waiting to cut her loose. I knew even with that fast pace she could kick it in and finish strong." 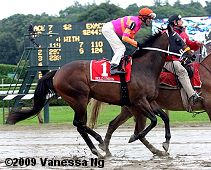 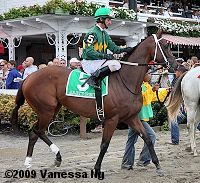 Left: Second place finisher Bold Union in the post parade. The 7-2 third choice battled for the lead down on the rail under jockey John Velazquez, until being passed by the winner at the 70 yard pole. The Kelly Breen trained daughter of Dixie Union improved her record to 4 wins, 1 second, and 1 third in 9 starts, earning $214,800 for owners George and Lori Hall.