The feature race on Friday at Saratoga was the $200,000 Bernard Baruch Handicap (G2), a 1 1/8 mile inner turf event for older horses. A field of 10, with 9 betting interests due to a coupled entry, went to post on a cloudy, cool afternoon, with the Darley/Godolphin entry of Justenuffhumor, winner of the Fourstardave Handicap last out, and Colony sent off as the 9-10 favorite. Cowboy Cal was the 3-1 second choice, coming off a third place finish in the Fourstardave but winless since January, and Seaspeak was the 6-1 third choice, coming off a third in the Firecracker at Churchill Downs after winning the Dallas Turf Cup at Lone Star.

Seaspeak and Cowboy Cal battled for the lead first time past the stands and around the clubhouse turn through a quarter in 23.23 and a half in 46.94 over the firm course, with 56-1 longest shot Kutais stalking them in third early. Down the backstretch, Cowboy Cal opened up a 1 1/2 length lead on Seaspeak through 3/4 in 1:11.35. Entering the stretch, Cowboy Cal continued to lead, gaining a 2 length advantage on the tiring Seaspeak through 1 mile in 1:35.62. Justenuffhumor, who was as far back as 8th early, came out wide on the far turn and closed strongly down the center of the course to catch Cowboy Cal late, winning by a half length in a final time of 1:47.38. It was another 2 3/4 lengths back to 12-1 Sette E Mezzo in third. 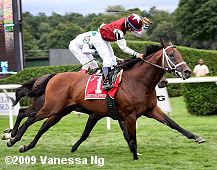 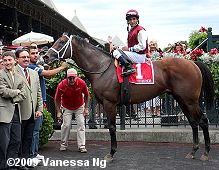 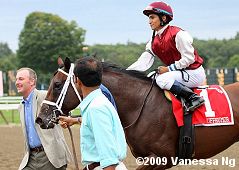 Left: Justenuffhumor in the winner's circle with trainer Kiaran McLaughlin second on the left.

Right: Justenuffhumor heads into the winner's circle. McLaughlin said, "It's a special horse that can make that move. I haven't been around too many that if you can get them in the gate, they'll just find a way to get to the wire first, and this is just one of those horses. He's a little tricky in the gate sometimes, but I feel so confident getting him in the gate, if it's a mile, or 1 1/8, or 1 1/16, he'll find the wire first and that's a great feeling. I was concerned when Tom Durkin said we were 12 lengths back. He put in a big run. We were pointing towards this race and we have to talk about where we go from here." 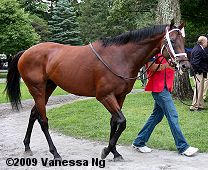 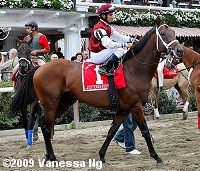 Left: Justenuffhumor in the paddock before the race.

Right: Justenuffhumor heads out for the post parade. His jockey Alan Garcia said, "It was a good run. That's a nice horse. They did an excellent job with this one. I wasn't worried today. He was comfortable. I was very confident throughout the race. I knew he'd wait until the 1/4 pole to give the best he had and he showed he was the best horse." 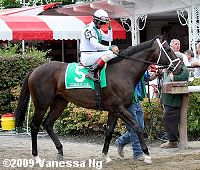 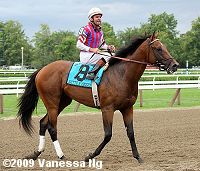 Left: Second place finisher Cowboy Cal heads out for the post parade. His trainer Todd Pletcher said, "He ran super. Tough beat. We'll either go to Keeneland for the Shadwell Turf Mile or to California for one of the prep races out there. We'll see." His jockey John Velazquez added, "He gave me everything he had. He goes out there and tries each time. He's so strong. He brings me out to the lead each time. I'm not going to fight him and hold him back because he'll get upset. Still, he was game out there. I'm not going to make any excuses." 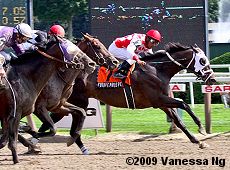 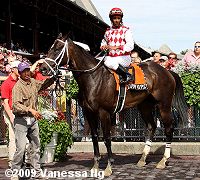 The $78,000 Funny Cide Stakes featured a field of 7 older New York-breds going 1 1/8 miles on the main track. 3-1 second choice R Clear Victory battled on the front end with 6-5 favorite Future Prospect through fractions of 22.84, 46.12, and 1:10.57. Entering the stretch, R Clear Victory began to tire badly eventually finishing last. Future Prospect inherited the lead and held off late-running 20-1 longest shot Naughty New Yorker in deep stretch to get the win by a neck in 1:50.12. It was just a nose back to 9-1 Dr. D.F.C. in a three-horse blanket photo finish.