The feature race on the Sunday after the Travers Stakes was the $400,000 Personal Ensign Stakes (G1). A field of 8 older fillies and mares went to post in this 1 1/4 mile main track feature before just 18,014 spectators. Icon Project was sent off as the 9-5 favorite, exiting a runner-up finish in the Delaware Handicap after winning the New York Stakes by 13 lengths. In to challenge the Martin Wolfson trainee included 5-2 second choice Miss Isella, second in the Go For Wand Handicap last out after winning the Fleur de Lis and Louisville Distaff, and 4-1 third choice Unbridled Belle, third in the Delaware Handicap after winning the Obeah Handicap, both at Delaware Park.

43-1 longest shot Weathered battled for the lead with Unbridled Belle through fractions of 23.81, 47.62, and 1:11.31 over the good track, while favorite Icon Project stalked them to their outside in third. Entering the stretch, Icon Project passed the tiring pacesetters to take the lead, getting the mile in 1:37.04. Swift Temper, who was 6th early, came out wide into the stretch for her rally but was no match for Icon Project, who drew away the length of the stretch to win under wraps by 13 1/2 lengths in 2:02.37. It was another 5 1/2 lengths back from Swift Temper to 23-1 Morena third. 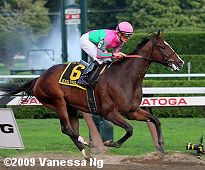 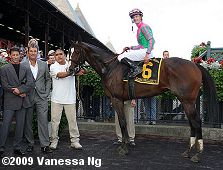 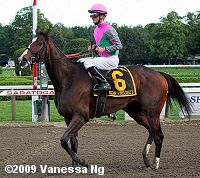 Left: Icon Project in the winner's circle with trainer Martin Wolfson (far left) and owner Andrew Rosen. Wolfson said, "I had been wanting to run her on the dirt. She's by Empire Maker, and she trained great on dirt, ever since I got her from overseas. I thought she'd win, but I didn't think she'd win by that far. She ran the same way in the New York Handicap. She would have won the race in Delaware if she'd gotten the same trip she got today. At the 3/8 pole, the way she was tugging on Julien, I knew it was just a matter of how far she'd win by." 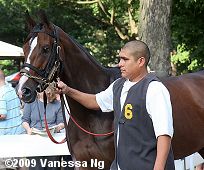 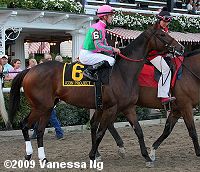 Left: Icon Project in the paddock before the race.

Right: Icon Project heads out to the track for the post parade. Her jockey Julien Leparoux said, "For once she left the gate well, so I lay pretty close to the pace today. At the 3/8 pole she just grabbed the bit from me and she kept on going. She didn’t get tired at all, she just kept on going the whole way." 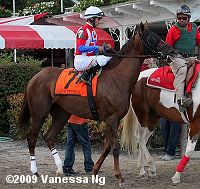 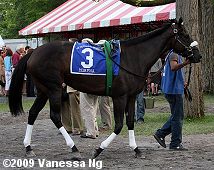 Second place finisher Swift Temper heads out to the track. Her trainer Dale Romans said, "That filly ran a freaky race. It was very impressive. Of course, we are disappointed that we didn't win, but we're still happy with the way our mare ran, but she was outrun by the winner today." Her jockey Alan Garcia added, "She had a little problem of handling the track because it was still wet. She made me work harder than the last time (in Delaware). When I saw the other filly run away, I just wanted to hold on for second."

Right: Third place finisher Morena in the paddock. The 23-1 outsider settled behind the pace in fourth early under new jockey Jose Lezcano, then rallied through the stretch to nose out Miss Isella for third, beaten 19 lengths. The Michael Matz trainee improved her record to 10 wins, 3 seconds, and 2 thirds in 18 starts, earning $171,011 for owner El Catorce Stable. 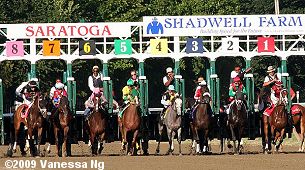 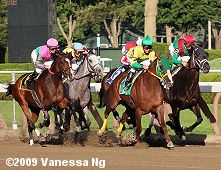 Left: The horses break from the gate for the 2009 Personal Ensign Stakes (G1) at Saratoga Race Course.

Right: Eventual winner Icon Project tracks early leaders Weathered and Unbridled Belle as they pass by for the first time.