The $200,000 Remsen Stakes (G2) featured a field of 6 two-year-olds going 1 1/8 miles on the main track. Nashua Stakes winner Buddy's Saint was sent off as the 3-4 favorite, undefeated in his two starts so far. In to challenge him included 8-5 second choice Homeboykris, winner of the Champagne Stakes at Belmont last out, and 6-1 third choice Citrus Kid, winner of the Dover Stakes at Delaware Park by 5 lengths after breaking his maiden by 3 3/4 lengths.

Citrus Kid was sent to the front and down to the rail to save ground, setting the early pace of 24.01, 48.18, and 1:13.23 over the fast track while being stalked by Homeboykris just to his outside 1/2 a length behind. Favorite Buddy's Saint sat third down the backstretch. Turning for home, the pacesetters tired from their duel, as Buddy's Saint took command at the 5/16 pole and quickly opened up a 3 length lead in mid-stretch through 1 mile in 1:39.46. 21-1 Peppi Knows, fourth early, put in a late rally of his own but was no match for Buddy's Saint, who drew off through the stretch to win by 4 3/4 lengths in 1:52.95. It was another 2 1/4 lengths back to pacesetter Citrus Kid third. 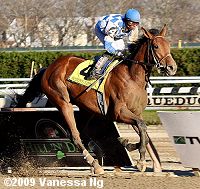 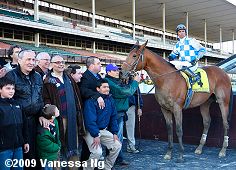 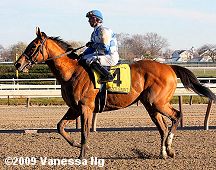 Right: Buddy's Saint returns after the race. His trainer Bruce Levine said, "He ran well. I thought he was quite impressive. I'd thought he'd be closer to the lead, but he doesn't need it. He's very versatile. He's still learning. I don't think you've seen the best of him yet. He's a big horse, and I still think he has to grow into his frame. The two-turn race should set him up for the spring. Believe me, I wouldn't trade places with anyone in America. He'll go to Gulfstream Park for the winter." 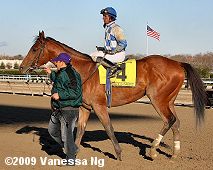 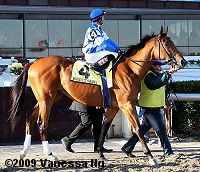 Right: Buddy's Saint heads out for the post parade. His jockey Jose Lezcano said, "The two horses in front of me went on and I just settled behind them. When I asked him at the 3/8 pole I thought (Homeboykris) had a little more momentum, but my horse passed right by like it was nothing. He gave me a really good run." 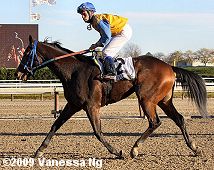 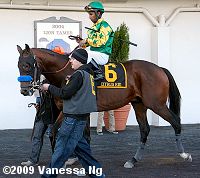 Left: Second place finisher Peppi Knows returns after the race. The 21-1 fourth choice saved ground early back in fourth under regular rider Luis Belmonte, then came out 4 wide for the drive, passing tired horses to get 2nd place beaten 4 3/4 lengths. The Sam Keyrouze trained son of Stephen Got Even improved his record to 3 wins, 1 second, and 1 third in 5 starts, earning $118,400 for owner Philip J. Messina.

Right: Third place finisher Citrus Kid in the paddock before the race. The 6-1 third choice took the lead on the first turn under jockey Rajiv Maragh, led for 6 furlongs, then gradually tired through the final 3/8 to finish third beaten 7 lengths. The John Terranova trained son of Lemon Drop Kid improved his record to 2 wins and 1 third in 3 starts, earning $88,004 for owners Golden Goose Enterprises, James Covello, Mike Imperio, and Nick Sallusto.


Kicking off the stakes action on Cigar Mile day was the $200,000 Demoiselle Stakes (G2) for 2-year-old fillies going 1 1/8 miles. Protesting, a maiden winner last out by 5 lengths, was sent off as the 5-2 favorite in the field of 7 (6 betting interests) over 2.80-1 second choice Fuzzy Britches, third in the Miss Grillo last out after finishing second in the Sorority. 3-1 Tizahit, fourth in the Tempted after finishing second in the Blue Hen Stakes, completed the top three on the board.

Jockey Rajiv Maragh sent 28-1 longest shot Oh Diane to the front on the clubhouse turn, setting early fractions of 23.59, 49.35, and 1:15.11 while as many as 1 1/2 lengths in front of Fuzzy Britches and Tizahit stalking the pace second and third early. Entering the stretch, Oh Diane tired allowing Tizahit to inherit the lead at the 3/16 pole. Protesting, fifth early, came out wide into the stretch and put in a strong rally but Tizahit held her off by a length at the line, getting the win in 1:53.09 over the fast track. It was a long 3 3/4 lengths back to Fuzzy Britches third. 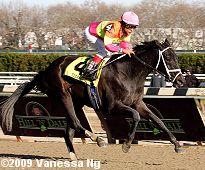 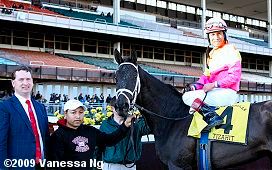 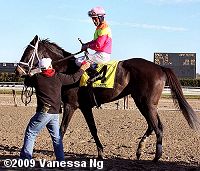 Left: Tizahit in the winner's circle with her trainer George Weaver on the far left. Weaver said, "I thought Edgar did a good job placing her. In my eyes she was really just kind of a closer, didn't have a whole lot of speed, but he recognized that there weren't a lot of other horses with speed. He placed her forwardly without going crazy and just gave us a good trip, no trouble. Obviously with the outcome I couldn't be more delighted with the trip. We'll probably give her a little bit of a breather. We were thinking that before this race, so I'm not gung ho to get her back in the entries right away. But she's always acted like she was a nice filly, so we'll just enjoy this and see how it goes."

Right: Tizahit parades before going to the winner's circle. 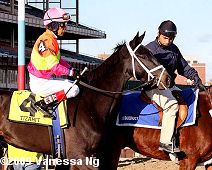 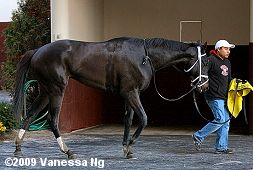 Left: Tizahit heads out for the post parade. Her jockey Edgar Prado said, "Beautiful trip, everything worked out perfect. She broke running out of there and I was where I wanted to be most of the way. It was a slow pace and my filly was doing everything comfortably. When I asked her, she kicked it in strong. I don't think (Protesting) could have gone by today. She was just waiting for competition. Every time I hit her she picked it up and kept on running. The distance was no problem today."

Right: Tizahit heads back to the barn after the race. 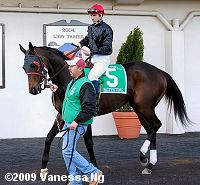 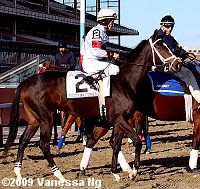 Left: Second place finisher and beaten favorite Protesting in the paddock before the race. The 5-2 favorite broke slowly and settled back in fifth early under new jockey Eddie Castro, came out for the drive but could not gain on the winner late, finishing second beaten a length. The Shug McGaughey trained daughter of A.P. Indy improved her record to 1 win, 1 second, and 2 thirds in 5 starts, earning $81,900 for owner-breeder Phipps Stable.

Right: Third place finisher Fuzzy Britches heads out for the post parade. The 11-4 second choice stalked the pace just behind the leaders early under new rider Ramon Dominguez saving ground around both turns, then came through between horses to get third beaten 4 3/4 lengths. The Juan Rodriguez trained daughter of Pollard's Vision improved her record to 1 win, 1 second, and 2 thirds in 4 starts, earning $70,300 for owner-breeder Lansdon B. Robbins III and co-owner A.Z. Azalea Stables.