The $1.2 million Whitney Stakes (G1), run at 1 1/8 miles over the main track, is the premier contest at Saratoga for older horses and is a Breeders' Cup Challenge "Win and You're In" race earning the winner automatic entry into the Classic (G1). Conditions were less than ideal, after overnight rains downgraded the main track to good and the turf courses soft at the start of the card, and then the 30,306 fans in attendance endured a thunderstorm before the Whitney which led to a 40 minute delay, with the field remaining under cover in the saddling shed as the rains rendered the track sloppy for the feature. In addition, the stewards cancelled the final two races on the card, the Waya (G3) and the Lure Stakes, both turf events, rescheduling them for next weekend, so the Whitney was the final race run on Saturday.

Last year's Jockey Club Gold Cup (G1) winner Diversify was sent off as the 8-5 favorite in the field of 8 off his win in the Suburban (G2). In to challenge him included 3-1 second choice Mind Your Biscuits, winner of the Dubai Golden Shaheen (G1) before 2nd in the Metropolitan Handicap (G1), and 15-4 third choice Backyard Heaven, 6th in the Stephen Foster (G1) after winning the Alysheba (G2). 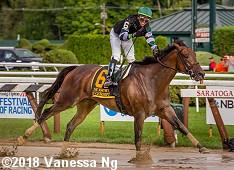 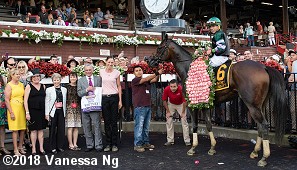 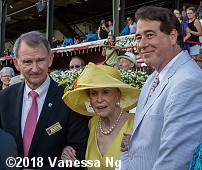 Left: Diversify in the winner's circle. Winning trainer Rick Violette said, "All these horses were stars. They had their tack on for an hour in the paddock and they behaved remarkably well and they ran a great race, we happen to be best today. I was hoping they would run the race five minutes earlier to just get it over with, but I felt the outside of the track was playing better than the inside and I thought maybe sealing the track in the rain might have even it out a little bit, and I felt better about that. We planned on being very aggressive, period, and see what would happen. If it were to be a mistake, so be it."

Right: Marylou Whitney in the winner's circle with Chris Kay, CEO of NYRA, (left) and her husband John Hendrickson. 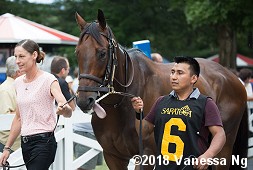 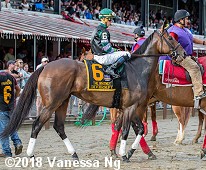 Left: Diversify in the paddock before the race. Winning jockry Irad Ortiz Jr. said, "He was a little nervous, but he was feeling good [in the paddock]. They sealed the track, and I think that helped him a little bit. I have no complaints. I wanted to be on the lead. He did everything right for me. He was ready. I knew somebody was going to be coming, no matter what. It's a Grade 1, and there's nice horses who want to win the race. He proved he could keep going. Only nice horses can do that. He was steady; he wasn't dying at the end, he'd keep trying. He did it the right way."

Right: Diversify heads out for the post parade. Violette added, "[I] will talk to the owners and enjoy this race but the Jockey Club Gold Cup will certainly be part of the plan." 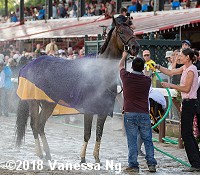 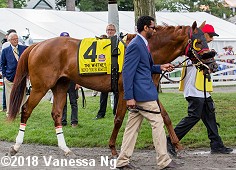 Left: Diversify gets hosed off after the race.

Right: Second place finisher Mind Your Biscuits in the paddock. Trainer Chad Summers said, Diversify has good cruising speed, and once he goes that 46 and change, and he's in front by three or four he's a tough horse to run down. He's a good New York-bred, but we look forward to seeing him down the road. He struggled at Churchill. We think we're going to love Churchill. At this point we'll see how (Mind Your Biscuits) comes out of it. I thought he galloped out of it really good. We'll talk to Joel and the connections, but I see no reason not to go on, to kind of move on. Obviously, you have to get one more win and you're in, to qualify and get in, but I think he showed up with another big effort here today, so I see no reason not to move forward." 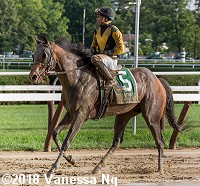 Right: The horses break from the gate for the Whitney. 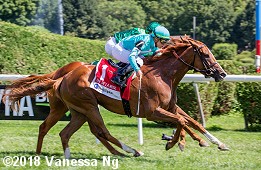 Kicking off the stakes action, the $100,000 Fasig-Tipton De La Rose Stakes featured a field of 7 older fillies and mares going 1 mile on the inner turf course. Last year's Poule d'Essai de Pouliches (G1) winner Precieuse was sent off as the 3-2 favorite, unraced since last of 7 in the Coronation Stakes (G1) at last year's Royal Ascot, over 5-2 Uni, winner of the Plenty of Grace Stakes, and 11-4 On Leave, 5th in the Just a Game (G1). 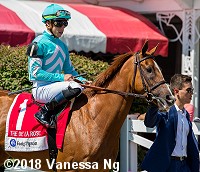 Left: Uni in the winner's circle. Winning trainer Chad Brown, who completed the exacta said, "Both horses ran great. No surprises. They both were training super and that I was confident that they would handle the soft ground and Uni handled it a little bit better today. They both were training very similar. [Uni] has done well and thankfully we've been able to get her home after her illness [shipping fever] and was able to get her back feeling right again and training well. We picked this race out about three weeks ago and we said, she is doing well, so let's get her back started. And, man, she ran great today."

Right: Uni heads out for the post parade. Winning jockey Irad Ortiz Jr. said, "She broke a little. She hit the door pretty good in the first part of the race, so I let her settle and then come running on in the end. The turf was a little soft. The outside part of [the course] is a little better, but it was pretty fair." 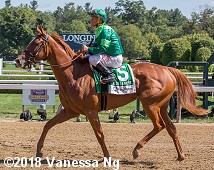 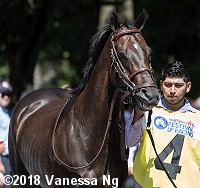 Left: Second place finisher and beaten favorite Precieuse returns after the race. Trainer Chad Brown said, "[Precieuse] is off a long layoff and she had a right to get a little tired at the end and I think she ran great and I think she has a great future in front of her too." Jockey Javier Castellano said, "She was impressive. She had to go two turns, and usually European horses are [used to] running straight. This time, she had to turn and got a little confused, but I could tell in the last part of the race, she started switching leads. I'm not disappointed at all. I think she's one of the best fillies in the country. I think she's going to be real good in the long term. [The turf] was real soft. My filly handled it well. I can't complain about the turf. Those European horses make the adjustment. It was perfect for her."

Also on the card: The Test Stakes