The third-richest race contested at Churchill Downs after the Kentucky Derby and Oaks is the $500,000 Stephen Foster Handicap (G1), featuring some of the top older horses in the country going 1 1/8 miles over the main track, with the winner earning automatic entry into the Breeders' Cup Classic (G1) under the Win and You're In promotion. Conditions were excellent on Saturday night, with clear skies and temperatures in the 90's, with the main track fast and the Matt Winn turf course firm. Alysheba (G2) winner Backyard Heaven was sent off as the 4-5 favorite in the field of 9. In to challenge him included 7-2 second choice Irish War Cry, winner of the Pimlico Special (G3), and 13-2 third choice Pavel, 4th in both the Dubai World Cup (G1) and Gold Cup at Santa Anita (G1).

Jockey John Velazquez sent 23-1 Uncle Mojo to the lead first time by through fractions of 23.58, 47.25, and 1:11.95 while pressed by Irish War Cry and stalked by Backyard Heaven. On the far turn, Irish War Cry stopped abruptly leading to jockey Jose Ortiz pulling him up to be vanned off. Entering the lane, Uncle Mojo tired badly, while jockey Mario Gutierrez, 4th early under Pavel, came out 3 wide to inherit the lead, opening up by 3 lengths through 1 mile in 1:36.25. Kept to task by Gutierrez, Pavel cruised to a 3 3/4 length win over late-running 15-2 Honorable Duty in 1:49.21. It was a neck back to 68-1 longest shot Matrooh third, while favorite Backyard Heaven tired and finished 6th. 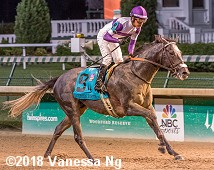 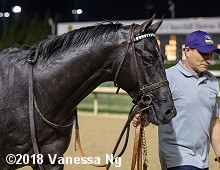 Pavel in the winner's circle. Winning jockey Mario Gutierrez said, "He got the perfect setup tonight. He's been training really well into this race so I was confident he'd run well. When we turn for home I could feel like I had a lot of horse underneath me still. It was a great feeling and he won very easily under his own. I knew this horse could be better than his last couple of races and he had some bad luck. He overcame that tonight."

Right: Pavel heads back to the barn. Winning trainer Doug O'Neill said, "I really have to thank the owners with this horse and my brother, Dennis, who helped us pick out this horse. In his last couple of races, he got really worked up in the paddock and didn't run to his best effort. We know he likes to travel and I have to thank our groom and exercise rider for coming out here early with him and getting acclimated to the track. I'm not sure what we'll do next with him. I see myself nudging up to some adult beverage tonight then thinking about where we go next. We were very optimistic with him all along and to see him put it together was great. We went through a bit of a funky phase with him and had some traffic troubles in his last couple of races." 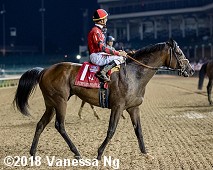 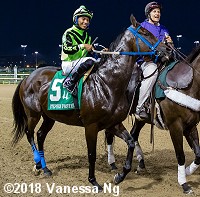 Left: Second place finisher Honorable Duty returns after the race. Trainer Brendan Walsh said, "It's a bummer running second again in this race but we'll get it one year. The winner ran a good race; we were just second best." Jockey Corey Lanerie added, "We got a great trip and settled into a perfect position. The winner just simply drew away in the stretch." 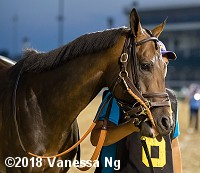 Sixth place finisher and beaten favorite Backyard Heaven walks over before the race. Jockey Irad Ortiz Jr. said, "It wasn't his day today. He just never really picked up things around there. He just didn't fire." Owner Ken Ramsey added, "I'm still leaving here with a smile on my face. It was a great night of racing but it just wasn't our day." 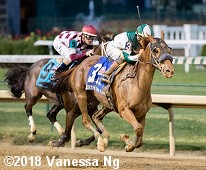 The distaff counterpart to the Stephen Foster is the $200,000 Fleur de Lis Handicap (G2) for older fillies and mares also going 1 1/8 miles on the main track, a "Win and You're In" for the Breeders' Cup Distaff. Top Flight Invitational winner and DuPont Distaff (G3) runner-up Blue Prize was sent off as the 2-1 favorite in the field of 9. In to challenge her inlcuded 3-1 Valadorna, winner of the Doubledogdare (G3) and 4-1 Awestruck, winner of two straight allowances. 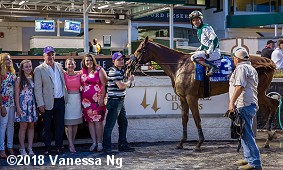 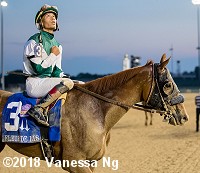 Left: Blue Prize in the winner's circle. Winning trainer Ignacio Correas said, "This filly absolutely loves it here at Churchill Downs, as do I. It was a great race from her and it sets her up for a good year with the Breeders' Cup back here in November. She's improved since we got her form Argentina and I think she's just getting better."

Right: Blue Prize returns after the race. Winning jockey Jose Ortiz said, "This horse is very tactical. I let her save ground and when we started asking her to go she just took off. I'm very happy with her effort tonight and I know she'll do well in the future." 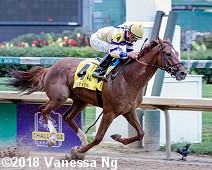 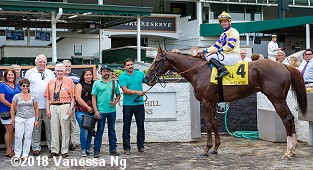 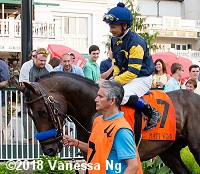 Left: King Zachary in the winner's circle. Winning jockey Robby Albarado said, "This horse keeps getting better with each start. I can't thank Dale and Mr. Conway enough for letting me ride this horse. I think we are setting ourselves up for a big year with this horse. Dale gave me a lot of confidence this week. When Corey went to the lead with Tiz Mischief I just settled and sat right off the pace. It worked perfectly." Trainer Dale Romans added, "What a race. King Zachary just keeps getting better every time we see him. I was confident entering the race that he'd run a big effort. I know Ax Man was the horse to beat but was confident with my horses."

Right: Third place finisher and beaten favorite Ax Man in the paddock before the race. Jockey Mike Smith said, "He just completely lost it. I've never seen him act like that. He was so bad. We couldn't even get the ear-things out of his ears. I don't know how he got to the gate in one piece, and then he got in there he went to tearing them up. He was kicking at the gate with both back legs. He stopped for a second when they kicked (the starting gate), then he kicked again and I got completely left." Trainer Bob Baffert added, "He was just never comfortable in there. He's not a horse that travels well, so he should be better when he gets back home." 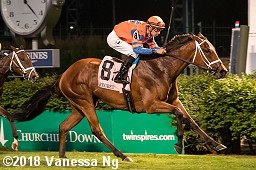 Closing out the stakes action on Saturday night a field of 13 three-year-old fillies went to post in the $100,000 Regret Stakes (G3) at 1 1/8 miles on the turf. Edgewood (G3) 6th place finisher Beyond Blame was sent off as the 7-2 favorite over 4-1 Heavenly Love, 6th in the Appalachian (G2), and 9-2 Stave, winner of 2 straight allowances.

7-1 Romantic Moment was quickest away through an opening quarter of 23.50 before 16-1 Go Noni Go took over on the clubhouse turn through fractions of 47.13 and 12:11.43 while pressed by Romantic Moment and stalked by 26-1 Finess Bere. Turning for home, jockey Florent Geroux, 5th early aboard Beyond Blame, came out 5 wide for room to gain the lead through 1 mile in 1:36.34. Kept to task by Geroux, Beyond Blame drew off to win by 1 1/2 lengths over Go Noni Go in 1:48.94. It was a nose back to late-running Heavenly Love third.
Full results chart from DRF 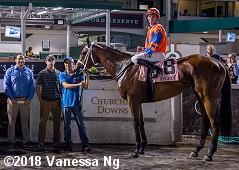 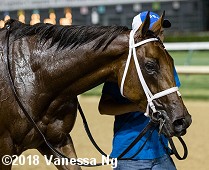 Left: Beyond Blame in the winner's circle. Trainer Brad Cox said, "If you just simply cross off her last race, she hasn't run a bad race in her life. She proved tonight she was very versatile and could have some nice races in her future this summer."

Right: Beyond Blame heads back to the barn. Jockey Florent Geroux said, "It's great to be able to perform at the top level on a big Saturday like this. She got into some trouble in her last start but tonight she settled nicely into the first turn and was able to relax just off the speed. She tried really hard down the lane once she took the lead to hold off the other horses. Credit to Brad and his entire team. It's been a great night." 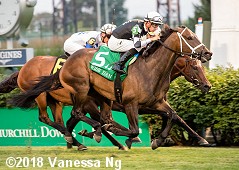 Jockey Chris Landeros sent 10-1 Mr Cub to the lead first time by through fractions of 24.70, 48.75, and 1:12.73 while pressed by World Approval and stalked by 47-1 longest shot Flatlined. Entering the stretch, Mr Cub continued to lead through 1 mile in 1:35.87 as World Approval tired. Mr. Misunderstood, 4th early under Florent Geroux after bumping with World Approval at the start, came out 3 wide for room and was all out to hold off late-running 15-2 Inspector Lynley by 1/2 a lengtgh in 1:41.83. It was a head back to Mr Cub third, while favorite World Approval checked in 6th.
Full results chart from DRF 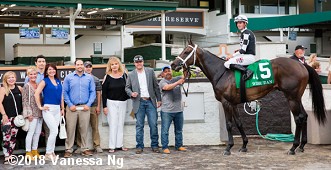 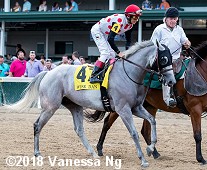 Left: Mr. Misunderstood in the winner's circle. Winning jockey Florent Geroux said, "This horse isn't the biggest horse in the world but does very well covered up behind some of the other bigger ones in front of him. When I tipped him out he really dug in. He didn't run bad in (the Maker's 46 Mile) but we knew he was better than that. He proved today he's right up there with some of the best turf horses in the country." Trainer Brad Cox added, "I think we may have rushed him a bit getting back from the Maker's 46 at Keeneland. He ran well but I think the three weeks between races was a bit too much, especially running in a Grade 1. We gave him a bit more time off and pointed for the Wise Dan and he proved he could compete with some of the top horses on the grass."

Right: Sixth place finisher and beaten favorite World Approval in the post parade. Trainer Mark Casse said, "I guess the track's a little loose. Johnny (Velazquez) said that every time he'd start to accelerate he'd kind of lose his footing. He said he's never done that before, so I don't know. We got roughed-up a little bit at the start, but he got him out of there and got him in good position. Johnny knows him better than anybody, and he said he's never struggled with a turf course like he struggled tonight. He said that every time he'd run about three or four strides, they call it ‘pitchin,' and he said that's what he kept doing. I don't know, because he handles all kinds of turf."