The highlight race of the Santa Anita winter-spring meeting is the $600,000 Santa Anita Handicap (G1) presented by San Manuel Indian Bingo and Casino, featuring the best older handicap horses on the west coast going 1 1/4 miles over the main track in Arcadia before just 17,377 fans in attendance. Intermittent showers fell during the race card, downgrading the main track to "wet-fast" for the main event, but the turf course remained firm, with temperatures in the high 50's. Breeders' Cup Dirt Mile (G1) 9th place finisher Accelerate was sent off as the 5-2 favorite in the field of 7 off his win in the San Pasqual (G2) after finishing second in the San Antonio (G2). In to challenge him included 11-4 second choice Mubtaahij, 8th in the Breeders' Cup Classic (G1) before finishing 3rd in both the Native Diver (G3) and San Pasqual, and 3-1 third choice Giant Expectations, 9th in the Pegasus World Cup (G1) after winning the San Antonio.

Jockey Mike Smith sent Mubtaahij to the lead first time by and he set fractions of 23.49, 47.99, and 1:12.32 while pressed by Accelerate and stalked by 11-1 Top of the Game. On the far turn, jockey Victor Espinoza sent Accelerate to the lead through 1 mile in 1:36.93. Turning for home, Accelerate left the field behind, opening up a 4 1/2 length lead on Mubtaahij midstretch through 9f in 1:49.19, and cruising the rest of the way to finish under wraps 5 1/2 lengths in front in 2:01.83 over the wet-fast main track. It was a long 7 lengths back to 5-1 fourth choice Fear the Cowboy third. 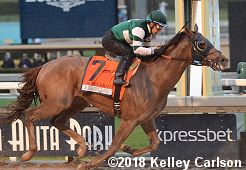 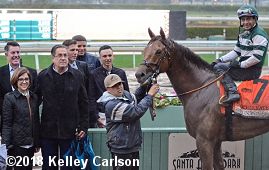 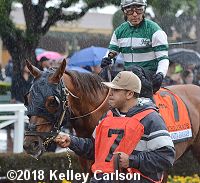 Left: Accelerate in the winner's circle. Winning owner Kosta Hronis said, "Last time I said I'd rather go 1 1/4 instead of a mile because I just don't think he's built for a mile. In his last race he proved he can settle and he can be quiet. He showed his maturity and today he showed that next step. He didn't break great, but he hasn't been breaking well lately. We had a good post out in seven and didn't get bogged down like we did last time. Victor was able to work out a trip and keep him pretty clean and I think that was the key. He made a move down the backside, wanted to get him in the race and take over, and that's what he did."

Right: Accelerate in the paddock. Winning trainer John Sadler said, "He's had some big races. He beat Arrogate twice last year, so for him to win a Group 1 here at Santa Anita at a mile and a quarter is huge. We passed up the Pegasus and Dubai to run here at home. Once Victor gets this horse in a spot, we're feeling good all the way around because we're clear. You don't want to be the one eating all the mud, so he's nice and clear and he's tracking. We don't get a lot of very wet tracks, so it's hard to say if your horse is going to love the surface today. For me, it's as good as it gets, being a California guy." 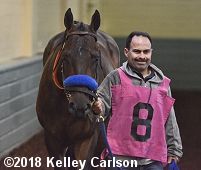 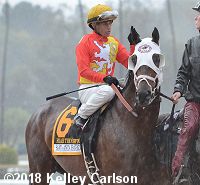 Left: Second place finisher Mubtaahij in the paddock. Jockey Mike Smith said, "There's no difference in being favored or second choice as far as how you're going to ride the race or what you're going to do. He ran very well. The winner was just double-loaded and I wasn't going to beat him today. It was his turn. I waited to make my move a little later and hopefully get second and it worked out." 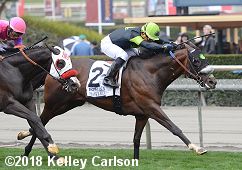 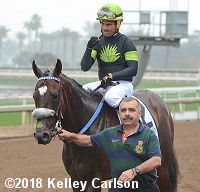 Left: Bowies Hero in the winner's circle. Winning trainer Phil d'Amato said, "Tomorrow is my (42nd) birthday but we'll celebrate it today. This horse competes every step of the way. He's steadily progressing and today he showed he can compete amongst the elite in the turf mile division. Hat's off to Corey and for helping this horse's development." Owner Mark Martinez added, "Corey had him sitting perfect and it was enough speed for him to run at. I was a little concerned with how soft the track might be but he took to it and it couldn't have been a better ride."

Right: Bowies Hero returns after the race. Winning jockey Corey Nakatani said, "It turned out perfect. Phil loved him today and he was right. This horse, when he makes the lead, he kinda grinds a little bit, so I just wanted to make sure he stayed focused. Anytime you're able to ride and win these kinds of races on a big day like this, yeah, it's really nice, especially when you're not expected to win." 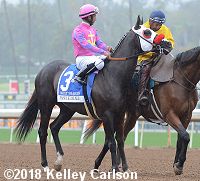 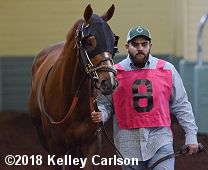 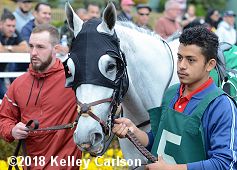 Fifth place finisher and beaten favorite World Approval in the paddock. Jockey Flavien Prat said, "No, at no point did I feel like he was going to catch up and win. I had a good trip, I had a great pace in front of me but he just didn't fire. That's it."


Kicking off the stakes action on Saturday was the $400,000 Triple Bend Stakes (G1) for older horses sprinting 7 furlongs on the main track. Malibu Stakes (G1) winner City of Light was sent off as the even-money choice in the field of 5. In to challenge him included 2-1 Captain Scotty, undefeated in 2 starts in allowance company, and 5-2 Edwards Going Left, winner of the California Cup Sprint after finishing second in the Malibu.

Jockey Victor Espinoza sent 8-1 Bobby Abu Dhabi to the lead exiting the chute and he set fractions of 22.33, 44.55, and 1:08.53 while pressed by City of Light and stalked by Edwards Going Left. At the top of the stretch, jockey Drayden Van Dyke asked City of Light for run and he easily passed Bobby Abu Dhabi inside the 1/8 pole, drawing clear late to win by 1 1/2 lengths in 1:21.35 over the fast main track. It was a long 4 1/2 lengths back to Edwards Going Left third. 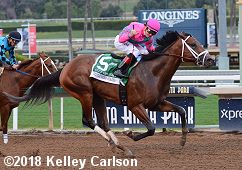 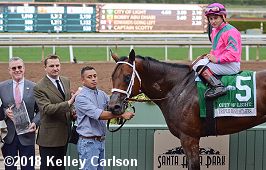 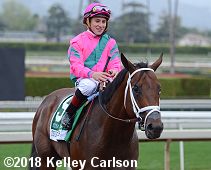 Left: Trophy presentation for the Triple Bend. Winning trainer Mike McCarthy said, "I thought the race set up just like it would opening day in the Malibu. The horse outside of us showed plenty of pace and my horse was a bit keener the first 3/16 mile than I expected. Drayden dropped his hands coming to the half-mile pole, the horse seemed to settle for him and he picked him up coming to the lane. It was a hard-fought battle; we were glad to be on the right end of it."

Right: City of Light returns after the race. Winning jockey Drayden Van Dyke said, "When you get on a roll like this, it gets your spirits up and it puts you in a good mood. I just want to keep it going. He grabbed me a little bit when he got the bit but then he relaxed again. He's just a neat horse and he's so kind. I'm very thankful to be on him." 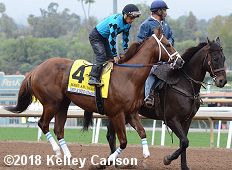 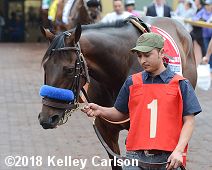 Left: Second place finisher Bobby Abu Dhabi in the post parade. Jockey Victor Espinoza said, "I was kind of surprised that everyone took back because there was so much speed in the race. When everybody took back it was good because we got in front. He was just waiting for a horse to see he kind of got lost in the front because he's never really been in the front by himself; that was the first time. Nevertheless, he still ran a great race."

Right: Third place finisher Edwards Going Left in the paddock before the race.


The $400,000 San Felipe Stakes (G2) is the major local prep for the Santa Anita Derby (G1) and is worth 50 points to the winner as part of the Kentucky Derby Championship Series. A field of 7 three-year-olds faced the starter in this 1 1/16 mile trip, with Sham (G3) winner McKinzie sent off as the even-money favorite. In to challenge him included 6-5 second choice Bolt d'Oro, 3rd in the Breeders' Cup Juvenile (G1) after winning the FrontRunner (G1), and 6-1 Kanthaka, winner of the San Vicente (G2).

Jockey Rafael Bejarano sent 27-1 Lombo to the lead and he set fractions of 23.50, 46.81, and 1:11.34 while pressed by McKinzie and stalked by 58-1 Aquila and Bolt d'Oro. Entering the lane, Lombo tired as jockey Javier Castellano sent Bolt d'Oro to gain a short lead on McKinzie (bumping at the 3/16 pole) through 1 mile in 1:36.18, setting up a duel to the line. Jockey Mike Smith aboard McKinzie outfinished Bolt d'Oro late to finish in front by a head in 1:42.71. It was a long 6 1/2 lengths back to Kanthaka third. Castellano aboard Bolt d'Oro claimed foul against Smith aboard McKinzie for interference in upper stretch. After a lengthy inquiry the stewards disqualified McKinzie and placed him second, handing the win to Bolt d'Oro. 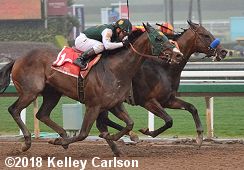 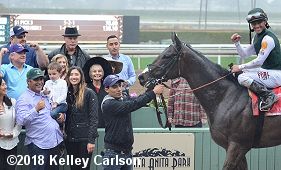 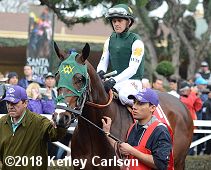 Left: Trophy presentation for the San Felipe. Winning owner-trainer Mick Ruis said, "This was a steppingstone and that's all we needed. He'll come back good. We wanted to run a good race. I don't think the fans and everybody else could have had a better finish from the two horses they thought were going to run like they expected. Bolt hadn't run in a while. I had one 3/4 work in him; this wasn't the race we were looking forward to. We're looking forward to the Santa Anita Derby and then (Kentucky Derby). In the Breeders' Cup (Juvenile), his head came down a little bit, he didn't have as much life. The horse is good right now. Hopefully, we're moving forward and he'll be at his best in a couple months. This horse has the heart of a lion."

Right: Bolt d'Oro in the paddock. Winning jockey Javier Castellano said, "He broke really well out of the gate and put me in a good spot in the race. He broke and shot out of the gate and put me where I wanted to be. I didn't want to be too far back and I think it was a perfect ride for him. I was concerned a little bit in the last part of the race, especially around the last sixteenth. I think that my horse tried to hold back to force inside and we had some contact. They say he tried to intimidate my horse and that is why I couldn't get past him. I wish it would've just been the two horses running straight in the race. We were the best two horses in the race. I just want to see who the better horse is." 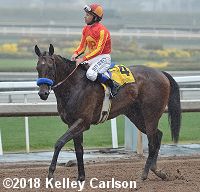 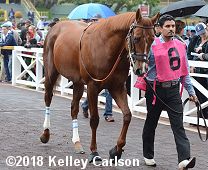 Left: Second place finisher (disqualified from first) and beaten favorite McKinzie returns after the race. Trainer Bob Baffert said, "That's some bull... Javier had a better story, I guess. I'm shocked, after the way he hit us at the top of the stretch. I don't know what they're looking at, but apparently he talked them into it. That's why they should never talk to the jockeys, just watch it themselves." Jockey Mike Smith added, "That last hit where he hit me in the ass, he turned me out. I was just trying to ride my own race and he was on top of me. At the 1/4, after the 1/4 pole and through the lane he hit me and turned me out. I mean he's got the whole racetrack and he's on top of me on the fence. Anytime it takes that long and you're the one who won, you certainly don't like it. I didn't feel that I did anything. I was forced out. He hit me hard behind and it took me out. It turns you out."

Right: Third place finisher Kanthaka in the paddock before the race. The Jerry Hollendorfer trainee improved his record to 2 wins, 0 seconds and 1 third in 4 starts, earning $201,440 for owner West Point Thoroughbreds. 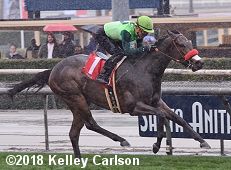 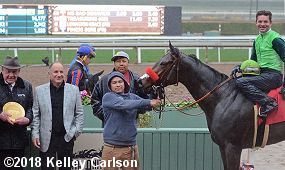 The Jerry Hollendorfer trainee improved her record to a perfect 4 wins in 4 starts, earning $258,860 for owner-breeder Joe Turner.