The $250,000 Sam F. Davis Stakes (G3) is the main local prep for the Tampa Bay Derby (G2) at Tampa Bay Downs, and is a points-scoring event in the Road to the Kentucky Derby. Conditions were excellent, with partly cloudy skies and temperatures in the low 80's, the main track rated fast and the turf course firm. Breeders' Cup Juvenile Turf (G1) fourth place finisher Catholic Boy was sent off as the 7-10 favorite in the field of 6 off his win in the Remsen (G2). In to challenge him included 2-1 second choice Vino Rosso, undefeated in 2 starts and making his stakes debut, and 5-1 third choice Hollywood Star, 6th in the Breeders' Cup Juvenile (G1).

Jockey Jose Lezcano sent 10-1 Flamaway to the front first time by and he set fractions of 24.18, 47.73, and 1:11.25 while pressed by 21-1 Septimius Severus and stalked by Catholic Boy. Entering the lane, Catholic Boy moved up to challenge Flameaway through 1 mile in 1:36.06, however Flameaway fought him off late to win by 1/2 a length in a new stakes record time of 1:42.44, shaving 1/100 second off McCraken's record set last year. It was another 3/4 length back to Vino Rosso third. 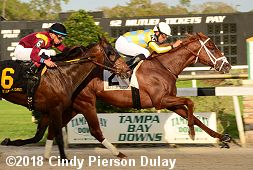 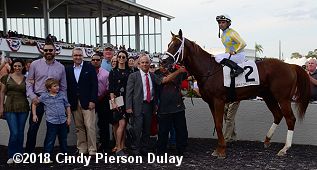 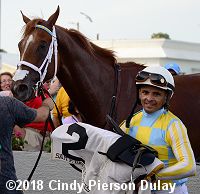 Left: Flameaway in the winner's circle. Winning trainer Mark Casse said, "He's a fighter. If you've ever watched him, you've seen that. With the track playing a little fast today, I told Jose he was going to like this track. The one thing about him is, if he gets in a battle, he's going to win the battle. As long as the track is fairly firm, I think he'll run on anything. I would say there is a good chance (to return for the Tampa Bay Derby), but it's something I have to talk to Mr. (John) Oxley about. I would also say I was kind of wishy-washy about trying him on dirt, and Mr. Oxley said 'Can we do it one more time?' He is the boss, so I said 'Of course.'"

Right: Flameaway after unsaddling. Jockey Jose Lezcano said, "He is a very nice horse who I think is improving with every race. He's very quiet, not hyper at all, and he gives you what you ask for. I think he will be a nice horse in the future." 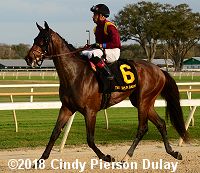 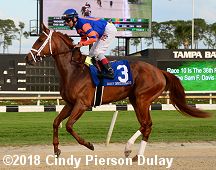 Left: Second place finisher and beaten favorite Catholic Boy returns after the race. Trainer Jonathan Thomas said, "I really need to watch the race again, but I thought it was a big effort giving 6 pounds. I'm happy because it was a good effort. I just need to see it again and digest the race." 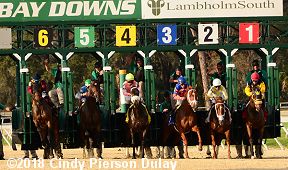 The horses break from the gate for the Sam F. Davis Stakes. 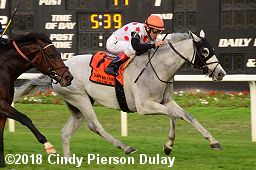 Closing out the stakes action on Saturday was the $175,000 Tampa Bay Stakes (G3) for older horses going 1 1/16 miles on the turf. As expected, 2017 Champion Male Turf Horse World Approval was sent off as the 1-5 favorite in the field of 9, off his wins in the Woodbine Mile (G1), and Breeders' Cup Mile (G1). In to challenge him included 8-1 second choice Fire Away, winne of the Artie Schiller at Aqueduct, and 12-1 third choice Western Reserve, second in an allowance after finishing 7th in the Tropical Turf (G3).

Western Reserve and 48-1 Le Ken dueled for the early lead down the chute and around the clubhouse turn through fractions of 23.25, 46.66. and 1:10.32 while stalked by World Approval. On the apex of the far turn, 42-1 Doctor Mounty fell, unseating jockey Antonio Gallardo, causing 123-1 longest shot Cheyenne's Colonel to trip and fall, unseating Manoel Cruz. At the top of the lane, jockey John Velazquez moved World Approval out for room, and the champion easily took over through 1 mile in 1:34.74, holding off 12-1 Forge by 1/2 a length in 1:40.66. It was a long 4 lengths back to Fire Away third. The fallen horses got up and appeared unhurt, caught by outriders. Cruz was taken to hospital as a precaution, while Gallardo was able to walk back to the jockey's room but did not ride in the last race. 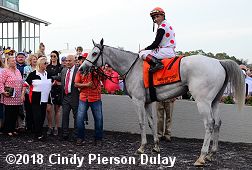 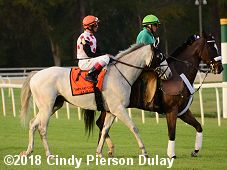 Left: World Approval in the winner's circle. Winning trainer Mark Casse said, "I feel bad for the two horses that fell and those jockeys. (World Approval) has been better than he was today, but hopefully this will set a nice foundation for him this year. He's a funny horse – he is not going to let you by." World Approval is expected to go next in the $5 million Dubai Turf (G1) at Meydan.

Right: World Approval crosses the turf course to the starting gate. Winning jockey John Velazquez said, "He was coming off a long layoff and sometimes they need a race, but he's still a true champion and he put everybody away down the lane. I think when we passed a mile it was getting a little long for him with the layoff and (the extra 1/16) hit him right in the head a little bit." 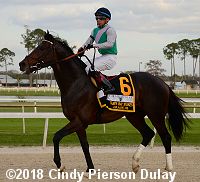 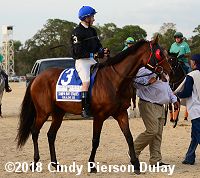 Right: Third place finisher Fire Away heads out for the post parade. The Shug McGaughey trainee improved his record to 5 wins, 4 seconds, and 4 thirds in 20 starts, earning $388,397 for owner-breeder Phipps Stable. 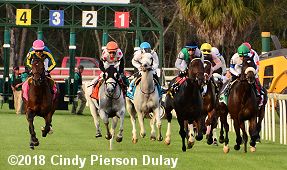 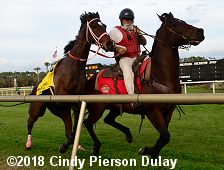 Left: Shortly after the start of the Tampa Bay Stakes.

Right: Cheyenne's Colonel tried to run through the outside rail near the finish line after dumping his jockey on the turn when he fell over Doctor Mounty. 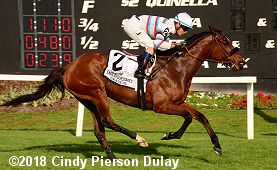 The distaff counterpart to the Tampa Bay Stakes is the $175,000 Lambholm South Endeavour Stakes (G3), featuring a field of 7 older fillies and mares going 1 1/16 miles on the turf. La Coronel was sent off as the even-money favorite off her win in the Queen Elizabeth II Cup (G1) at Keeneland in October. In to challenge her included 7-5 second choice Dona Bruja, 4th in the First lady atfer finishing 2nd in the Beverly D (G1), and 5-1 third choice Truly Together, 2nd in an allowance last out.

Jockey Jose Ortiz sent Dona Bruja to a clear lead exiting the chute through fractions of 23.92, 48.02, and 1:11.05 while pressed by 86-1 longest shot Josdesanimaux and stalked by 14-1 Viva Vegas. Entering the lane, Dona Bruja opened up by 3 1/2 lengths through 1 mile in 1:34.74. Favorite La Coronel, 5th early under Jose Lezcano, put in a late inside rally to no avail as Dona Bruja cruised to a 4 length win in 1:40.92. It was a length back to late-running Truly Together third. 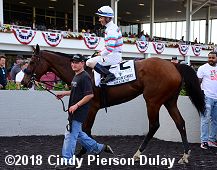 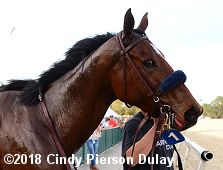 Left: Dona Bruja in the winner's circle. Winning trainer Ignacio Correas said, "I think that (going to the lead from the start) was Bruja's plan, not our plan. I guess she does what she wants. She has so much talent. She's had a couple of unlucky trips, but hopefully this will be her year. I couldn't believe we were on the lead, but she broke sharp and she was fresh because she hasn't raced in four months. I guess that's why she went to the lead. She's amazing, and I'm the luckiest guy to have her in my barn."

Right: Dona Bruja heads back to the barn. Winning jockey Jose Ortiz said, "Ignacio told me to keep her relaxed and don't change her style and let La Coronel go, and hopefully somebody would go after her. But (Dona Bruja) broke really good. I was a bit nervous going into the first turn on the lead, but she was pulling me, I guess because she was so fresh. I think she is going to move forward off this." 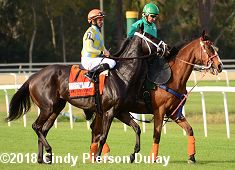 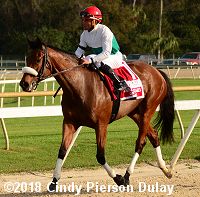 Left: Second place finisher and beaten favorite La Coronel crosses the turf course to the starting gate. Trainer Mark Casse said, "Our filly broke a little slow, if not, they probably would have been head-to-head. She maybe was a little flat, but this is the beginning of the year. It's supposed to get better from here."

Right: Third place finisher Truly Together returns after the race. The Michael Matz trainee improved her record to 3 wins, 1 second, and 2 thirds in 6 starts, earning $119,760 for owner-breeder Augustin Stable. 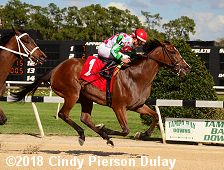 Kicking off the stakes quartet was the $150,000 Suncoast Stakes for 3-year-old fillies going 1 mile 40 yards on the main track and is a points-scoring event in the Road to the Kentucky Oaks. Tempted (G3) winner Daisy was sent off as the 11-10 choice off her fourth place finish in the Demoiselle (G2). In to challenge her included 2-1 second choice Blonde Bomber, third in the Breeders' Cup Juvenile Fillies (G1) but 4th in the Silverbulletday, and 4-1 third choice Belles Orb, an allowance winner last out. 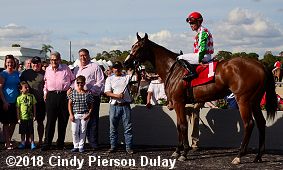 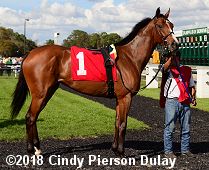 Left: C. S. Incharge in the winner's circle. The 8-1 fourth choice pressed the pace under Joel Rosario then took over inside the 1/16 pole for the 3/4 length win. 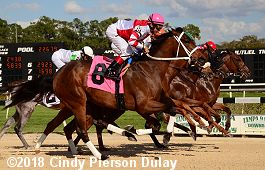 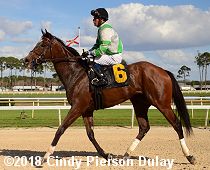