With the Breeders' Cup World Championships just 5 weeks away, horses hoping to compete in the main event are running their final prep races over the next 2 weeks, preferably in Breeders' Cup Challenge Series "Win and You're In" events, where the winner earns a guaranteed spot in the corresponding Championship race with travel expenses covered. Santa Anita Park's major preps were run on Saturday, under sunny skies and tamperatures in the mid 80's, with 16,592 fans in attendance at the historic Arcadia oval.

Winning trainer Bob Baffert said, "His last two works really impressed us. I just threw him in here and he has the class. He's proven. Even last year, those last few races in New York were pretty strong. He needed today. He got a little tired there at the end. He's good to have in the barn. It looks like he'll be in the Breeders' Cup Classic." Jockey Drayden Van Dyke added, "The trip was great. I was really keeping my eye on Cupid and taking my cue from him. I was placed where I wanted to be and didn't start asking him until late. But when I asked him, he responded." 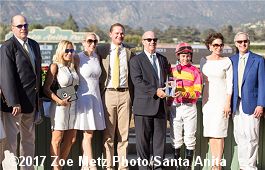 Trophy presentation for the Rodeo Drive in the winner's circle. Winning trainer Richard Mandella said, " I was impressed that she settled off the leader and that she had such a good finish. I felt better about it at the 1/4 pole. When she exploded away from there, you could tell it was working. But she's run so well on the lead, I wasn't looking to change it, but Baffert's horse took the place we were thinking of." Jockey Flavien Prat added, "Three Grade 1's, that's the first time for me. My filly was nice and relaxed. When Nakatani (Corey, aboard Goodyearforroses)) came to me at the 3/8, my filly grabbed the bit, but she stayed relaxed. I was a little surprised the other filly stopped like she did, but it worked out good for us. My filly kept running." 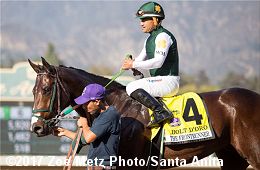 Bolt d'Oro heads to the winner's circle. Winning owner-trainer Mick Ruis said, "I just didn't want to rush him out in his 6 1/2 furlong debut or his 7 furlong race. Our goal was this race and the Breeders' Cup, and then give him a chance to grow up. Hopefully what dreams are made of is what this guy might be able to get us to. That's why we tried to stay on course and not get too excited about the Grade I at Del Mar. That was all on his natural talent." Jockey Corey Nakatani added, "I was more impressed when I watched the replay. I really liked the way he did it. He's confident wherever he is at, he is a special animal. Mick gave me the instructions and the horse did the rest. I'm looking forward to the Breeders' Cup as well as the first Saturday in May in Kentucky."

Winning trainer Simon Callaghan said, "I just like the way she sat off horses and relaxed really well. That's the key to getting these longer distances. We know she's got speed, and she's proven it in these two other races, but today she showed she relaxes, and that makes everyone's job easier." Jockey Flavien Prat added, "She's learned to relax, so that's great. She broke well, she sat off the pace, dropped the bit and relaxed well today. When I made my move, she was all there. Simon told me to break and just wait and see what the other speed was going to do but I kind of rode her the same as I did in the Debutante." 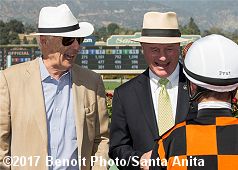 Owner Martin Wygod and trainer Richard Mandella in the winner's circle. Wygod said, "It sure does feel good (to have her back in form), but she had good excuses in her last two races. I never lost confidence in her, and Richard never lost confidence in her, either. It always makes you feel good going into whatever we decide we want to do with her. It didn't take much out of her – she was hardly blowing, and you could see he was having difficulty pulling her up." Trainer Richard Mandella added, "She's kind of gone south, mentally, on us. We had to get through some hard times, and we did. She responded. It was a lot of schooling. This was a relief. I was worried something would go wrong again, but it went right. The Distaff is the goal. I couldn't ask for more than what we had today."