The $500,000 Gold Cup at Santa Anita (G1) at Santa Anita Park features the best older horses on the west coast. Formerly known as the Hollywood Gold Cup, after the Inglewood track closed its doors for good at the end of 2013 many of its stakes races were picked up by the other Southern California tracks. A field of 7 older horses went to post in this 1 1/4 mile main track feature under sunny skies and temperatures in the high 70's before the 17,634 fans in attendance. Last year's Travers (G1) runner-up American Freedom was sent off as the 8-5 favorite off his fourth place finish in the Alysheba (G2). In to challenge him included 5-2 second choice Midnight Storm, unraced since 8th in the Pennsylvania Derby (G2), and 7-2 third choice Follow Me Crev, second in the Californian (G2) after finishing third in the Santa Anita Handicap (G1).

74-1 Prime Attraction and favorite American Freedom dueled on the front end through fractions of 23.04, 46.52, and 1:10.62 while stalked by Midnight Storm and 7-1 fourth choice Cupid. Entering the lane, Midnight Storm gained a short lead through 1 mile in 1:35.37. Jockey Rafael Bejarano asked Cupid for run and he quickly opened up a 2 length lead midstretch through 9f in 1:47.96. Follow Me Crev attempted to rally from 5th but Cupid drew off late to win by 3 1/4 lengths in 2:00.89 over the fast main track. It was another 2 3/4 lengths back to 12-1 Hard Aces third, while American Freedom tired to finish 5th. 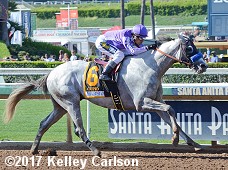 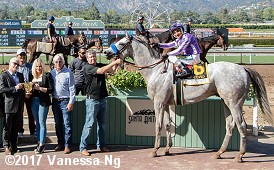 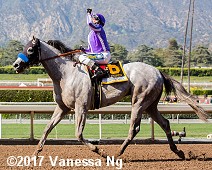 Left: Cupid in the winner's circle. Winning trainer Bob Baffert said, "He's going to get better with age. We should have some fun with him this summer. Off that long layoff, his class showed up and he's been working so well. He's really filled out. He's always been a beautiful horse. As a matter of fact, I have a two year old that just came in and they could be brothers, they look the same. Hopefully, he'll be as good. We took the back roads with Cupid last year and made over a million dollars. Coolmore (owner) has been great and they kept him in training. They asked me if I thought he'd get better and I thought he should. We freshened him up and here we are."

Right: Cupid returns after the race. 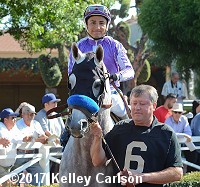 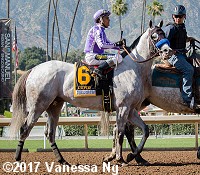 Left: Cupid in the paddock before the race.

Right: Cupid in the post parade. Winning jockey Rafael Bejarano said, "My horse broke really well. I put a little pressure on at the half-mile pole. When I got to the stretch and was in the clear I thought I had a lot of horse and the race was over." 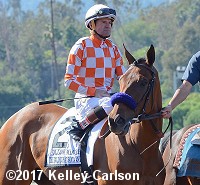 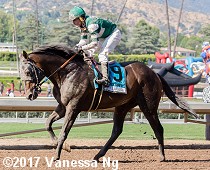 Left: Second place finisher Follow Me Crev in the post parade. Jockey Kent Desormeaux said, "It was just like the Breeders' Cup – I was taken out of the race in the first jump. It was a phenomenal effort by the Wilsons' horse because he took a punch and body blow the first jump. Ridiculous. A mile and a quarter. These guys can't drive. I would have been a couple of lengths behind him, and instead I was 20 back. My horse has more speed than where I was today." 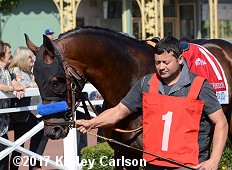 Fifth place finisher and beaten favorite American Freedom in the paddock before the race. The Bob Baffert trainee has a record of 3 wins, 2 seconds, and 0 thirds in 8 starts, earning $705,100 for owners Gary and Mary West.


The $300,000 Gamely Stakes (G1) featured a field of 5 odler fillies and mares going 1 1/8 miles on the turf. Breeders' Cup Filly and Mare Turf (G1) runner-up Lady Eli was sent off as the 3-5 favorite off her second place finish in the Jenny Wiley (G1). In to challenge her included 8-5 second choice Avenge, unraced since third in the Breeders' Cup Filly and Mare Turf, and 8-1 third choice Goodyearforroses, fifth in the Jenny Wiley.

Jockey Flavien Prat sent Avenge to the lead first time by through fractions of 23.23, 46.46, and 1:09.69 while pressed by Lady Eli and stalked by Goodyearforroses. Entering the lane jockey Irad Ortiz Jr. sent Lady Eli to the front and she easily took over at the 3/16 through 1 mile in 1:33.37. Goodyearforroses attemped to close late but Lady Eli held her off by 1/2 a length in 1:45.29 over the firm going. It was a long 3 1/4 lengths back to Avenge third. 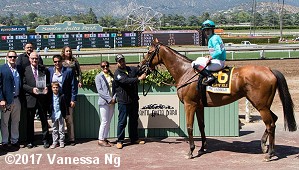 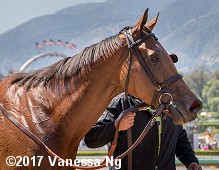 Left: Lady Eli in the winner's circle. Cherie DeVaux, assistant to winning trainer Chad Brown said, "Irad didn't want him to take too much hold of her because he didn't want her to have too much to do. He was concerned about Avenge getting an easy lead. Because of everything she's been through, it's way more emotional when she runs. This is the most emotional I've ever gotten with any horse. Her tenacity is what makes her great. It was really emotional for me today because this is the first time I've saddled her. The Breeders' Cup (Filly and Mare Turf) is the ultimate objective."

Right: Lady Eli heads back to the barn. Winning jockey Irad Ortiz Jr. said, "I just tried to follow the speed, which was Avenge today. I tried to follow as close as possible and it worked out. It's always a nice trip when I get to come out here." Co-owner Jay Hanley added, "The fact that she can come back and do this (after battling laminitis) is absolutely amazing. All we can do as owners is try to be good stewards and that's our job. We try to make good decisions but for the most part we just try to put our faith in Chad and his team. This is all gravy to us. We're playing with house money now. I feel like we wanted to bring her back, mostly for the fans. It's to showcase her for the fans. The fans that are here today, I'm sure many are here to see her." 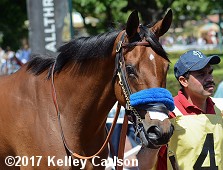 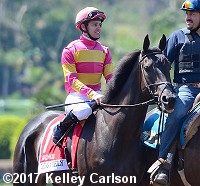 Left: Second place finisher Goodyearforroses in the paddock before the race. Jockey Corey Nakatani said, "She ran gamely. She gave me every indication and every chance to do it. She ran a great race--she ran dynamite. It was a big effort for this horse today to try to run down a filly like this."


The $200,000 Monrovia Stakes (G2) featured a field of 8 older fillies and mares contesting the "about" 6 1/2 furlong trip over the downhill turf chute. irish O'Brien Stakes winner Enola Gray was sent off as the 6-5 favorite over 8-5 second choice Illuminant, 7th in the Jenny Wiley (G1), and 8-1 third choice Juno, third in the Royal Heroine (G2). 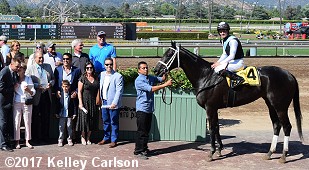 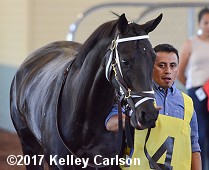 Left: Illuminant in the winner's circle. Winning trainer Mike McCarthy said, "I thought she was very good when she came to us. It took us a little while to kind of get her lined out and she battled a few things but once we were able to get her on track, she took us there. This is the first time that she's actually really laid off the pace, going down the hill, so I was a little nervous to say the least. But once she got going across the dirt, I thought she had it. Going across the dirt I could see her quicken up and liven."

Right: Illuminant in the paddock. Winning jockey Flavien Prat said, "That was a dream trip. She broke well and she's just not fast enough to follow that fast pace. Crossing the dirt, I was low and everything opened up down by the rail. It was great." 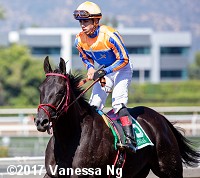 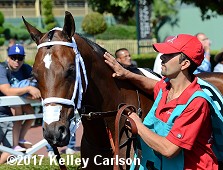 Left: Second place finisher Coniah returns after the race. The Billy Morey trainee improved her record to 3 wins, 4 seconds, and 3 thirds in 18 starts, earning $215,365 for owner-breeder James and Tammy McKenney.

Right: Third place finisher Anita Partner in the paddock. Jockey Brice Blanc said, "She ran awesome for her first time against those types of horses. It was a pretty good step up (in class). She ran her race. She was a tad loose at the top of the hill – she struggled early, so I got a little farther back than I would have liked. Once she crossed the dirt, she really gave me everything she had." 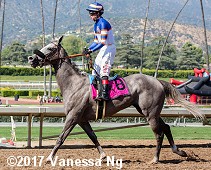 Fifth place finisher and beaten favorite Enola Gray returns after the race. The Phil D'Amato trainee has a record of 6 wins, 2 seconds, and 1 third in 10 starts, earning $513,100 for owner-breeder Nick Alexander.


Kicking off the stakes quartet on Saturday was the $150,000 Daytona Stakes (G3), with a short field of just 4 older horses (after 2 scratches) also taking the "about" 6 1/2 furlong downhill turf trip. Siren Lure Stakes winner Stormy Liberal was the 1-2 favorite over 9-5 Ambitious Brew, 13th in last year's Breeders' Cup Turf Sprint (G1), 8-1 Home Run Kitten, unraced since 5th in the Bing Crosby (G1), and 11-1 Blackjackcat, 10th in an allowance.

Blackjackcat was quickest away through an opening quarter of 22.40 before Ambitious Brew gained the lead at the dirt track crossover through a half in 44.15. Stormy Liberal, who pressed the pace in 2nd under Norberto Arroyo Jr. gained a short lead on Ambitious Brew midstretch through 3/4 in 1:06.25, and outfinished him to win by a neck in 1:12.43. It was another 1 1/4 length back to Blackjackcat third, and 1 1/4 more to Home Run Kitten who trailed throughout. 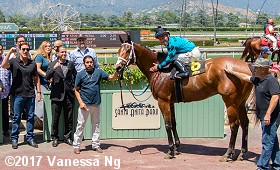 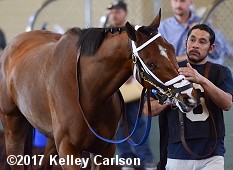 Left: Stormy Liberal in the winner's circle. Winning owner Gary Hartunian said, "David Lanzman suggested we claim this horse (for $40,000 six starts back on Oct. 16) and we've just been rolling on the good times ever since. He's found his niche coming down the hill, that's for sure. Norberto had a good hold of him; he's gonna give me a heart attack making it that close! It's a great day and Santa Anita is the greatest place in the world."

Right: Stormy Liberal in the paddock. Winning jockey Norberto Arroyo Jr. said, "With him being the only speed in the race today I was afraid they'd get the jump on me. It worked out well and my horse put himself right into the race. I had them from the get go and I knew I had more horse than him the whole time. They might have given me more trouble if we were running another 1/16 mile. I felt (Ambitious Brew) coming back a little but I realized it was my horse slowing down, waiting. I could feel it. I saw the wire and knew he wouldn't have enough time to get to us. 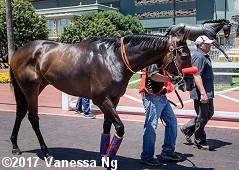 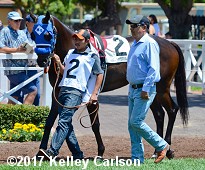 Left: Second place finisher Ambitious Brew heads to the paddock before the race. Jockey Mike Smith said, "I didn't want to be (on the lead), but I absolutely expected to be. I tried to let the other horse take the lead, but going 23 (seconds) down the hill, that ain't going to happen. If you do that, I have to go to the lead. It is what it is. He ran great. He really ran a great race, and that's a good horse that beat us."

Right: Third place finisher Blackjackcat in the paddock. The Mark Glatt trainee improved his record to 2 wins, 0 seconds, and 4 thirds in 10 starts, earning $151,370 for owner-breeder Al and Saundra Kirkwood.