The Final Day of Racing at Hollywood Park

Sunday December 22 marked the end of an era, as Hollywood Park in Inglewood, California hosted its final live races after 75 years of operation, with the site to be redeveloped into commercial and residential uses in the new year. 13,283 fans came out to say goodbye to the track that was home to Swaps, Native Diver, and more recently Zenyatta, under clear skies and temperatures in the low 60's. 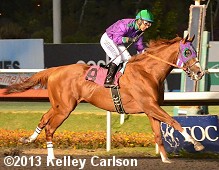 The feature race on the card and the last stakes race to be run at Hollywood was the $200,000 King Glorious Stakes, for California-bred juveniles sprinting 7 furlongs over the synthetic Cushion Track. California Chrome was sent off as the 2-1 favorite in the field of 10 over 5-2 Aotearoa and 3-1 Pray Hard. Pray Hard was sent to the lead by jockey Rafael Bejarano and he set fractions of 22.53 and 45.75 while pressed by 36-1 Convoy and 26-1 Smoove It. Entering the stretch, California Chrome, who stalked the pacesetters in fourth early, came out 4 wide and easily took over the lead at the 3/16 marker, and drew off to win by 6 1/4 lengths over late-running 5-1 fourth choice Life is a Joy in 1:22.12. It was just 1/2 a length back to Pray Hard third.

Winning trainer Art Sherman added, "It brings back a lot of memories for me. It's a special thing to be able to win here at Hollywood Park. I started here as a young kid. Rode my first race here when I was 18 (in 1955). Going back through the years, we had a lot of fun here with the big crowds and great horses.

It's fitting for me, but I feel very sad. This horse was training excellent for this race and he loves this track. This is the only place I've trained him. He's a nice colt, he just needs to grow up now. I think you'll see his best races as a 3-year-old." 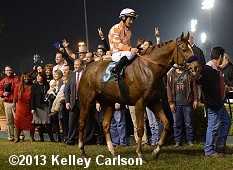 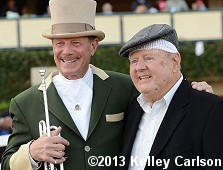 Left: Woodmans Luck with Corey Nakatani aboard in the final winner's circle celebration ever at Betfair Hollywood Park. The final race at Hollywood Park, run immediately after the King Glorious, was the $57,750 Auld Lang Syne Purse, a starter allowance at 1 1/16 miles on the turf, with a maximum field of 12 older horses in the gate. Jockey Martin Garcia aboard 10-1 Anythingscookin led the early stages through fractons of 23.17, 46.79, and 1:10.94 as track announcer Vic Stauffer listed some of the many greats who were stabled on the backstretch, from Swaps to Zenyatta.

Winning jockey Corey Nakatani said, "Well, I made history. I won the last race and got the last set of days (3-day suspension) at Hollywood Park. Kind of bittersweet. That was really emotional. It's hard to really say that much. This has always been such a great place to be. After winning a bunch of races here, it's hard to see it go. It's pretty sad."

Right: Buglar Jay Cohen poses with actor Dick Van Patten (most famous for his role in Eight is Enough) after Van Patten's horse Tanquerray won the 3rd race on the final day at Hollywood Park. 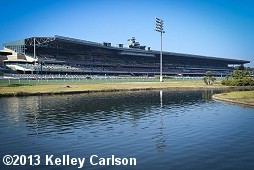 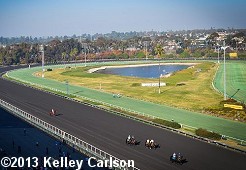 Left: A view of the grandstand at Hollywood Park. Jockey Victor Espinoza, who won the final stakes aboard California Chrome, said, "It's fun to win the last stakes here. One extra memory of Hollywood Park. I've had a lot of ups and downs here, but this is where I started. When I moved to California, this is where I won my first race. I've won a lot of big races at this track. In a way it's sad, but you have to move on in life. For me, the most important thing with this horse was the break. We came out well and he just took me around. I didn't have to do much. I just moved my hands a little bit at the 1/2 mile and I felt the power."

Right: Looking out at the track from the stands to the left at Betfair Hollywood Park. Trainer Vladimir Cerin, who won the final race of the card with Woodmans Luck, said, "When they were coming down the stretch, all I could think of is how sad that it was over. I didn't think he could win from where he was. Nakatani has given us some fantastic rides this meet. I think this is the second photo finish he's won for us like this. It's almost hard to enjoy the win when you think this is the last race at this race track. When I started training here, I think it took me a year to win my first race and to have it end like this just seems surreal." 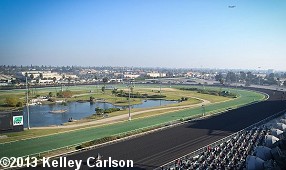 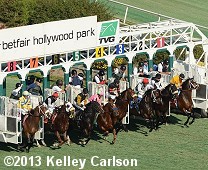 Left: Looking out at the track from the stands to the right at Betfair Hollywood Park. Jockey Rafael Bejarano, who finished third in the last 2 races of the meet but wrapped up the last riding title in Hollywood Park history with four wins on the card, said, "It feels great to win the last title. It means a lot to me. When I came back to the winner's circle, I could hear everyone cheering and I was just so happy."

Right: The horses break from the gate on the final day of racing at Betfair Hollywood Park. Hollywood Park opened on June 10, 1938, and had some of the best horses of all time race there including Citation, Seabiscuit, Seattle Slew, Swaps, and Zenyatta. They were the host of the inaugural Breeders' Cup in 1984 as well as in 1987 and 1997. 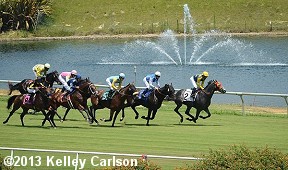 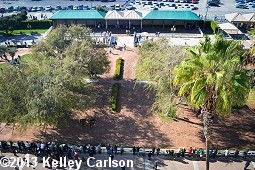 Left: The horses race down the turf course on the final day of racing at Betfair Hollywood Park. On May 9, 2013 in a letter to employees, Hollywood Park president F. Jack Liebau announced that the track would be closing at the end of their fall racing season in 2013. In the letter, Liebau stated that the 260 acres on which the track sits "now simply has a higher and better use," and that "in the absence of a favorable change in racing's business model, the ultimate development of the Hollywood property was inevitable." It was expected that the track will be demolished and replaced by housing units, parkland and an entertainment complex, while the casino will be renovated. Hollywood Park's racing dates from 2014 onward will be transferred to Santa Anita, Los Alamitos and Del Mar. Some of the track's contents will be used by Los Alamitos which is being renovated to allow for more Thoroughbred racing, however most will be sold at an auction on January 24.

Right: An overhead view of the paddock at Betfair Hollywood Park. When Hollywood Park opening in 1938 Harry Warner of Warner Brothers was the chairman, and its 600 shareholders included many Hollywood stars. Harry Warner, Al Jolson and Raoul Walsh were members of the founding Board of Directors and Mervyn LeRoy was a director from 1941 until his death in 1987. 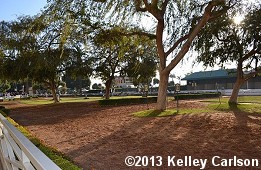 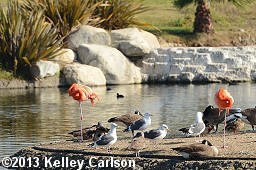 Left: Looking across the paddock at Betfair Hollywood Park. Hollywood Park closed from 1942 to 1944 due to World War II, where it was used as a storage facility. In 1949, the grandstand and clubhouse were destroyed by a fire and the rebuilt facility reopened in 1950. In 1984, the race track was extended from 1 mile to 1 1/8 mile prior to the first Breeders Cup card. In 1986, the turf course was similarly expanded from just over 7/8 mile to 1 mile 145 feet.

Right: Some of the birds in the infield at Betfair Hollywood Park. Two large lakes, linked by a canal, were dredged for the 1991 Autumn Meeting as Hollywood Park revived its “Lakes and Flowers” image. The lakes hold 5-million gallons of water and are encompassed by almost one mile of shoreline. 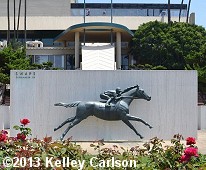 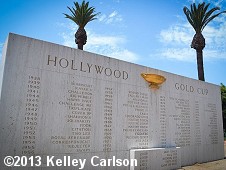 Left: The Swaps statue at Betfair Hollywood Park. The bronze statue of the great California-bred Kentucky Derby winner Swaps with jockey Bill Shoemaker up was located in Clubhouse entrance gardens. The design and setting were created by Millard Sheets and it was sculpted by Albert Stewart. It was dedicated on July 1, 1958. Swaps set four Hollywood Park track records, three of them world marks, and seasonal money-won record. He won his first race, first stakes and nine career stakes at Hollywood Park. 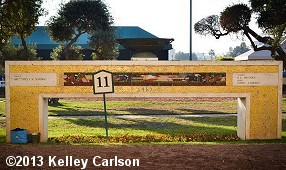 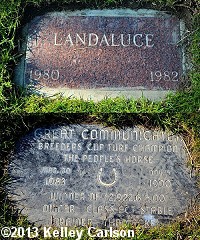 Left: Native Diver's grave in the paddock at Betfair Hollywood Park. A 20 foot long monument in the Garden Paddock marks the burial place of California-bred Native Diver. He was a three time winner of the Hollywood Gold Cup and California's first winner of $1 million dollars. The ceramic tile monument was designed and painted by Millard Sheets and depicts Native Diver's successive Gold Cup triumphs from 1965-67. The monument was erected after his sudden death from colic complications in 1967 and was dedicated on April 11, 1969. Native Diver's remains will be moved to Del Mar. The link will take you to an article with a photo of his bones as they recover them.

Right: The graves of Landaluce and Great Communicator at Betfair Hollywood Park. Landaluce was undefeated in 5 starts at age 2 and made her debut at Hollywood Park. On July 10, 1982, Landaluce won the 6-furlong Hollywood Lassie by 21 lengths in 1:08. Her margin of victory remains the largest ever run in any race by a 2-year-old at Hollywood Park. Her time is said to be the fastest clocking ever for a juvenile filly in a one-turn, 6-furlong race. On November 22, Landaluce became ill with Colitis X, a disease that nearly killed her sire Seattle Slew. She steadily weakened from the blood clots formed by a severe bacterial invasion and died with her head in trainer D. Wayne Lukas' arms on December 11, 1982. Her remains were to be relocated to Spendthrift Farm in Kentucky where she was bred. There is video of her burial here.

Great Communicator won 1988 Breeders' Cup Turf and the Hollywood Turf Cup twice. At age 7, he suffered a catastrophic breakdown in the 1990 Carleton F. Burke Handicap at Santa Anita Park and had to be euthanized. His remains were claimed by his trainer who hoped to move him to Santa Anita Park or Del Mar.