The feature race on Saturday at Del Mar's summer meeting was the $200,000 Yellow Ribbon Handicap (G2) for older fillies and mares going 1 1/16 miles over the Jimmy Durante turf course. Conditions were excellent at the seaside oval with clear skies and temperatures in the low 70's. Avenge was sent off as the 9-10 favorite in the field of 7 off third place finishes in the Breeders' Cup Filly and Mare Turf (G1) and the Gamely (G1), both at Santa Anita. In to challenge her included 2-1 second choice Cambodia, winner of the Gallorette (G3), and 9-1 third choice Hillhouse High, 6th in the Churchill Distaff Turf Mile (G2). 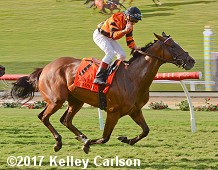 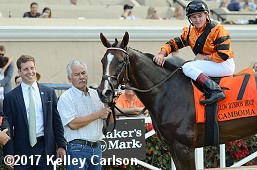 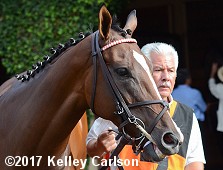 Left: Cambodia in the winner's circle. Winning owner-breeder Don Robinson said, "I've had this filly's entire family, it's the ultimate breeder's reward. I've never had a horse of my own of this quality. Thank you (trainer) Tom Proctor; he's the horseman's horseman and this is just a thrill. This is the biggest thrill of my life. I came here in 1966 and walked hots for Charlie Whittingham. I came back when Zenyatta won the Clement Hirsch. This is only my third visit and it's an amazing thrill to come here and win this race."

Right: Cambodia in the paddock. Winning jockey Drayden Van Dyke said, "The key for her is to get her to relax. Today she did it beautifully. So different than when I worked her; she's all keyed up. But she was just fine today. Could she run on? If she relaxes, I think she can do anything. A very good race for her today." 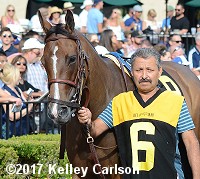 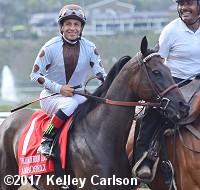 Left: Second place finisher Pretty Girl in the paddock before the race. Jockey Mike Smith said, "I rode her like I wanted to win. I took all the chances I could. But she didn't win. Maybe I should have done something different. But she ran well.

Right: Third place finisher Amboseli in the post paradeS. Jockey Victor Espinoza said, "She really came running. We were last and she came on very well. It's a while since she ran, so this will probably help her. And the farther the better for her." 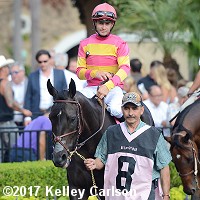 Sixth place finisher and beaten favorite Avenge in the paddock before the race. Jockey Flavien Prat said, "She was right there, then she just flattened out."


The co-feature on Saturday was the $200,000 Sorrento Stakes (G2) featuring a field of 7 two-year-old fillies sprinting 6 1/2 furlongs on the main track. Landaluce Stakes winner Surrender Now was the 11-10 favorite over 7-5 Diamondsandpearls, a debut winner at Santa Anita on July 2, and 4-1 Spectator, winner of her debut at Santa Anita on June 23.

Surrender Now was quickest away through an opening quarter of 21.93 before Spectator took over on the far turn through a half in 45.05. Under confident handling by Jamie Theriot, Spectator opened up a 2 1/2 length lead midstretch through 3/4 in 1:11.08, and drew off to win by 5 1/4 lengths over late-running 17-1 Dancing Belle in 1:17.66 over the fast main track. It was another 4 1/2 lengths back to 56-1 longest shot Terra's Angel third, while favorite Surrender Now tired on the turn to finish last beaten 48 lengths. 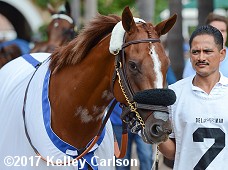 Left: Spectator in the winner's circle. Winning trainer Phil D'Amato said, "After she broke her maiden the way she did (by 5 1/4 lengths on June 23 at Santa Anita), we just kind of let her grow up these past few weeks. This (race) has been on the radar from the get-go and we just let her mature and she sure did. She's still trying to figure it out in some ways. She's just a bunch of raw talent and she's getting better and better."

Right: Spectator in the paddock. Winnng jockey Jamie Theriot said, "She was a runner all the way. She broke sharp and she went on with it. Phil said ‘Ride it as it comes up.' That's what I did. I think she'll run on, too." 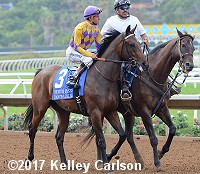 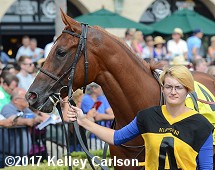 Right: Third place finisher Terra's Angel in the paddock before the race. Jockey Sasha Risenhoover sid, "I was pleased with her effort. I didn't know if she'd be fit enough. She's running on a new track here; a deeper track after she'd been at Lone Star. But she ran well. Just wish we'd have had another work or two in her." 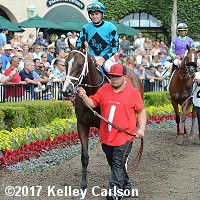 Last place finisher and beaten favorite Surrender Now in the paddock before the race. Jockey Flavien Prat said, "By the quarter pole, she wasn't running at all. I just took care of her coming home from there."