The highlight of the Belmont Park Fall Championship Meeting is the $750,000 Jockey Club Gold Cup (G1), a "Win and You're In" qualifier for the Breeders' Cup Classic, contested at the Classic distance of 1 1/4 miles on the main track. Conditions were excellent for early October, with partly cloudy skies and temperatures in the mid 70's at the historic Long Island facility, with a fast main track and the turf courses rated firm. Suburban (G2) winner Keen Ice was sent off as the 7-5 favorite in the field of 7 off his second place finish in the Whitney (G1). In to challenge him included 4-1 second choice Diversify, winner of the Evan Shipman, and 9-2 third choice Pavel, winner of the Smarty Jones (G3) at Parx.

Jockey Javier Castellano sent Diversify to the lead immediately and he set fractions of 24.17, 47.74, 1:11.42, and 1:36.08 while 2 lengths clear of Pavel second and 11-2 Rally Cry third. Entering the lane, Diversify continued to lead by 2 lengths midstretch. Keen Ice, 6th early, came out 5 wide for room and rallied well but Diversify easily held him off by a length in 2:00.96. It was another 3 1/4 lengths back to Pavel third.

Check out the other races on the card: The Champage and Belmont Turf Sprint Invitational. 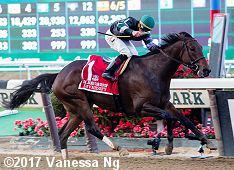 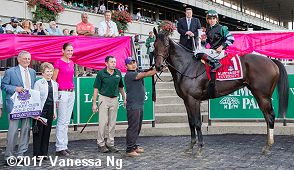 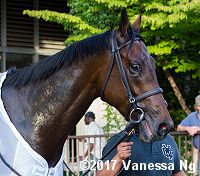 Left: Diversify in the winner's circle. Winning trainer Rick Violette said, "We couldn't have dreamed of a better scenario. The first quarter, going in 24 was ideal. He's done nothing but get better from the early summer until now. He's always been a nice horse, but he's certainly jumped into the major leagues here today. (Keen Ice) might've moved a little earlier than he wanted to because we were always loose on the lead. The pace certainly made the race for us. My only instructions to Irad was to ride him like he rode him in Saratoga.

Right: Diversify heads back to the barn. 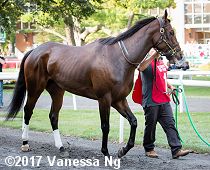 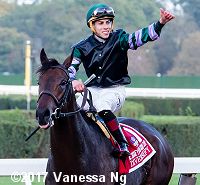 Left: Diversify in the paddock before the race.

Right: Diversify returns after the race. Winning jockey Irad Ortiz Jr. said, "He's a good horse and he's improving. He's growing up and he was that good today. He was ready to run today. He was challenged and responded. Before, he used to play a little bit and would wait for horses. He doesn't do that as much anymore, so he's getting better." 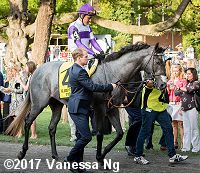 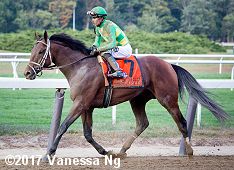 Left: Second place finisher and beaten favorite Keen Ice returns after the race. Trainer Todd Pletcher said, "He was pretty far back and he made a lot of ground up from the half to the quarter pole. In a perfect world, you'd be able to wait a little longer to sustain that kick in the last part. But you've got to start moving when a horse like that is loose on the lead. He ran well. No matter what they tell you, it's really hard to finish second in the Jockey Club Gold Cup six times."

Right: Third place finisher Pavel in the paddock. Trainer Doug O'Neill said, He ran a dynamite race. The race setup exactly how we thought, but the winner is a really nice horse. It was our horse's fourth start - fourth different race track - and I thought he [had] a really good, really gutsy effort today. If he stays injury free I think his future is extremely bright. He showed he can run with these guys and I look forward to a rematch in the Breeders' Cup Classic. We thought there might be a couple of them going at it early, but Diversify took the lead and took them all around there. It was a strong effort by the winner but we are looking forward to running against him again."

Jockey Junior Alvarado sent 31-1 Secretary at War to the lead through fractions of 24.21, 49.11 and 1:13.07 while pressed by Frostmourne and stalked by Yoshida. Entering the stretch, Frostmourne moved up to lead through 1 mile in 1:35.81 before tiring. Yoshida came through on the inside under Manuel Franco and outfinished 14-1 Lucullan by a neck to win in 1:47.07 over the firm course. It was another 1/2 length back to late-running favorite Bricks and Mortar third. 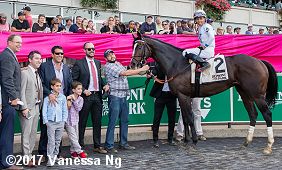 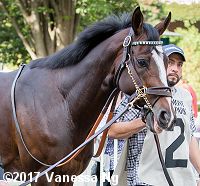 Left: Yoshida in the winner's circle. Winning trainer Bill Mott said, "I thought (Secretary At War and Frostmourne) would be in front of us, and I was hoping we might be laying third and we were. We got the benefit of saving the ground today and that didn't hurt him. The horse and rider both showed good courage. The rider showed good patience and when he asked him he had enough horse to get in there. It looks like Bricks and Mortar went for the same hole and we were able to get there first. Actually, it looked like Frostmourne came over a little bit and crowded both of us."

Right: Yoshida in the paddock before the race. Winning jockey Manuel Franco said, "I rode with a lot of confidence, as Bill told me. I expected to be third or fourth, saving ground, covering the horse up, like I did, and just waiting for the hole. By the eighth pole, we (Franco and Joel Rosario aboard Bricks and Mortar) were going for the same spot, but I had a lot of horse and my horse took off and went through. We were going to the same spot, but I had more horse than him so I got his spot." 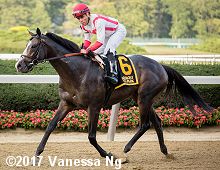 Left: Second place finisher Lucullan heads out for the post parade. Jockey Kendrick Carmouche said, "I couldn't have scripted that trip any better. My horse ran his race. I thought he did everything perfect. Mr. Kiaran (McLaughlin), I'm sure he's very pleased with the way Lucullan ran. I very pleased with him. Since he switched over from the dirt to the turf, I told Mr. Kiaran this horse could be anything. He just had to learn to level off the last part. He's going to get to that point where they're not going to beat him."

Right: Third place finisher and beaten favorite Bricks and Mortar returns after the race. Trainer Chad Brown said, "He had a rough trip out there. I thought it would open up for him [in the late stretch]. I thought he was best." Jockey Joel Rosario added, "I thought we got a good trip and turning for home, I had my spot but the other two horses kept pushing me in and I had to lose my position at that point."

Check out the other races on the card: The Champagne and Belmont Turf Sprint Invitational..